You are here: Home / Fitness / Why The 10% of Your Brain Myth Is Probably A Little Bit True

I ran across this quote by Muhammad Ali the other day: 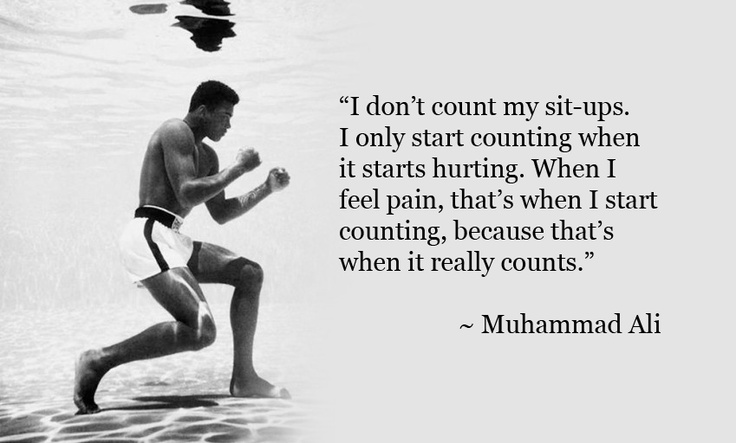 You can hear Arnold Schwarzenegger quote him in this video, which is well worth watching if you have time:

One of the things that always amazes me about the human body and mind is their ability to keep going. Despite what your mind tells you, you almost always have more left to give.

There’s a myth that you only use 10% of your brain. It comes up again and again. In fact, it came up the other day when I watched Lucy. The movie is based around the idea that we only use a small proportion of our brains. It asks what would happen if we could unlock the other 90%. Limitless is another and, in my opinion, better movie based on the same concept.

The idea that we only use 10% of our brains has been shown to be untrue time and time again, but we keep hanging onto the idea because we want to believe it’s true.

And even though it’s not true in any real sense, I think there might be a little truth to it. While most people can access more than 10% of their brains, the majority of us only access 10% of our ability.

Movies like Lucy and Limitless are fascinating because people know they can do more and yet they don’t do more.

In my experience, some people don’t access their full ability because they don’t access enough of their will and because humans are really bad at dealing with pain. Our pain tolerance sucks because we’re told pain is bad.

Pain lets you know you’re getting close to the edge of your comfort zone.

Because we’re taught that pain is bad, most people stop when they start feeling pain. Their comfort zones stop growing. They go into pain avoidance mode. They stop pushing their limits.

But there’s another way to do it – a way that allows you to access more than 10% of your will and to do things that most people are physically incapable of doing.

Instead of seeing pain as the stopping point, see it as the starting point. Instead of stopping when you start hurting, start counting only when you feel pain. That’s when the workout really begins. Stop seeing pain as a warning and start seeing it as an indicator that you’re getting close to doing something you haven’t done before.

*Note: It takes a while to train yourself to be able to do this. Over time you’ll learn the differences between pain, hurt, and injury. You can feel pain and even hurt, and keep going, but sometimes you do risk injuring yourself when testing your limits, but you can learn to do this in a smart way.

This is what draws me to endurance activities, even though I’m not the best endurance athlete in the world. When most people give up (at 26.2 miles), the real race is just getting started. That’s when it’s on.

This is part of the reason that I’m doing my next big project – to train myself to believe that nothing is impossible. That even if something seems insane, it’s still doable. That you just have to keep pushing.

On a lower level, this is why your cold shower has to be cold. You don’t start the five minute timer when you get into the shower. You start it when the water’s freezing cold. Because you’re not worried about what normal people think. You’re interested in making the penguins uncomfortable.

I wrote a post about David Goggins almost three years ago and this quote from him still haunts me when I’m on a long run or doing something that I’m having a hard time with:

“WHEN YOU THINK YOU ARE DONE YOU’RE ONLY 40% OF WHAT YOUR BODY IS CAPABLE OF DOING. THAT’S JUST THE LIMIT THAT WE PUT ON OURSELVES.” – David Goggins

I find myself asking “what if?” What if I had 60% more left in the tank when I’m tired and worn out, and all I want to do is give up?

What if you could push further?

I don’t know if Limitless and Lucy are on to something, but I’m willing to find out.

I’m about to take on a new challenge that we’re announcing on Tuesday. It’s going to push me further than I’ve ever gone before. It’s going to be the toughest thing I’ve done in my entire life. I’m going to have to embrace the suck and prepare to suffer to get it done. Stay tuned and check in on Tuesday for the full announcement.