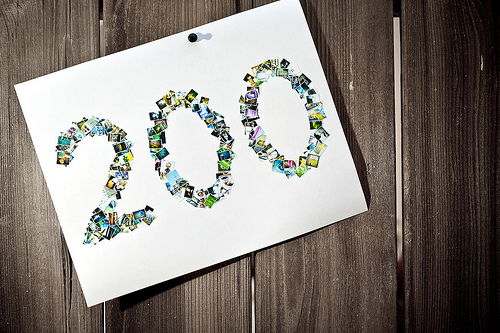 I was looking through my archives last week and realized I was coming up on a big number.

Huh. Today’s post is the 200th I’ve written on the blog. There’s nothing significant about the number per se – sure, it’s nice and round, but by itself it’s nothing special. I didn’t plan on it and I wasn’t counting down, but somehow over the past couple years, I’ve written 200 little stories.

The large majority of those came when I still had my regular 9-5 job. When I started out, it was just some random posts scattered whenever I felt inspired about whatever I felt like writing. Then, for a while I did 3 posts every week. Then 2 a week for close to two years. In between, I missed a few posts here and there, but always getting back on track. If there’s one thing I’m good at, it’s being persistent.

You can read all 200 in the archives, but I pulled out a few of my favorites below:

Boom. There’s a lot more in the archives (200, conveniently, to be exact). If you feel so compelled, take a look through and find something you might have missed if you’re new to the blog.

Two years ago, I wouldn’t have imagined that a community would develop around the idea. Or that I would have developed an apparel line, written a book, run dozens and dozens of races, finished a half Ironman, ran a marathon, jumped out of a plane, jumped off a bridge, or done some incredible road trips, and met people doing everything from starting their won fashion line to walking across america. I was just a guy tired of his life working at UPS and wanted to make a change. So I did…

Tomorrow I’m releasing Impossible TRI – it’s designed to help you run your first triathlon in 3 months and help you make a concrete change in your own life to do something you never thought you could do.

Impossible TRI is another story line that’s part of the bigger overarching one that’s going on here. Growing piece by piece and story by story. 200 little story lines so far. A lot more left to go.