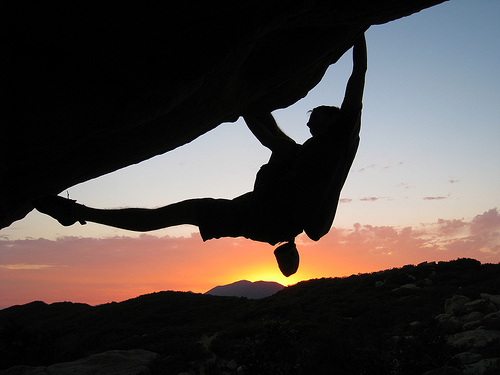 A little boost of inspiration for the day

“We are all faced with a series of great opportunities brilliantly disguised as impossible situations.” – Charles R. Swindoll

“I know the power obedience has of making things easy which seem impossible.” – Saint Teresa

“Nothing is impossible. Some things are just less likely than others.” – Jonathan Winters

“I only want people around me who can do the impossible.” – Elizabeth Arden

“Without faith, nothing is possible. With it, nothing is impossible.” – Mary McLeod Bethune

“A symptom of the revolution: When we state something is impossible in theory, but then change our minds when we discover that it is possible in practice.” – Seth Godin

“We have to do the impossible, but it is possible.” – Kevin Garnett

“By striving to do the impossible, man has always achieved what is possible. Those who have cautiously done no more than they believed possible have never taken a single step forward.” – Mikhail Bakunin

“To achieve the impossible; it is precisely the unthinkable that must be thought.” – Tom Robbins

“The limits of the possible can only be defined by going beyond them into the impossible.” – Arthur C. Clarke

“The man of the future may, and even must, do things impossible in the past and acquire new motor variations not given by heredity.” – G. Stanley Hall

“The difference between the impossible and the possible lies in a man’s determination.” – Tommy Lasorda

“I wouldn’t say anything is impossible. I think that everything is possible as long as you put your mind to it and put the work and time into it.” – Michael Phelps

“I have learned to use the word “impossible” with the greatest caution.” – Wernher von Braun

“Every revolutionary idea seems to evoke three stages of reaction. They may be summed up by the phrases: 1- It’s completely impossible. 2- It’s possible, but it’s not worth doing. 3- I said it was a good idea all along.” – Arthur C. Clarke

“Most of the things worth doing in the world had been declared impossible before they were done.” – Louis D. Brandeis

“Man is the only creature that strives to surpass himself, and yearns for the impossible.” – Eric Hoffer

“What is the beautiful, if not the impossible.” – Gustave Flaubert

“All things are possible until they are proved impossible – and even the impossible may only be so, as of now.” – Pearl S. Buck

“The young do not know enough to be prudent, and therefore they attempt the impossible – and achieve it, generation after generation.” – Pearl S. Buck

“Believe and act as if it were impossible to fail.” – Charles Kettering

“Some of the world’s greatest feats were accomplished by people not smart enough to know they were impossible.” – Doug Larson

“It’s absolutely impossible, but it has possibilities.” – Samuel Goldwyn

“All of us failed to match our dreams of perfection. So I rate us on the basis of our splendid failure to do the impossible.” – William Faulkner

“I tell you the truth, if you have faith as small as a mustard seed, you can say to this mountain, “Move from here to there” and it will move. Nothing will be impossible to you.” – Jesus Christ

“The most rewarding things you do in life are often the ones that look like they cannot be done.” – Arnold Palmer

“Only he who can see the invisible can do the impossible.” – Frank Gaines

“Man is so made that when anything fires his soul, impossibilities vanish.” – Jean de la Fontaine

“Most of the important things in the world have been accomplished by people who have kept on trying when there seemed to be no hope at all.” – Dale Carnegie

Which one was your favorite? Tell me in the comments!

–> The first installment of 25 impossible quotes