You are here: Home / Hacks / 5 Mindset Shifts You Need To Make To Do The Impossible

Everything starts with your mindset.

If your head’s not in the right spot, you won’t be able to execute effectively.

Physical challenges are 90% mental (that’s why I love them). That’s why I talk so much about cold showers. They force you to physically face mental blocks head-on. They give you physical encounters with usually intangible obstacles.

If you want to do something hard, difficult, or seemingly impossible, you have to start with mindset. Here are five mindset shifts you need to make to do the impossible:

Realize that Everyone Is Normal

Everyone is a normal person. You’re normal. Richard Branson is a normal dude. Get your head around that.

There are no special people. The people you think are special just work their tails off, repeatedly find and capitalize on opportunities, and get lucky (luck is a case of hustle + timing). No one “just” gets lucky.

Don’t make yourself feel better by trying to convincing yourself Richard Branson is just special.

He works his tail off.

Get outside your head. Stretch your mind. Dan has tons of these frameworks and parlor games. His latest one, the 737 challenge, asks what you would you if you had to make fifteen million in seven years or your mother or someone would die. What would you do?

The goal is to change your entire basis for reality – the way you think about things. Instead of focusing on how to make 1 or 2K/ month, start thinking about how you could make 10, 20 or 50K/ month.

It takes a different mindset to get you to that level.

I have this as a sticky note on my desktop: 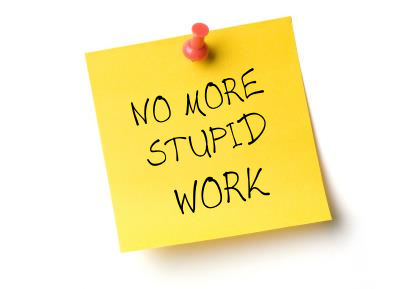 Stop doing stupid work. Don’t waste your time, energy, or focus on stuff that doesn’t need to be done by you.

Do The Dirty Work

The dirty work is where the money is.

Get passionate about solving people’s problems.

There are tons of jobs that “nobody” wants to do, and they’re willing to pay for someone else to do them. There’s your opportunity.

Do the stuff that nobody else wants to do. Solve problems that people want to have solved.

Realize that You Can Do Anything You Want To Do

You can quit your job tomorrow. You can pack your bags, and get a plane ticket to anywhere in the world.

You can do that now.

You don’t need anyone’s permission. You can literally do anything you want.

You can do whatever you want. Wrap your mind around that.

Just let that sink in.

Now, go take cold shower, change your mindset, and get after it.

Did one of these mindset shifts resonate with you? Share it with a friend.