You are here: Home / Hacks / An Unexpected Ass Kicking

You can read the followup to this post here.

I sat down at yet-another coffee shop in Portland determined to get some work done, catch up on some emails and write another blog post.

About 30 minutes into my working, an elderly gentleman at least 80 years old sat down next to me with a hot coffee and a pastry. I smiled at him and nodded and looked back at my computer as I continued to work.

“Do you like Apple? As he gestured to the new Macbook Air I had picked up a few days prior.

“Yea, I’ve been using them for a while.” Wondering if I was going to get suckered into a mac vs. pc debate in a portland coffee shop with an elderly stranger.

“Do you program on them?

“Well, I don’t really know how to code, but I write quite a bit and spend a lot of time creating online projects and helping clients run their businesses.”

“I’ve been against Macintosh company lately. They’re trying to get everyone to use iPads and when people use iPads they end up just using technology to consume things instead of making things. With a computer you can make things. You can code, you can make things and create things that have never before existed and do things that have never been done before.”

I nodded my head in agreement and laughed to myself – thinking that would be something that I would say and the coincidence that out of all the people in the coffee shop I ended up talking to, it was this guy. What a way to open a conversation.

The old man turned back at his coffee, took a sip, and then looked back at me.

“In fact, I’ve done lots of things that haven’t been done before”, he said half-smiling.

Not sure if he was simply toying with me or not, my curiousity got the better of me.

Oh really? Like what types of things?, All the while, half-thinking he was going to make up something fairly non-impressive.

I invented the first computer.

I created the world’s first internally programmable computer. It used to take up a space about as big as this whole room and my wife and I used to walk into it to program it.

What’s your name?”. I asked, thinking that this guy is either another crazy homeless person in Portland or legitimately who he said he was.

Sure enough, after .29 seconds, I found out he wasn’t lying to my face. Russell Kirsch indeed invented the world’s first internally programmable computer and as well as a bunch of other things and definitely lives in Portland. As he talked, I began googling him, he read my mind and volunteered:

He stood up and directed me to a variety of websites and showed me through the archives of what he’d created while every once in a while dropping some minor detail like:

I also created the first digital image. It was a photo of my son.

At this point, I learned better than to call Russell’s bluff, but sure enough, a few more google searches showed that he did just that. 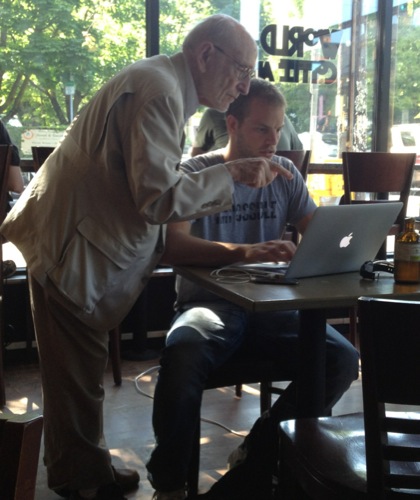 (Photo by Joel Runyon)
Want to mess with your mind? Without the man in the photo, the photo of this man wouldn’t exist. *mind blown*

As he started showing me through the old history archives of what he did while any hope of productivity vacated my mind as I listened to his stories and picked his brain about what he had done.

At some point in the conversation, I mentioned to him:

“Wait”, I said, pausing at his last sentence “What was that quote again?”

“Nothing is withheld from us what we have conceived to do.”

That’s good, who said that?

God said it and there were only two people who believed it, you know who?

God and me, so I went out and did it.

Well then, I thought – as he finished showing me through the archives – I’m not going to argue with the guy who invented the computer. After about 20 minutes of walking me through his contributions to technology, he sat down, finished his coffee,  glanced at his half-eaten pastry now-cold, checked his watch and announced:

With that, we shook hands, he got up, walked to his car and drove off as I just sat there trying to figure out what exactly had just happened. As I sat there thinking: two things he said reverberated in the back of my mind:

The first meaning: if you’ve conceived something in your mind, decide to do it, and are willing to put in the work – nothing can stop you.

The second is fairly self-explanatory but carries the extra weight of it coming from the guy who invented the very thing that’s letting me type these words out on the internet.

Time to step it up.

You can read the follow up to this post “7 Lessons I’ve Learned From My Encounter with Russell Kirsch” here.