You are here: Home / Adventures / Bouncing Back & Setting PRs 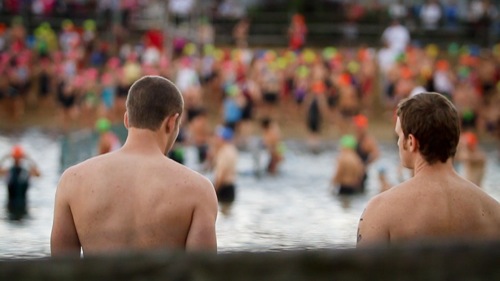 Me & Johnny B Truant Before The Race

After my last race, I needed to bounce back in a big way. I was disappointed because I knew I could do better than I had. And I knew that I was stepping it up in a big way this week. I was doing my first Olympic distance race of the year and I was meeting Johnny B Truant for the race as well. We’ve been talking back and forth about doing a race together, and finally found a good one, so I had to make sure old man Truant didn’t beat me.

We got to the race at about 6:30am and I found Johnny right off the bat. Amazing how well you can spot people from their twitter profile. After we got our stuff in the transition area ready, we headed down to the beach for the start of the race.

We were both in the last wave  of swimmers. This didn’t mean much other than we got to wait around a while and got to hear the mini-canon go off every time a wave started. No matter how much we tried to predict it, we still almost crapped our spandex every time it went off. It was LOUD. Our wave came up and we jumped in. I always get caught up in the flurry of kicking, pushing, and grabbing and try to swim faster than I really should, so I tried to focus on swimming at my pace. Otherwise, when I let others push me faster than I should go, I end up in the middle of the lake with nothing left. I’m not a great swimmer, but I can can swim 400m in about 8 minutes, so I tried to use that as my marker. I reached the first 400 at about 7:30 and was pretty happy with that as I tried to maintain that pace.

I got around to the  the halfway mark at about 15 minutes – right about where I expected to be. I made the turn and started to round the corner to come back, I looked up and realized I still had a full half mile to swim. “It’s already half-way over”, I said to myself, trying to convince myself that the end of the swim meant I could rest (Ha!). I was getting fairly tired and alternated the last half between freestyle and breast stroke in an attempt to just keep moving, finish the thing, and get out of the water. 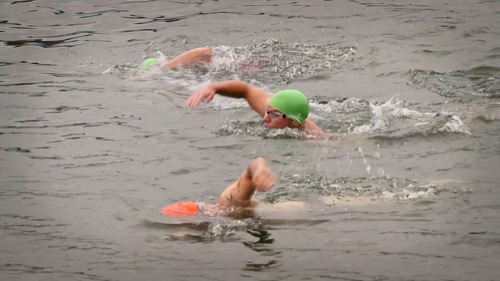 I finally got to the shore and ran a short little run along the beach to the first transition area as I looked down at my watch. 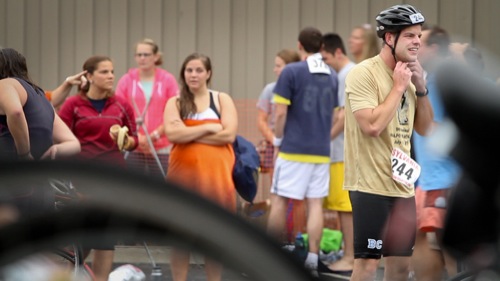 As I got to the transition area, I saw Johnny up ahead – he looked like he had beat me out of the water by about 30 seconds. He was trying to actually beat me! I wasn’t going to let that happen. I ran into T1 and grabbed my stuff. After struggling with my shoes, I threw my helmet on, grabbed my Camelbak and jumped on my bike and I was off. 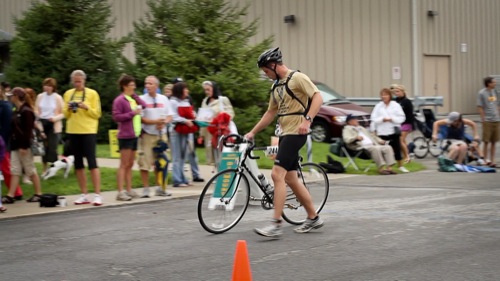 I jumped on the bike and started pedaling. I’ve had trouble with my bike lately. It’s a decent road bike for the $150 I paid for it, but it’s been showing it’s worth lately. Last race, I was stuck all in second gear ALL RACE. I wasn’t too excited to have that happen again, so I fiddled around with the tension levers to get the bike in the right gear and let it be as I hoped it wouldn’t drop down.

The one good part of being towards the middle of the pack of the last wave of swimmers is that you don’t have anywhere to move but up, because there aren’t many people behind you. I quickly caught up to a group of bikers and played leapfrog back and forth with them for a good 6-8 miles. After a little bit of that, I decided I had enough and broke away from them, looking for the next pack of bikers. 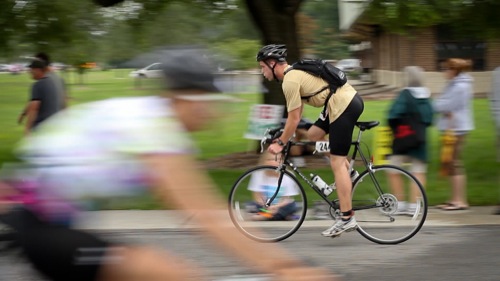 I caught a few small groups of riders, but eventually outpaced them and found myself alone. I wasn’t far ahead of people as much as I was just at a completely different pace than everyone else. About an hour or so in, around mile 18 I guessed, I took a hammer gel and kept pushing away. The camelbak added some extra weight to my back, but more than made up for it in keeping me hydrated. I don’t think I fully realized how little water I’ve been drinking on the bike parts of the race. It’s really amazing that even though my legs were tiring out and I was getting sick of being in the saddle (what cyclists call the bike seat), I felt really good.

As we pulled up on miles 25-26, things started to get crowded again. It seemed like everyone in front of me had started coasting and everyone in back of me decided to finish the bike strong so we ended up with a good sized group all coming to the transition area together.

As we came in, the volunteers were screaming at us to slow down. Apparently the transition area was slick and a rider had bit it pretty hard a few minutes earlier. I slowed down, and jumped off as I ran my bike into transition.

T2 is always pretty straightforward. Unfortunately, my place in my bike rack was taken by other bikes who had been left carelessly by owners who were in a hurry (I can’t really blame them). I had two move two bikes out of the way, so I could actually rack my own, which slowed me down by about 45 seconds – a lot more than I would have liked. Shaking it off, I dropped my helmet and Camelbak, switched out my shoes and took off.

I looked down at my watch – almost 2 hours exactly. Holy Crap! I’ll run this thing under 3 if I can just hold a 10 minute pace for 6 miles. Cake. Let’s do this.

Every time I get off my bike and try to run, my legs feel worthless. However, I felt pretty good from the bike having stayed well hydrated and determined that I was going to simply pound out the first mile at a 10 minute pace and then see if I could pick it up from there. I don’t know what I had in me, but as I finished the first mile in 8:30. At that point, I knew I felt better than I usually did, so I started picking out people, using them as targets and passing them one by one. I knew I was going to finish under 3 hours. So I kept pushing and never really slowed down. I downed two gel packs in the 6 miles, and felt really good. As I passed the 6 mile marker and headed for that last .2, I kicked it up a notch and sprinted the last few tenths of a mile as i crossed the finish line in full stride. 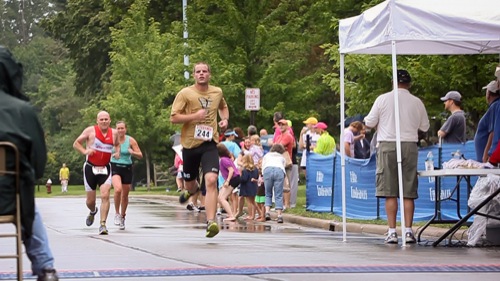 Why Under 3 Hours is a Big Deal

I ran the Chicago Triathlon last year. I “did” finish, but I almost died at the end. The day was hot (90 degrees), the race actually ran out of water, I lost/broke three (3) methods of timing and it was the farthest distance that I’d ever run up to that point.

I finished in 3:26:35 and wanted to die. I was so dehydrated and my electrolytes were so messed up that for a week after the race, that everytime I stood up or laid down quickly, the world started spinning. Makes you want to do it again, huh?

Crap. This doesn’t really speak as to how great I am now, as much as it speaks to how bad I USED to be. I’ve done a ton of races between last year and now and it’s fun to see how far I’ve come. I’m not a pro by any mean – you can tell that pretty quickly by my bike, my shoes and my time, I know. But, when you think about what can happen in a year and how far you can go, it’s pretty impressive.

Not only that, but it was actually my fastest timed 10k I’ve run…ever! Sure, I’ve only done one other timed 10k, but this time was still 2 minutes faster than that race, even after biking 26 miles and swimming almost a full mile. I’ll take it!

I’m not done by any means. I still got beat by a lot of people. A lot of people. I can still go faster. A lot faster. But, I finished this race strong and I still had a lot left. I’m glad I still have more races on the agenda. I can push myself farther. I can do something else. I can keep seeing what ELSE is possible. 30 minutes better is a good motivator. What else can I do? 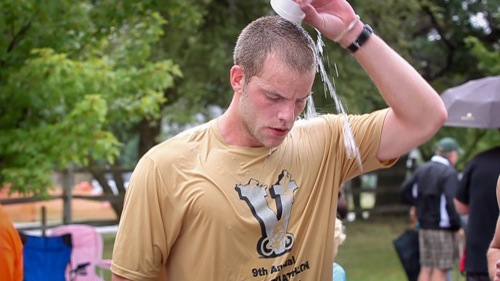 Most impossible things are hard to do alone. I appreciate these guys for helping me out:

Daniel Haley found out that I was racing in Sylvania, and offered to host me AND my brother at his house all the way out in freaking Ohio. I mentioned something about the race, and he invited me AND my brother to stay in his house, sleep in his bed, eat his food, into his house, and generally get to hang out with his awesome family. Check out Daniel’s site. Thanks Daniel!

Johnny B Truant for coming out all the way from Cleveland to race me. We weren’t really ‘racing’ against each other, and we honestly didn’t see each other during the race at all, but it was fun to do it with someone else and have a good thought-provoking chat after the race. Johnny killed it in his first event too! Read Johnny’s Killer Blog. Thanks Johnny!

Seth Haley for taking the best triathlon photos I have up till now (and he wasn’t even trying to shoot photos). Seth & Daniel are working on super secret video project and we shot some footage the day before (which may or may not involve me doing some sweet parkour moves). Seth decided to bring the camera to the race to get some more footage, and ended up taking all the photos you see here from “stills” that he took from the video he shot. Needless to say I can’t wait to see what the actual video footage looks like. Check out Seth’s site here. Thanks Seth!

UPDATE: Johnny also would like me to point out that it was raining the entire time. Something I apparently forgot to mention. To be fair, between the water, rain and sweat, I was soaked basically the entire time, the water was just coming from different sources. Still, it makes Seth & Daniel’s time filming & shooting in the rain that much more impressive. 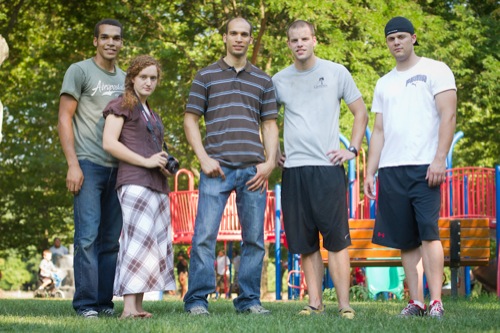 Seth, Harmony, Daniel, Me and Jason