You are here: Home / Fitness / Cardiovascular Proof That Smoking Is Bad For Your Health 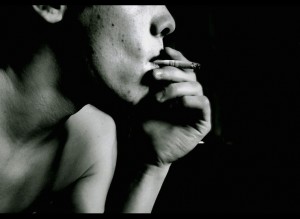 If you haven’t noticed there’s been a lot of noise the past day or so about the four bad health habits that can make you die faster.  12 years faster.  Turns out smoking, drinking, doing nothing and eating like crap aren’t good for you after all!  While a lot of us know that at least cerebrally that those are bad for us, I experienced something the last two days that helped me understand it a bit more physically.

Yesterday, I went out with a bunch of co-workers to celebrate my boss, Todd’s, birthday. It was a pretty good time.  However, apparently Indiana doesn’t have the same non-smoking rules that I’m used to in Illinois so needless to say there was a lot of smoke.  Now I’m not terribly bothered by smoke, and besides my clothes smelling bad afterwards, I didn’t really think anything of it.  We were there for a few hours and I got back late and realized I still needed to go on my run for the day.  I went out to do my usual run and even though I felt like I was pushing myself , I ended up running my slowest 2 mile yet (15:46).  Not only that, but I came back wheezing & coughing that night until I went to sleep.  I don’t know if it was the combination of the smoky air & running, but something made me feel not good.  I was a little discouraged…

I went out running late again.   This time without the sitting in the smoky bar for three hours prior (genius idea right?).  I ran the exact same route and I pushed myself in the exact same way and ended up running my fastest 2 mile yet (15:06).

So I ran 40 seconds over 2 miles after not sitting in smoke all night.  That was really the only variable.  Now I know neither time is really that great (There are lots of people faster than me) and it could be that maybe my lungs are just pansies (I’m still actually wheezing/coughing a bit after running).  However, I think it does matter and it’s important to see that even small decisions you may not even think twice about – like sitting in a smoky bar – can have a significant effect on your performance & influence your chances of accomplishing your goals.