You are here: Home / The Crabs in a Bucket Phenomenon

The crabs in the bucket phenomenon.

Who must I show to bust my flow?
Where must I go? Who must I know?
Or am I just another crab in the bucket?
‘Cause I ain’t havin’ no luck with this little rabbit’s foot, f**k it – Eminem, 8 Mile

The Crabs in a Bucket Phenomenon

“Crabs in a Bucket” – Ever heard of this phrase?

If you’re not familiar, it’s the concept that crabs in a bucket will try to escape. If they left each other alone, and let their fellow crabs climb, they’d easily be able to get out of the bucket.

But, that doesn’t happen.

Instead, what happens is as a crab will try to climb out of the bucket, other crabs will pull him down. This makes sure that no matter how hard any of them work – none of them make it out. If this sounds familiar, it’s very similar to the tall poppy syndrome.

Some would call this a “zero sum mentality.” Some would say it’s the embodiment of “if I can’t have it, neither can you.”

So why should you care? 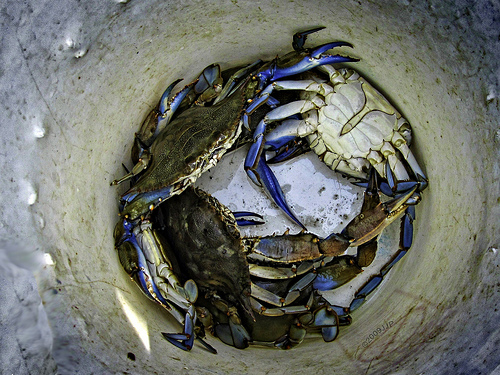 Well, anytime you aim to do something impossible – sometimes the challenge isn’t even the new challenge. Sometimes, the challenge is getting rid of all the people holding you back.

You’ll see this if you’re start to get in shape: “Why do you go the gym so much?”

If you change the way you eat: “why are you going so crazy over food?”

IF you try a new venture: “oh wow, that’s so risky”

If they see you move, quit your job or do something “different” – then they immediately revert back to crab behavior and try to pull you down.

It can be frustrating and I used to get mad about it, but then I realized that’s just what crabs in a bucket do…

How To Get Out of the Bucket of Crabs

The hard part about changing your life is that sometimes it requires changing your circle of friends. Accepting the challenges that life brings and deciding that no matter what the other crabs are doing around you – you’re gonna get the hell out of that bucket.

When I was quitting my job – I moved to the Dominican republic to save money, get six pack abs and launch my first digital product and I got no end of mocking from those I told it to.

I had people asking me “what are you doing” “you’re really leaving your job?” “there’s no way that will work.”

People made jokes, laughed at me, the name “IMPOSSIBLE”, and everything in between. I was determined, but looking back on it – some of it was downright mean.

That said, things are different now.

Because once you actually go out and do the thing you talked about – the same people come right back around.

It’s annoying, but it’s the game you have to play if you sign up to do something IMPOSSIBLE.

If you want to get out of the bucket and ready for what it takes, here’s what’s helped me over the year.

Create your impossible list – then start after it. You’ll find out that it’s a lot easier to move yourself forward when you have a clear idea of what you’re going toward and why you’re doing it.

Sometimes the best thing you can do if you find that your bucket is a bit overwhelming is to find a new bucket. This is one of my favorite “quick” hacks because it’s so fast and straightforward. It jolts your body into adapting to a new environment.

This is not a bulletproof strategy – because no matter where you move – there will be crabs pulling you down – but if you have a specific task that seems to be harder than normal – this is one way to bust through that plateau.

I have no patience with people who complain about bullying. People are terrible. You will never get people to stop bullying people and no matter where you go (even if you change buckets), you’ll always have crabs pulling at you.

So, instead of wishing it wasn’t so, realize it just is. Then become impervious to the comments, the talk, the nonsense. Focus on what you have to do. What you must do. Realize that the comments are distractions. If you believe them, then you stop. If you look at it as noise – then all you have to do is put on your noise-cancelling headphones and keep trucking.

Look In The Mirror

Combine that with spending hours looking at the photoshopped junk on instagram pretending to be real and they compare it to the fake image of themselves they have in their head.

The only time people use the mirror is to make sure their external appearance looks okay.

I like to use the mirror a little differently.

I like to use the mirror to look at your soul.

Look past your face, the wrinkles, the skin, and appearance and look into your eyes. Actually see yourself.

Then, have a conversation with yourself like you would with one of your friends who was trying to do something hard. Remind yourself of who you are, what you’re made of and what you’re capable of doing.

Remind yourself. Then go do it.

Focus On The Next Thing

The thing about big goals – is that they’re big. Like really big and sometimes it’s hard to even wrap your mind around them. So, if your goal seems too big to keep you going, and you start to feel the tug of the crabs pulling you back down, just focus on the next thing. Not next week, next month or next year.

Just do the next small thing you can do. And keep climbing. Don’t give up.

If you’re ready to bust out of your bucket of crabs – no matter what that is – being overweight, weak, broke, tired, or just bored with your life story – you can change it.

It won’t be easy, it might feel impossible – but it is worth it.

If you’re ready to do that, then well…ƒ

If you couldn’t tell by the name – IMPOSSIBLE is a place where we’re all about pushing your limits and doing the impossible. Pushing yourself and doing the uncomfortable, difficult things and knowing that it’s going to be hard.

Because here’s the reality.

Life is going to bring you down. People are crabs and most of the time, you pushing yourself is gonna make them uncomfortable.

If it was easy, then everyone would do it.

So that’s what IMPOSSIBLE is all about. The place for the people willing to push themselves, embrace the suck and do something impossible with their life. To get stronger, mentally and physically so we can live the hell out of the one life that we’ve got.

If you want to get started, you can join tens of thousands of readers doing the same and join the email list for more goods on how to push your limits, every single day.

See you on the inside.