You are here: Home / Adventures / Creating An Adventure Bigger Than Yourself 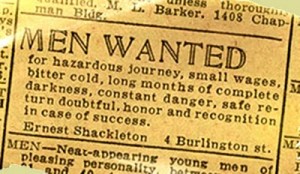 So you started something.

You embarked on an adventure. You began a story. You started out doing the impossible. Something you believed in. Something you thought was a great idea.

So you forged ahead. Threw off the excuses and got going. “Surely people will line up to join me!”, you thought.

And you can’t figure out why…

You Dream Too Small

Most people dream too small and that’s why they never get people to join them. They only dream big enough to imagine what’s possible by themselves. So while they might achieve a few impressive things, they’ll never achieve something impossible, because they’re still dreaming within the realm of their imagination.

They’re only attempting what they believe they can do alone. What’s possible for them.

And that’s boring to other people.

If you can do it on your own, why do you need my help?

That’s what most potential followers think.

But most people trying to start something and trying to lead others, don’t realize that. They want to succeed so they dream small, aim low and settle for good, when they could go for great.

Their adventure isn’t big enough for anyone else to join in. So nobody does.

The story arc they create is all about themselves. So nobody else gets involved.

They only do what they can dream up doing alone. So nobody helps.

Their own perception of what’s possible on their own literally limits what’s actually possible, because they’re limiting the capabilities to the constraints provided by their small vision. As a result, the very people they’re repelling the very same people you’re trying to attract.

But you have to dream big.

You might be talented, but you’re not that talented…and even if you are, you don’t have 100x the time.

The best thing you can do as a leader is to create more space.

Create a vision so massive that other people get sucked in by it’s gravity.

If you’re wondering why people aren’t coming along on your journey, it’s because there’s no room for them. You have to create an adventure bigger than yourself.

Your vision is too small.

You ambition is too tiny.

The future that you’re offering is not compelling enough to draw others in.

Honor and recognition in case of success. – Sir Ernest Shackleton,

That was the ad that Sir Ernest Shackleton put out for the first expedition to Antarctica in 1914. He wasn’t messing around.

If you want to lead these people, you need to give them  a vision worth following. It’s not an option. It’s imperative. You HAVE to.

Invite them on an adventure. Create a story arc worth paying attention to. Give them a purpose worth their time.

Create an adventure so big, so huge, that they’re compelled to join you, practically sucked in by the gravity of the purpose.

Sure, you’ll get a lot of people running scared in the opposite direction, but you don’t need those people – in fact, you don’t even want them. They’re interested in doing small, possible things. Things that are quite certain of success, but not necessarily worth doing. Besides, they’re the same people that usually show up at the end of the adventure, after you’ve fought the hard fight and lived through the adventure when it looks like you’ll be coasting back into the harbor safely. They want to realize the reward of doing the impossible, without having to actually do it. They say they want to go on an adventure and have stories to tell, but when you’re staring at a sheer wall of impossible, they disappear.

Create a daunting adventure that you can’t do on your own and you’ll attract the exact people you need in order to accomplish it.

Things are getting a lot bigger around here soon. The vision is getting bigger. The adventure is expanding. There are a lot of changing coming soon. Email subscribers are the first to know. We need you. Stay tuned…