You are here: Home / Stories / How I Got Estonian E-Residency (and why you might want to too)

Hey – wanna go to the Estonian Consulate with me today? – I asked my girlfriend.

I need to pick up my e-residency card.

From Estonia. I applied and I have to pick it up at the consulate.

This post has nothing to do with fitness or mindset, but it does have to do with living an impossible life and doing interesting things some / most people might not have even heard of. Plus, it’s on my impossible list. You’ve been warned 🙂

In my quest to do the impossible, I have a ton of things on my list that I solely want to do because it’s interesting.

One of these is slowly coming to fruition as I forge my own character (think Jason Bourne meets James Bond (Sean Connery version) meets Michael Westen meets James Bond (Daniel Craig Version)) and part of that is international business and travel.

So, when there’s an opportunity to expand that territory, to become more global and potentially become a global spy with great fighting skills, I jump on it.

About a year ago, I found out about Estonian e-Residency – a new program put out by Estonia as part of their next-gen digital services designed to make it easy for entrepreneurs to make Estonia their home country. With an eye on the future and focused on location independence, it seemed really interesting.

While it’s not quite a second passport, it is interesting, and I decided to tackle it and see what happened.

But first – an important question….

WHERE THE HELL IS ESTONIA???

Contrary to what you’re probably thinking – Estonia is not a made-up country. It is real. Before we jump in – Estonia is right here. 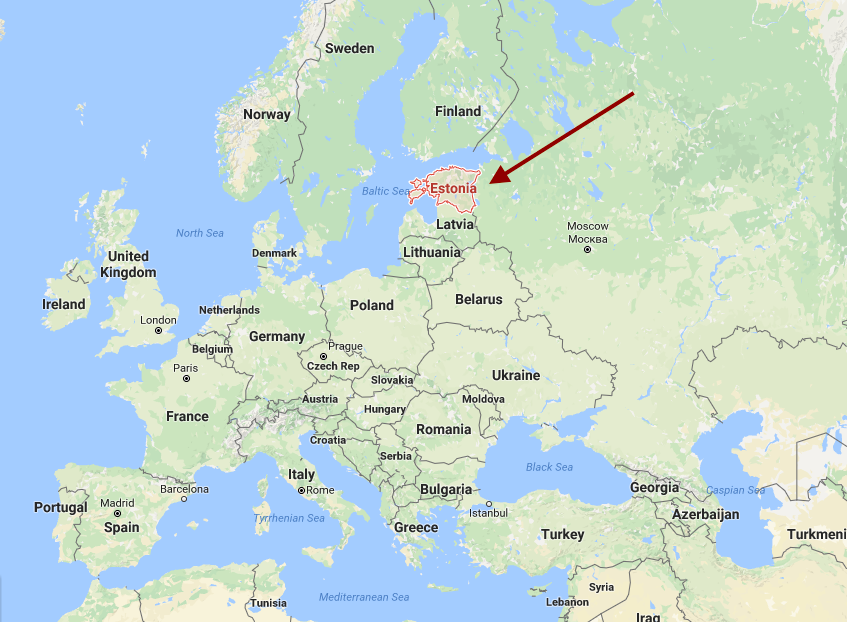 It’s a Nordic / Baltic country (there’s some debate about it), but they’re located right across the Baltic Sea and Gulf of Finland from Finland – so they’re pretty close geographically if you think about the north of Europe just below Sweden / Finland.

Alright – time to dive into the application process.

Actually, it wasn’t ALL that bad. It was a couple pages, mostly background information.

You confirm the information, pay the €100 plus €2 credit card fee, and you’re done!

They run a background check and as long as you’re not a serial killer or have skeletons buried in your closet, you should be okay.

By the way, they process this fast too.

I applied on March 22nd. The card was ready for me to pick up at the NYC consultate on April 6th – so just over 2 weeks from application to issuing.

In comparison, it takes the US typically 6 weeks to process a passport application. 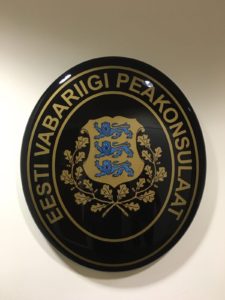 Unfortunately, I wasn’t able to pick up the card right away in New York because (ironically enough), I was leaving to travel around Europe for a couple months.

When I came back stateside, I stopped for a day in New York and decided to finally go pick it up.

I showed up and was the only one at the consulate. They buzzed me in, went back to grab my card, took a little more information to confirm it was me and fingerprinted me.

They gave me my ID card, the packet, an Estonian magazine, and that was it!

I was officially an Estonian e-Resident (and I’ve got the photo to prove it).

In my worldwide quest to become Jason Bourne / Michael Westen / Ethan Hunt, I stopped by the Estonian embassy in NYC for 24 hours to pick up my Estonian e-residency card. I applied 3 months ago, but haven't been back stateside to pick it up. Only 800 people in the US have it – so I'm excited to get it! Blog post coming soon on how to get this and what you can do with it. 👊🏼🇪🇪🌎🌍🌏 #estonia #eresidency

What Does Estonian E-Residency Get You?

So, after all that (okay, it really wasn’t that much work), what do I get out of this anyways?

Multiple passports, a briefcase full of cash, multiple languages and hand-to-hand fighting skills. Plus a yacht and a helicopter. Cool deal, right?

Actually – it gives me none of that.

What it does do is sort of give me a digital identity within Estonia (without actually going). I actually haven’t even been to Estonia before (unless you count the Consulate, which technically is sovereign ground), so I need to put it on my travel itinerary sometime soon.

In reality, there’s 4 main things e-Residency gives you the ability to do:

Here, I can barely pay taxes in Illinois online. In Estonia, you can do almost anything – without even being in the country.

For non-Americans, this is really interesting. You can start a business abroad and get a European bank account without even stepping foot on the continent. If this helps on taxes, etc really depends on your personal situation, but it makes Estonia even more attractive as the economy is becoming more and more global, and people have more access to choose where they live. They have 0% corporate tax until disbursements are made, so you can reinvest and focus on scaling your business in the country. Post-Brexit, this might even be an option for UK residents to continue to have a bank and business in the EU.

It’s going to be interesting to see how useful this is for Americans. Unlike every other country in the world (except for Eritrea), we’re taxed based on our citizenship rather than on where we live or declare tax residency. So, even if I lived full time in Estonia for the rest of my life, I’d still pay US taxes unless I renounced my citizenship.

While there’s been a few thousand total e-Residency cards issued, only about 800 Americans have picked one up.

So why bother? I did this because it’s relatively inexpensive, was a bit of adventure and a really good learning opportunity. Also, the more I learn about Estonia, the more interesting and appealing it becomes.

I definitely want to visit now and I’m seriously considering setting up an IMPOSSIBLE subsidiary in Europe and this makes this much, much easier.

How Long Did This Take?
Just about 2 weeks of total “wait time.” If I lived in NYC, I could have picked this up back in April. The application itself took less than 30 minutes to fill out.

How Much Did This Cost?

How Many People Have Done This?

Only about 800 Americans. I’m told that a few thousand cards have been issued worldwide. Update: You can see live totals of Estonia’s program here. There are currently over 12,600 who received a card.

When are you going to Estonia?

Great question – I hope to make it back to those countries soon (maybe during the winter to catch some northern lights). They seem to appreciate my ultra mountain man beard.

Other Articles on Estonian E-Residency

Also – I know this is a bit off topic from what I usually write about. I love random, interesting challenges like this, and it falls nicely as one of the items on my impossible list. Next up – a second passport!

Also, If you have any questions on the process or the actual card — let me know.

Update: one reader pointed out that Embassies only exist in the Capital. The office in NYC was the Estonian Consulate. The post has been updated 🙂