You are here: Home / Adventures / How To Rock Your First Public Speaking Engagement

Alternatively titled: 7 Things I Learned From My First Speaking Engagement (At a Fortune 50 Company).

Public speaking is consistently at the top of people’s fear list, right next to and sometimes even surpassing death. That’s right, lots of people would rather die than have to speak in public. Sort of dramatic, huh? But even if you don’t want to die from speaking in public, a good 75% of people say they realize increased anxiety from public speaking. The other 25% are lying.

A week and a half ago, I did my first live public speaking engagement at Target HQ – yes that Target, the one with the big red target logo. I was invited to talk to their Target TRI club about running your first triathlon. What better way to kick off my first ever talk than to talk to 70+ people at company which is sitting somewhere in the 30s on Fortune 50 list? No pressure right?

Over the last couple years, I’ve slowly been bashing that annoying thing called fear to pieces, but every once in a while it pokes it’s ugly little head out and starts telling me to freak out. And I do.

So right before my Target talk, I started to tense up (am I really going to speak at Target?), but I managed to calm down, do the talk, survive, and learn a few things along the way. If you’ve got a speaking gig coming up or just want to be able to be able to talk for five minutes in front of people without going catatonic or having to get yourself a change your pants, here are a few pointers:

I can be loud, speak quickly, and be hard to understand in a normal conversation – I know that. When I get nervous or excited (which, lets face it, is quite often), I’ll speak even faster. When my brain really starts going, it works faster than my mouth which means that  I’ll start to speed up talking and my words startoruntogetherwhichmakesitreallyhardforpeopletounderstandme.

See what I mean?

When you’re up in front of people, you’ll have a natural tendency to speak faster than normal. After all, if you speak faster, it’s all over quicker, right? Maybe, but only because people will get up and leave you speaking to an empty room.

Slow down. Nobody’s going anywhere. Use the time to choose your words instead of talkingreallyfastandsayingumsodangmuch. You’ve got plenty of time. Use it.

Spend Less Time On Your Slides…

When’s the last time you went to see someone speak and thought “I really can’t wait to watch their powerpoint presentation.” Exactly.

Seth Godin recommends putting 1 thought on a slide (with no more than 6 words) and creating 200 slides for a 40-minute presentation. I don’t think you need that many slides, but the one-thought-per-slide rule is golden.

Think of slides as placeholders or markers in your presentation. They’re there to hold a thought serve as visual reminders of the points you want to impress upon people. That’s it. No one needs to read 5 bullet points on a powerpoint and watch them fly in from the slide like it’s magic. It’s not 1995 and nobody cares about your bad animation skills. Get to the point and please, whatever you do, never ever ever ever read your presentation off your slides unless the goal of your presentation is to have everybody crying at the end, wondering why you stole 30 minutes of their life that they can never get back.

…And Spend More Time On Your Stories

If your slide are placeholders, your stories should be what’s driving your presentation. You need to answer two things:

Stories are the best way to do this. They’re able to do a little of everything at once. The best stories don’t just feature a character who wants something and is willing to overcome conflict to get it – they’re also relatable. Even if your stories don’t have an explicit moral, you should be persuading people or making them think about something that they wouldn’t have thought about if you didn’t show up. If you’re not telling a story, what are you doing? Unless you’re just there to entertain people, you should have a conclusion that you come to, or a hypothesis that you make people think about.

You want people to walk away from your talk different than when they walked in.

Talk to a few specific people

Find a few people in the audience, make eye contact with them and talk to them. Whether you talking to a crowd of 5 or 500, pick one or two people out in each section of the crowd and talk to each one individually throughout your talk. Everyone says this, but if you actually do this, you’ll be much more specific and conversational to the audience as a whole than if you don’t.

It can be tempting to try and be grandiose and try to speak to everyone when you have a large audience of people, but if you don’t pick out a few people to talk to, you’ll end up picking no one to talk to. Instead of talking to everyone, you’ll end up talking to no one. Pick a few people. Talk to them like you would talk with a friend. It’s a lot more interesting for them and a lot less intimidating for you.

Remember that people want to hear you talk

Remember that wherever you are, you’ve been asked to be there. Whoever is there, wants you to be there. Act like it! You didn’t force anyone to come (and even if you did, act like they want to see you anyways). They want you to be there or they wouldn’t have asked you to come. This is the one thing that’s helped me more than anything else so I’ll say it again.

They want you to be there or they wouldn’t have asked you to come.

They want to hear what you have to say. So act like you’re saying something worth listening to!

A lot of people approach presentations like the audience is a bunch of middle school kids who have to be there and are counting down the seconds until you’re done, so they can leave. Because of this, you have to amuse them in order to trick them into thinking you and your talk are interesting and therefore worth listening to. There’s a lot of techniques people recommend, but I find that they’re all exhausting. Instead of trying to trick people into thinking you’re interesting, it’s much easier to just be interesting. Remember, if they’re there to watch your talk, they probably want to be there.

When you start acting like people actually want to see you, your entire body language shifts. Instead of being timid and scared and desperately trying to win over this audience that has nothing better to do than boo you off the stage, you’re confident. And it will show. When you’re confident, you’re naturally more relaxed, more collected and you’ll be more persuasive (ever been persuaded by someone who wasn’t sure that what they were saying was right?). This leads to the next point…

You know those words coming out of your mouth? Do you actually believe  that they’re true? You should.

It’s already hard as hell to convince other people to believe what you’re saying. If you don’t believe it yourself, you just made it a whole lot harder. Actually believe the stuff you’re saying (this is generally a good rule of thumb anytime you’re saying anything meant to influence others). If you don’t believe the words coming out of your mouth, your uncertainty tends to show through and you probably shouldn’t be saying them in the first place. Even if you’ve gone off the deep end and are talking about things that have no chance of ever being true, you’re better of being delusional enough to believe them yourself. You’ll have a much easier time convincing people to believe you and make it happen rather than simply being dishonest (this is what people mean when they talk about Steve Job’s reality distortion field).

So for my talk, being the smart, forward-thinking person I am, I decided to bring a little flip cam with me just in case they weren’t recording the event as part of training for all future Target employees. When I arrived I found out they weren’t taping it, (I think they’re planning on just bringing me back live for that, right guys? :)). Anyways, unfazed, I set up my camera and had Graeme press play right as I started talking. That’s why I have this video available.

Now wait for it… 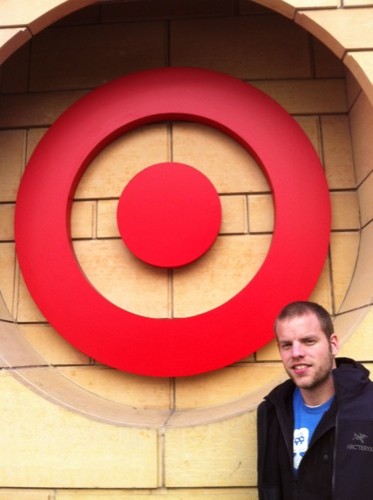 Well, everything was set up right, but apparently the camera decided to cut off just as I was about to start speaking. No joke. So besides the 12 seconds of me standing in front of some room with a big projector on the wall getting ready to talk, I have no actual physical proof I spoke at Target  to 70+ people, other than a few photos of my face in front of one of many target signs all over Minneapolis (and this link on Target.com vouching for me).

It’s really a shame, because now you’ll have to take me for my word that I didn’t entirely freeze up and start crying in front of the room. On top of that, it would have been a good video to post, share and talk about down the road so I’m a little annoyed that my camera seems to have been actively plotting against me. So trust me, if your camera lets you, record your talk! You’ll be able to use it down the road and you’ll mad if you didn’t get it on tape.

I’m still not a public speaking pro – I say “um”, and “like” way more than is good for my health – but every time you do something that scares you, it starts to get a little less scary and public speaking is getting a little less scary for me. Not to mention, I can check off speaking at a Fortune 50 company off the impossible list (right after I finish adding it) without having anyone throw any food at me or walk out in the middle of the speech. Next time, I just need to actually record the stupid thing.

Major props to Katie, Graeme, and Sukie for inviting, hosting and showing me around Target & Minneapolis. Thanks you guys for everything :).