Impossible FM is here! On the inaugural episode of Impossible FM, I introduce the podcast and talk about why I’m bringing it back. I also touch on what to expect and how exactly we’ll be proceeding in future episodes. It’s short and sweet and a lot of fun. 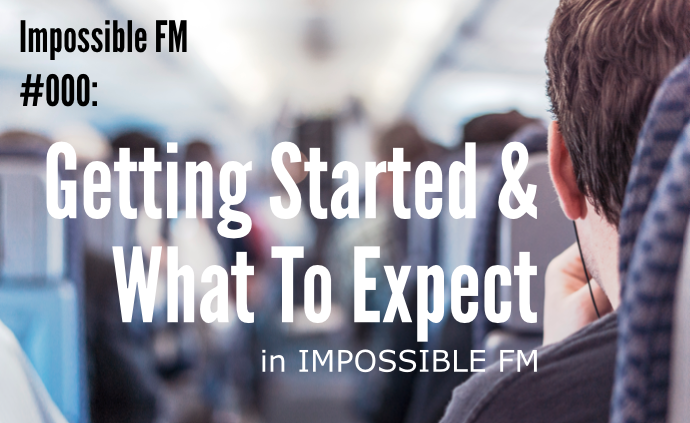 Links Mentioned in this Episode

Where To Listen To This Episode

Enjoyed this podcast? Rate us on iTunes!

Hey everybody. Welcome to Impossible FM the show where we talk about pushing your limits and doing the impossible in fitness, gritness, business, and life. I’m your host Joel Runyon, welcome to the show. Let’s get started!

Hey everybody. Welcome to Impossible FM episode 000. Yes you’re getting in on the ground floor of this podcast. In today’s episode we’re gonna talk about laying the groundwork for what to expect here in future episodes of Impossible FM.

Hey everybody this is Joel Runyon and welcome to impossible FM. I’m your host and welcome to the show, I’m excited to get back into the podcasting game after a few days out. Well, it’s been more than a few days, It’s been a couple of months actually. If you guys remember, if you guys have been around for a while – I used to host a show with Johnny B. Truant called Bigger Better Stronger Faster, BBSF for short. It was really high-rated, very popular. But for a bunch of different reasons, a bunch of timing things and a few other issues, we wounded down and people were upset. People were angry. We got mad amounts of bad email from people saying, “Hey, not cool. You should get back in to the podcasting game.”

So after a couple of months out of the game, I am back. This is episode 000. That’s how new this podcast is. So today’s episode’s gonna be pretty quick. I’m just gonna do an overview of the different subjects, topics that we’ll be talking about here on Impossible FM. Now, a lot of the things we talk on the site at Impossible at ImpossibleHQ.com. There’s a range from productivity to fitness to business stuff to all sorts… all over the map really. So what I’m trying to do is trying to create 3 different focuses that will be either talking about or referencing or getting experts in here to talk with me. Interview 101, hard-hitting interview style. So basically there’s 3 different areas that we’re gonna be talking about.

So the first area is fitness. This is kind of a no-brainer. We’ve done Impossible Abs which is massively popular. We’ve had people have incredibly stories and changes of lives, they’ve lost anywhere from 30 to 80 to 100 pounds in just a few months and it’s been really really successful and we’ve kinda shied away from talking about all the success stories we’ve got coming into our inbox so we’re talking about those more, we’re talking about different fitness strategies to lose fat, and burn fat and lose weight. But we’re also talking about different ways to do other athletic endeavors whether it’s running 100 miles, gaining weight, adding on strength in short amounts of time and other things as long as they have to do with pushing your limits and doing the impossible. So basically doing things that most people think are impossible or scared to do. So the whole realm of fitness is kind of one of our main focuses. We’ve had a lot of success with the people that have gone through our programs and we’re going to delve into that and even more.

The second area is something I would like to call gritness. So this is a new word that I have kind of been using lately. I don’t know if you guys have heard it before or not. I think I made it up.. so you’re just gonna have to deal with it. But, it’s the idea of grit. It’s the idea of this mental toughness aspect of life that’s required if you’re gonna do something that’s difficult. It’s required if you’re gonna do something that’s practically impossible. And the idea is that most people give up really easily. Most people give up way too easily. I have a thing I like to say, most people don’t really fail, they just give up to soon .That’s the concept of this. It’s the concept of continuing to persevere. Continuing to move on and make forward progress even when everybody else that’s normal would give up. And that’s this idea of grit. I actually like the word gritness because it kinda fits along with fitness, gritness, and our next topic which I’ll talk about in a half second. But the idea of gritness, of becoming stronger as a person mentally, a lot of times we talk about getting stronger physically, but also becoming the best version of yourself from a physical standpoint but also from a mental standpoint. How do you train yourself to become a person who’s willing to put themselves in uncomfortable situations and do things that are very difficult. And not just do them when they have to be done, but do them on an active basis. Do them proactively. Even when, you know, there are several other reasons why you can just do the comfortable route. And so this is gonna encompass a lot of things we’ve talked about, as far as different exercises you can do. One of the things that we’ll talk about guaranteed is cold shower therapy. The idea of purposely choosing to make yourself uncomfortable on a regular basis. And so that’s gonna be one of the main things we’ll talk about is we’re gonna have several other strategies included in that. But that’s sort of the focus as far as improving yourself from a mind standpoint and really solidifying the mental toughness aspect of things that really is applicable whether you’re running 100 miles, you’re trying to gain weight, you’re starting a business, or you’re just trying to do something that is new or different or might not be familiar to a lot of people. You’re gonna run into obstacles, you’re gonna run into oppositions, so how do you keep going when you wanna quit. So that’s the second area, gritness.

And the third area is business. This is something that I haven’t talked about as much on the blog but it’s been something that I’ve been doing for the last 4 years. I have.. let’s see. I have officially been unemployed for 2 years and that’s actually sounds.. I don’t know if that sounds good or bad, but, I quit my job 2 and a half years ago. I’ve been working for myself on several different types of businesses. And so everything from running an agency to starting niche sites to starting your own branded site and mini-empire, if you will. I’ve done all three. I’ve had quite a bit of success with all of them and I haven’t talked about them very much because I’ve had my head down in the trenches working on them a lot of times. It’s actually difficult to actually talk about them when you’re working on them on a day-to-day basis. So over the last year we’ve put a lot of systems in place that make these businesses not run on their own, but run a little bit more efficiently without me down in the trenches day to day to day and so I wanna talk about those processes. How to pull yourself out of your businesses. A lot of times entrepreneurs want to get kind of stuff in the day-to-day details of everything and it’s really hard to pull yourself out of that once you’ve got the initial traction, once you’ve got that start. So how do you: One- even decide how to start a business and go about quitting your job and starting this business. How do you make that transition from having a career, having a normal job to freelancing / starting your own project / business / agency, whatever that is. And then how do you go about scaling that into something that’s bigger than just yourself. So a lot of people tend to do this thing where you go from full-time job to freelancing on the side to freelancing full time and then they stay at freelancing full-time, they never really turn it into anything bigger. And so we’re gonna talk about a lot of different things. Through the whole gamut of, “hey, I’ve got a job, I wanna get out of it,” to “okay, here’s the step by step process that you need to take in order to get out of the job, create more freedom in your life, and start doing things that most people don’t either know how to do or too scared how to do. So that’s the whole business aspect of it. And then, you know, all the other fun stuff about creating more sales, driving traffic, all that fun stuff that we had a really good success with through Impossible Ventures and Impossible Agency which are some of the projects we’ve worked with startups and other companies that aren’t necessarily featured on the blog, but there’s a lot of good stories there. So I’ll be sharing those with you throughout the next few episodes.

So that’s it for this show. So like I said, this is gonna be a pretty quick show. The other shows will be a little bit longer. They’ll probably will be in the 20-30 minute range depending on the guest we’re having on the show. It’s going to be a lot of fun. I’m excited for this. It’s good to be back behind the microphone, behind the computer, jumping in the garage van and knocking these out, because, yeah, I enjoy it, and I know a lot of people were saying, “hey Joel you need to get back on the microphone.” And it’s something that I have been thinking too, so we got this setup ready, we’re knocking them out, we’ve got the system down, and it’s going to be a lot of fun. So, thanks for listening to Impossible FM and I’ll see you guys on the next show.

Hey everybody thanks for listening to the Impossible FM podcast. For more tips, blog posts, podcasts, videos, and a whole lot more, check out ImpossibleHQ.com. Until next time I’ll see you guys next Monday morning, right here behind the mic at 8:00 AM Eastern Standard Time. Until then, get out there, go do something that pushes your limits, and do something impossible.