You are here: Home / Podcast / Impossible FM #006: Unknown Unknowns & Why The Better You Get At Something, The Less You Know
[powerpress]

Today on the podcast, I talk about the phenomena of why – as you get better at something, you feel like you know less than ever. I reference Donald Rumsfeld’s quote (which I never thought I’d do on a podcast), and how to practically deal with this interesting and annoying phenomena.

Links Mentioned In This Episode:

Where To Listen To This Episode 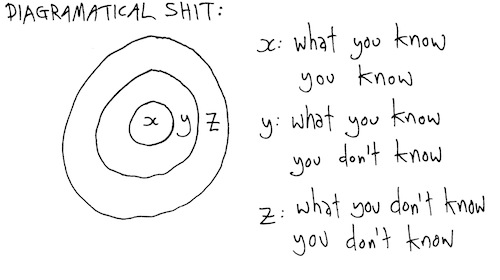 Hey everybody. Welcome to Impossible FM – the show where we talk about pushing your limits and doing the impossible in fitness, gritness, business, and life. I’m your host Joel Runyon, welcome to the show. Let’s get started!

Hey everybody. Welcome to the show. Today we’re gonna be talking about unknown unknowns. So there is this concept that you may or may not have experienced anytime you pick up a new skill, whether it’s running, weightlifting, starting a business, learning a new language where you start off, and you start feeling like “Oh, I’m kind of getting the hang of this”, but then as you progress, you start feeling a little bit like, you’re getting worse over time, or it feels like, relatively, you’re not improving, either as much, or it just feels like there’s a whole lot more out there that you didn’t realize was out there when you signed up. And there’s a couple of different reasons for this. One of them is like the law of diminishing returns. Once you get started on something, you know, the next, you have an exponential improvement off the start, just for doing anything. We talk about people doing Paleo, by eating real food and cutting out junk food.You have an exponential improvement in your health, in the way you eat and the way you feel. But as you add, you know, different tweaking pieces to that diet, there is diminishing returns, so you’re gonna have incremental improvements by removing legumes, or by not eating dairy, but it’s not going to be the massive changes that you experience while cutting out all processed food. And so that applies to everything in life, but what I wanted to address here was a different sort of phenomena or a different sort of way of thinking about things that help me a lot. But it’s an interesting concept and it came from an interesting source, so.

It’s called the law of the unknown unknowns. This is articulated by Donald Rumsfeld, of all people, back in… I think it was in 2003 when he went into Iraq. And basically he was describing, I think to congress, about this situation in Iraq, and they articulated that there are known knowns, there are known unknowns, and there are unknown unknowns. And when he said that, he got ridiculed and pressed, they said that it was a stupid quote, they like laughed at him, and blew it all off as far as he’s blowing smoke. But if you think about it and if the way he articulated it, it’s actually a really really interesting and really really insightful. If you’re doing any sort of creative work or really just learning any new skill, if we break down the quote, you run in to three different things.

One of these things, you know, if we’re gonna use really specific examples, is the subjunctive test. If you’ve ever taken Spanish, you know that, like, okay, you start off learning past, present, all that stuff. And then usually overtime, you start learning conditional, and you start using that, and sometimes, all of a sudden, you get into this subjunctive test, which you have no idea about. It’s something that you’ve never ever ever ever had to deal with because you don’t learn English like that. You just learn how to say stuff in English and then you say it. But in Spanish, there are very specific tenses (in other languages as well), there’s very specific tenses, and use them in very specific ways, and when you’re starting out, you have no clue about it. But then as you progress, you only find out about that when you get to a certain stage in your Spanish learning. And all the way up til then, it’s an unknown unknown. It’s something you didn’t even know you didn’t know, but when you come up against it, sometimes it feels like “Crap, this is like the hardest thing in the world to learn.” Like, I remember learning subjunctive and just having no idea even how to approach it. And it was almost like through Spanish, I was slowly improving overtime, and then I got to subjunctive, and I hit this wall where it seemed like no matter what I could do, I was not getting through it, and it took me probably six months to like really wrap my head around subjunctive while I was living in the Dominican Republic. And it was one of those things that, early on, in my “Spanish career”, if you will, I felt really really really confident about my Spanish ability. And then I get all the way up to learning subjunctive tense, and I start realizing there’s a lot of things out here I don’t know about, this is just one of them, and I just ran into this and what else is out there that I don’t know? A lot of times this happens, I don’t want to just make it about language, but this happens in all sorts of places.

This was one of the reasons why, as you get better at something, or as you improve at something, you start feel like a little bit like you’re getting worse, or you’re not quite at the top because up to a certain measuring point, you can convince yourself “Oh, I know almost everything there is to know about this certain topic”. and then as you get, as you cross that threshold, you start realizing “Whoa. There is all this out there that I know nothing about. And if I’m going to learn all that, all of a sudden, it’s sort of like 80-20 return.” Like, you learned 80% of it by figuring out the 20% of what is actually out there. And then in order to get the rest, the 80%, it’s all exponentially harder, and you put exponentially more work to refine that process and to improve and to learn more.

There’s gonna be a visual on the site and I’m gonna link to another post about this that does a representation of this really well in a visual format, but this is one of those, well since that, it kind of is a little bit confusing cause there’s basically 2 words and we just rearranged them in different ways, you know, known known, known unknowns, unknown unknowns. At first, it can be a little bit slippery to grab on to, but once you figure– once you wrap your mind around it, and you start realizing that, when you start getting into projects and they stop seeming entirely easy, you know, like you get into a project and it stopped seeming “Okay, well, like I figured it out.” You get past that initial starting point of like “Okay, I think I have an idea of what I’m doing” and then you progress a little bit farther along and then you just start realizing “I really have no idea what I’m doing.” Once you get on into that, you start realizing that’s not a bad thing. That’s the starting point, right there. That’s the real starting point and when you get to that point, that’s kind of when the game has begin.

I guess the actionable takeaway here (let’s have actionable takeaways here) is that, one, that is completely normal and it’s actually just, it’s a result of you actually being better and smarter and wiser than you were before. You’re just having a better context for the overall base of knowledge that is out there and you a better context for, there are people out there that are that much better than me, or that are doing x, y, z, and you have a better understanding of the context and that is what’s making you feel like the gap between the pinnacle and where you currently are at, is bigger than ever, versus before when you’re kind of almost blissfully ignorant of “Oh yeah, sure, I’ve learned 500 vocabulary words, I know everything there is to know about Spanish.” (which at one point, that’s what I thought). <laughs> So one, that’s normal, two you’re gonna see returns on your inputs drop a little bit just because you’re going to see that as you, you know, like we said before about the law of diminishing returns, you’re gonna see that as you- instead of exponential jumps in learning or improvement like you see at the beginning- you’re going to see more refinements, you’re gonna see subtler improvements, you’re gonna see just more and more incremental changes over time. That’s not a bad thing, it’s just, you need to realize that it’s gonna take some patience, which is not necessarily a strong suit. And the third thing is just, like, I think this needs just be my motto or my non-official motto that you just tattoo somewhere, but just… Success over the long term is not necessarily due to talent or ability or anything special about a person. It comes down to a continual execution over time, and so if there is anything else out there, all i can say is just ‘keep going, put your head down like you did when you started, and you saw those massive improvements, keep doing the same thing, keep improving, trust the work, and keep getting after it.

So that’s the show, everybody. Hopefully this helped sort of verbalize something that I think a lot of entrepreneurs run across, a lot of people, anyone really trying to pick up a new skill runs across at some point in time and that is not just you, but, it’s just that you’re suddenly becoming aware of the enormity of the knowledge base that is out there and getting context for your current position. It’s not that you’re getting worse, it’s just you’re becoming more aware exactly where you are in relation to everything that is out there. So helpfully that helped. If you guys enjoyed the podcast, as always, leave a review on iTunes or Stitcher and i will love you forever. And yeah, until next time, I will see you guys on the next show.

Hey everybody, thanks for listening to the Impossible FM podcast. For more tips, blog posts, podcasts, videos, and a whole lot more, check out impossiblehq.com. Until next time, I will see you guys next Monday morning, right here behind the mic, at 8:00 AM eastern standard time. Until then, get out there, go do something that pushes your limits, and do something impossible.