You are here: Home / Fitness / Are You Trying To Be Funny Instead of Good?

I’ve written and re-written this a couple times, but this post made me finish this out.

The world wants you to be average.

There’s been a subtle shift – the world won’t say “average” but the world of instagram manages to perpetuate a message of “be aspirational in exactly the same way everybody else is.” And if you can’t do that – try to be funny.

But it’s hard to do hard stuff. And talk is cheap.

So, what you end up with is a bunch of people afraid to do hard work turning into third rate comedians. A hive mind treading in a lukewarm pool of mediocrity and pretending it’s a joke.

Jack Dorsey – CEO of two billion dollar companies – Twitter + Square – has been making the podcast rounds lately and talking about some of his “weird” habits.

And – to be honest – they’re not that weird.

5am wake up. Intermittent fasting. Meditation. Cold Baths. (Jack – you seem like you belong around here).

However – this is patently insane to the most media companies. Here’s a sample of the headlines that came out – with the media in full on bug-out mode. 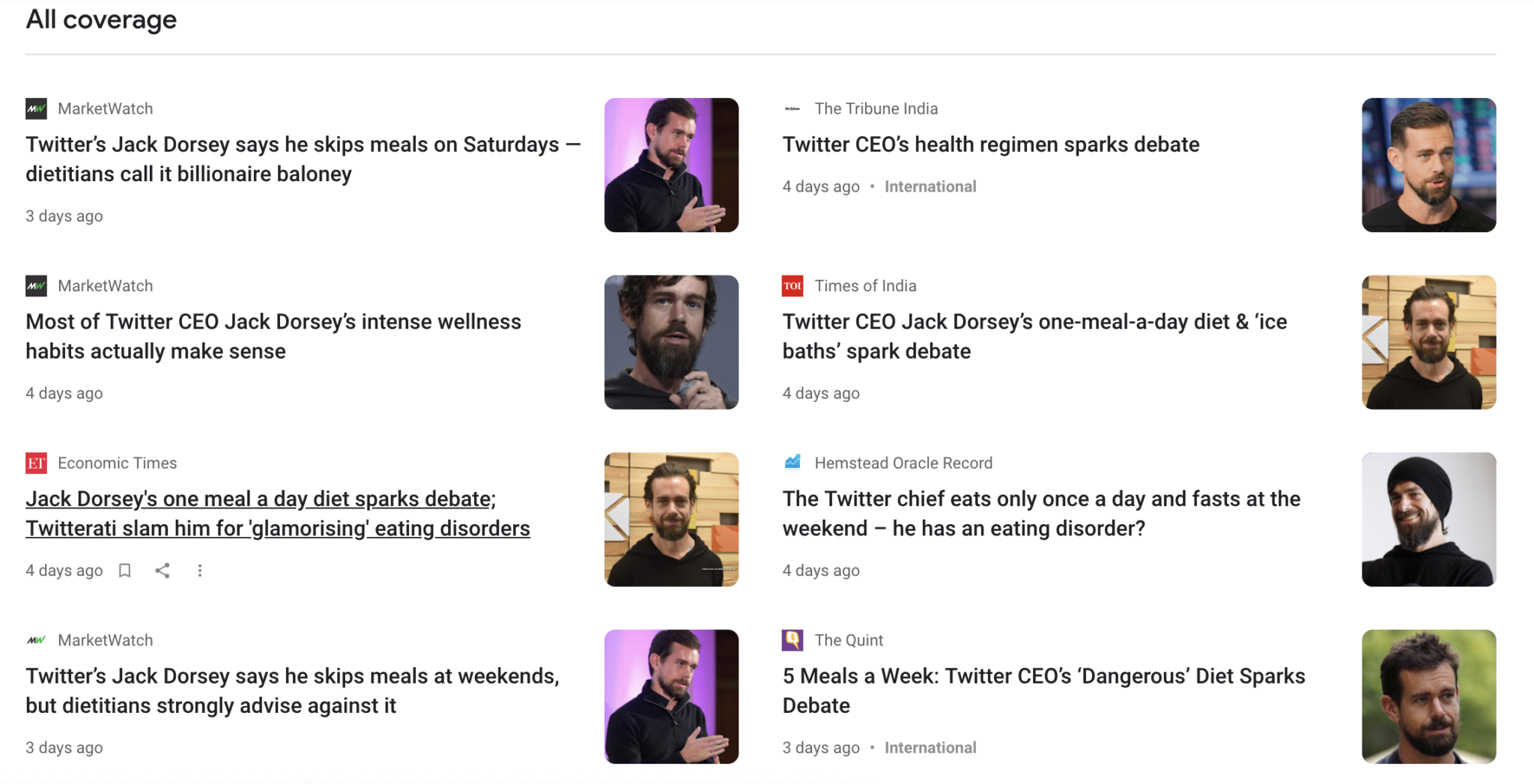 True to form – opinion piece authors writing for free followed suit – selling themselves out in the process.

I don’t want to pick on anyone, but this piece came across my feed along with this choice quote.

“Brutal regime”. “Starving themselves”. “Dangerous.” “Only if I was on fire.”

My first reaction was “I don’t get it” – why are people celebrating being soft?

I mean, I do get it – the author is trying to be funny. But there are a couple tragedies here. First, it’s not that good of a joke – if you’re going to sell yourself out – at least make the joke worth it. Second, and more importantly, what’s not funny is that whether he realizes it or not – that attitude is bleeding over into other parts of his life.

As Bruce Lee would say:

Seriously, if you always put limits on what you can do, physical or anything else, it’ll spread over into the rest of your life. It’ll spread into your work, into your morality, into your entire being. There are no limits. There are plateaus, but you must not stay there, you must go beyond them. If it kills you, it kills you.

During the Q&A, an interesting question topic came up:

Is it cool to win anymore?

Without hesitation – he answered:

Winners are automatically thought of as having done something unfair.

You can make up your reasons. They’re mean. They don’t deserve it. They’re bad people. Whatever.

But he’s not wrong.

There seems to be a trend lately where all winners are lumped together and must be graded by the behavior of the worst of them. And a few them might actually suck – they cheated, had an advantage, whatever – but maybe the rest of them worked their tails off and made something valuable.

The flip side of this mindset is that everyone seems to think that they’re losing. Wrap your mind around that – people living in the richest country in the world at the best time in history – somehow think they’re losing – that someone else is doing better than them or taking advantage of something they don’t have access to.

But instead of doing anything about it (like looking at the fact that at least 2 billion people have it objectively worse) they turn their situation into a joke.

Because, if everyone thinks they’re a loser – and the deck is stacked against you – then you can at least make a joke about the guy who’s winning.

I don’t know the author of the piece above, but he obviously cares about how many people are following him on LinkedIn. Maybe he thinks dismissing discipline to wake up early or take an ice bath will get him more followers.

There’s the popular “Man in the Arena” quote – “it’s not the critic who counts” – but it’s not even the critics anymore. They’re easy to block out (literally just block or mute them – it’s easy).

Instead, it’s the subtle pressure to perform even if you’re failing – even when you’re screwing up – and instead of worrying about the critics that probably aren’t paying attention to you anyways – you turn into a jester at your own expense.

The self-deprecation – even well intentioned – leads to lowering the bar – missing the standard – and covering up by making a bad joke about it. Quitting early or opting-out entirely at something you might fail at so you can at least get a joke out of it.

It’s fine to laugh about a mistake – but laughing about your failure – or even worse your “inability” to do something. Really?

You might not want to – but you can’t? You’d need to be on fire?

You just closed yourself all to a whole bunch of difficult, worthwhile things, and sold yourself short for some cheap laughs.

And – you just made it easier for the field of people willing to do slightly-harder-than-average-things.

It’s like the kid in grade school who thought it was cool to act stupid. Maybe his peers thought the jokes were funny, but any adult looking in would say either

I don’t know which of those options is the saddest one.

But just like that kid – being a jester at your own expense isn’t that cool.

And when that happens – you can let yourself off the hook, and make a joke about it. Make it so you don’t have to admit that you didn’t do your best, you didn’t meet your standard and that you failed. You never really “failed” because you didn’t give try your best, right?

Or you can take a hard look in the mirror, figure out what went wrong and how you can get better.

It’s not the critic who counts.

But your internal jester doesn’t either.

It’s less a question of you vs. the critics. You vs. yourself is the real battle.

But getting pummeled and then pretending like you’re not trying isn’t cool. Neither is standing on the sideline and saying “I could do that, but only if on fire.”

From an objective point of view it’s embarrassing.

And like the kid at school, it’s a little sad.

You can do better – and you’re not. Instead you’re selling out you and your potential for a cheap joke.

So the next time you’re challenged –

Instead of making cheap laughs out of a challenge.

Or are you content treading the water of mediocrity and pretending it’s a good joke?

I have 317,000+ Followers on LinkedIn and you can FOLLOW ME via this link