You are here: Home / Adventures / How To Run An Obstacle Race

I’ve done quite a few obstacle races at this point in time (including a GORUCK Challenge, which is a whole other monstrosity of a challenge).

They’re one of the best ways to break into running, or fitness in general, if you need a good way to get out of the house and have fun with some friends and you’re not quite ready for a marathon (or ultra) yet. 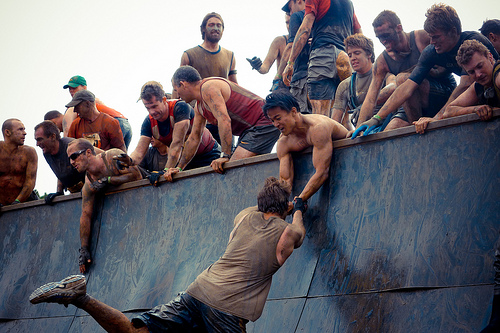 However, a couple weeks ago I ran my first Tough Mudder.

It’s billed as “probably the toughest event on the planet”, so, naturally, I had to try it.

I showed up at the race parking area, which I assumed was next door to the race. Not the case. Apparently the race was held in another town, 40 minutes away!

I thought I had given myself plenty of time by showing up 20 minutes prior to my wave start, but now I was going to be leaving the parking lot right about the same time as my wave would be setting off from the starting line. As a result, I showed up to the race about 30 minutes after the last wave had left.

I was 95% certain that I wasn’t going to be allowed to run, but I decided I had invested enough time getting there (a 1 hour drive and a 40 minute bus ride) that I might as well try, and see who might stop me.

As it turned out, I got my race bib anyways and was told to “take my chance” at the start line.

I hurdled a wall to get into the start area and tried to sprint past the starters before they could catch me. They were pretty cool about it, but yelled that I had a “a while” to catch up with the last group. I later found out that “a while” meant 20-40 minutes. Awesome.

Well, nowhere to go but up.

“Not finishing last” became my rally cry as I ran by myself for the first couple of miles, hoping to catch a glimpse of the people in front of me.

If you’re thinking about running a Tough Mudder, or another obstacle race, in order to knock it off your impossible list, here’s a little bit about what happened during my race, and a few tips that might help you.

How To Run An Obstacle Race

I’ve done about a half-dozen mud races at this point. I’ve had DOZENS of people tell me they were either

It never ceases to amaze me how many people have no problem SAYING what they want to do, but when it comes to actually doing it, they don’t follow through.

If you want to run an obstacle race, you can’t just say it. Heck, you can’t even just pay the money and pick up the t-shirt.

I wasn’t even 100% sure that I was going to be able to run the race, but I showed up and tried anyways. No one stopped me.

If you stand and hesitate, you’re screwed. Over the course of the race, my motto became momentum.

The same goes for the fire walks, the ice baths, the mud pits you have to hurdle and the plank you have to jump.

If you try to inch your way in, it sucks and you’ll probably fail.

If you go for it, it might still suck, but you actually have a small shot at succeeding.

The obstacle is your friend. Don’t be afraid of it.

(This has way more to do with life than you want to admit.)

The week prior, I had bruised the entire left side of my leg after crashing my bike during a 100 miler, so climbing up some of the obstacles hurt.

There were a few obstacles which electrically shocked you (and it’s not just a baby shock either).

There’s pain in the obstacle races. If you don’t want to experience some sort of discomfort, stop reading and start watching Honey Boo Boo or the Maury show to feel better about your life.

If you want to stretch yourself though, there will be pain.

Lean into it. Expect it. Welcome it.

It’s going to hurt either way. You don’t have to make yourself suffer though. It won’t hurt as bad as you think it will, I promise.

I saw a lot of people walking in between obstacles. Obviously, you don’t have to sprint the entire thing and not everyone is prepared for it, but some of the obstacles had a mile or more in between them.

That’s not to say that you have to do wind sprints or race the other competitors, but even jogging can get you closer to where you want to go much, much faster.

Sometimes, if you start late (like me), there will be no one around. Instead of whining to yourself, make a game of how many people you can catch and who you can meet along the way.

Hint: You won’t catch too many people by walking, so get running!

Forget About Being Ready

I almost didn’t run the race because I had almost convinced myself I wasn’t “ready”. I hadn’t done any training for it and I was a week off of a century ride.

Not being “ready” is a terrible reason not to do something.

At the end of Tough Mudder, there’s an obstacle called Electroshock Therapy.

Because I started so late, I almost never ran into lines at the obstacles (this could almost count as a “not-so-pro-tip”). I only ever had to wait for a maximum of one or two people.  However, at this obstacle, there was a line at least 20-25 deep.

And for good reason.

Electroshock Therapy is a space of about 30 yards filled with live wires waiting to shock you and get your face down in the mud, conveniently close to the finish lines so that spectators can gape in awe at your flailing body.

The line was getting deep and no one was going. The more people that waited, the more people became hesitant and the bigger the line grew.

At one point, the finish line announcer just yelled, “I need a runner!” I was ticked (I’d had already had my face put in the mud before, so I knew these things didn’t just tickle), but I wasn’t going to back out at that point, so I ran around around the growing line & hurdled the first hay barrier and began to leap over the second when I found myself in the mud, too shocked (literally) to understand what had happened.

I jumped back up and lunged over the third hay bale, got zapped on the way up, and landed on my hands and knees outside of the Electroshock Therapy area.

It wasn’t pretty, but I was done. I could have sat back and analyzed various routes to plan out which one would have the lowest chance of making me look like an idiot, but, eventually, one way or another, I was going to get shocked.

Putting it off just means you have to choose from the leftover finish line beer.

Do it anyways. It’s always worth it.

(And yes, this has as much to do with life as it does an obstacle course).

Now go out and sign up for an obstacle race.

Honestly, not that tough. In the Midwest, we suffer from “everything-is-flat-itis”, so the course was a lot of out-and-backs through some fields with a bunch of obstacles put together. The toughest obstacles were the electric shock ones, but those honestly seemed to be trying too hard to be “tough” when everything else wasn’t really that crazy. Just my opinion :).

*Random business idea for fledging photographers: I don’t have any good non-proof photos since Tough Mudder charges a hilarious $75 for approximately 5 photos (give or take). Find a upcoming mud run race – charge a flat $20 on top of the entrance fee (at registration) for all inclusive, digital-only photos of you taken during the race, and slowly reshape race photography. It’s hilariously expensive (and honestly relatively poor photos for what you pay).