“…So feel free to bring your guns, liquor or anything else you want.”

We were flying a private Ilyushin jet out of Punta Arenas in about an hour. Richard, the race director, had just finished briefing us on how to clear security while still bringing whatever we wanted to Antarctica…

We pulled up to the airport, got out and went through security, just like any other flight.

We went up to the gate, showed them our awesome new boarding passes and went down to the tarmac, where, curiously enough, the buses we had just gotten off had pulled around, complete with anything we had in our bags – completely unchecked.

So this is a thing that happened. . Picked up my boarding pass today. Starting to get real over here. #icemarathon100k #777project

The inside was the stripped interior of a cargo plane with exposed wires everywhere and seats bolted to the floor. While it seemed crude, our Russian crew assured us everything would be fine. 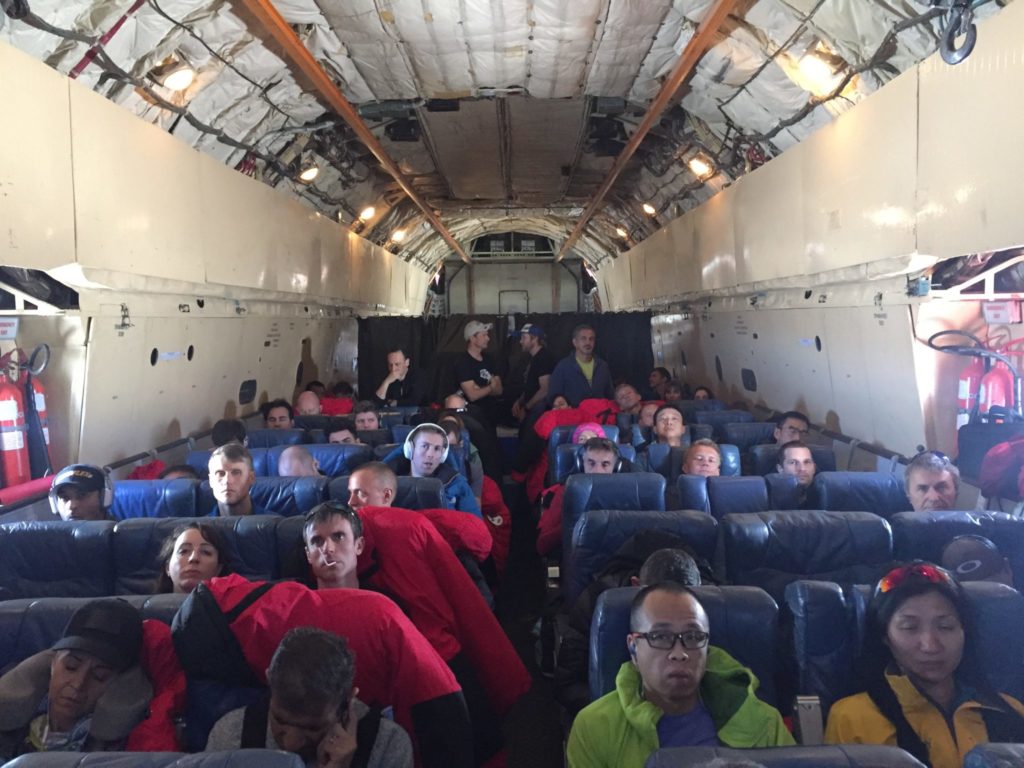 While it wasn’t first class (and I’m pretty sure I didn’t get any miles for this stretch), they did give us a snack and put on an in-flight movie (Pretty Woman, interestingly enough). 4 hours later, we were landing.

I’ve been planning on running this race for almost 3 1/2 years. With the ankle and the legal things that had popped up over the years, it didn’t seem like it would ever really happen.

So when we were landing and stepping off the plane, I just kept reminding myself:

Meet the Ilyushin-76TD. The most bad ass Russian plane on the planet (probably) and our ticket to Union Glacier, Antarctica. . Essentially an old Soviet cargo plane fitted with about 60 seats. On the inside, no frills, no windows, and the smallest bathroom you've ever been in. However, the Russian crew was incredibly nice, served us juice boxes and a sandwich, and even out on an in-flight movie for us – Pretty Woman. #icantmakethisup . We landed it on a blue ice runway where the winds naturally clear the ice and while the ride didn't have many frills, the landing was smoother than 90% of commercial flights I've been on. . #antarctica #ilyushin #airplanes #militaryplanes #unionglacier #puntaarenas #icemarathon100k #adventure #travel #instatravel #badass #marathons #running #motivation #inspiration #discipline

As we stepped into camp, the doctor “Doc Martin” (his real name), gave us the tour. 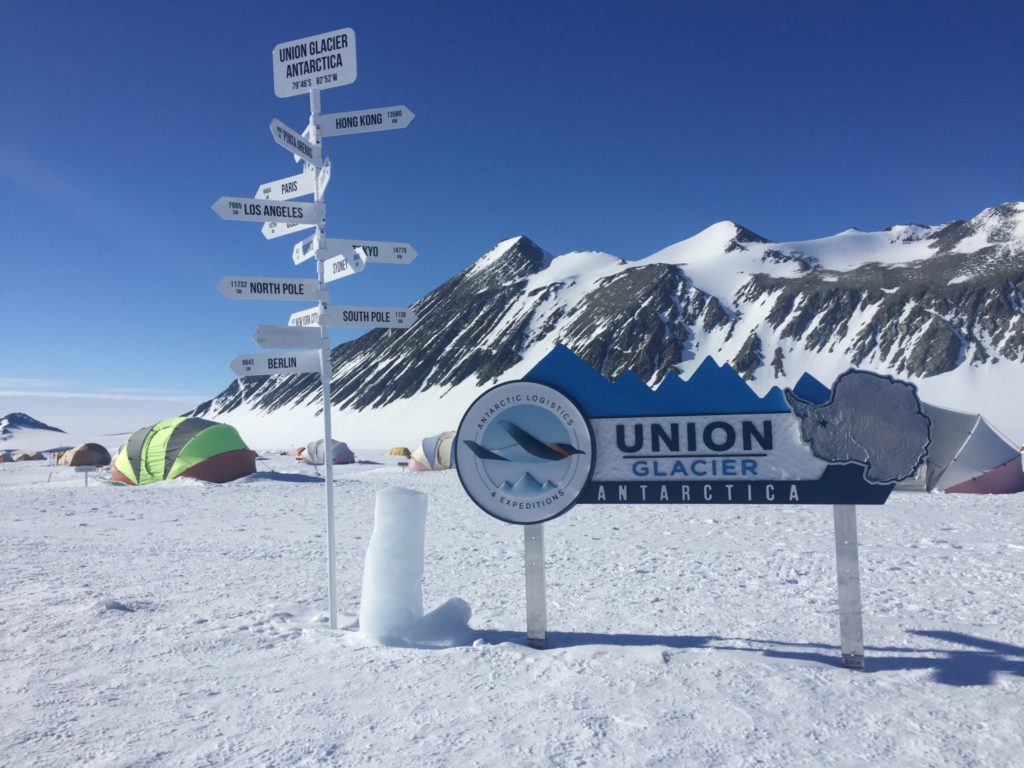 “There’s the mess hall, there’s the tents where you’ll sleep, and there’s the bathrooms. Marathoners, you can find your tent and relax. Those of you running the 100k, you’re going to want to get ready – you’ll be going out soon.”

We were supposed to get a full night’s sleep and go out in the morning on Saturday, but apparently in Antarctica, when the weather’s good, you go.

I ran to my tent, unpacked and set up my sleeping bag. I had 4 hours before the race would go off, and after waking up at 4am that day, I knew I’d be running a sleep deficit right when the race would be getting tough.

I managed to pull off a quick 2 hour nap before waking up, getting ready and heading to the start line.

I was so rushed, I didn’t even have time to get pre-race nerves! 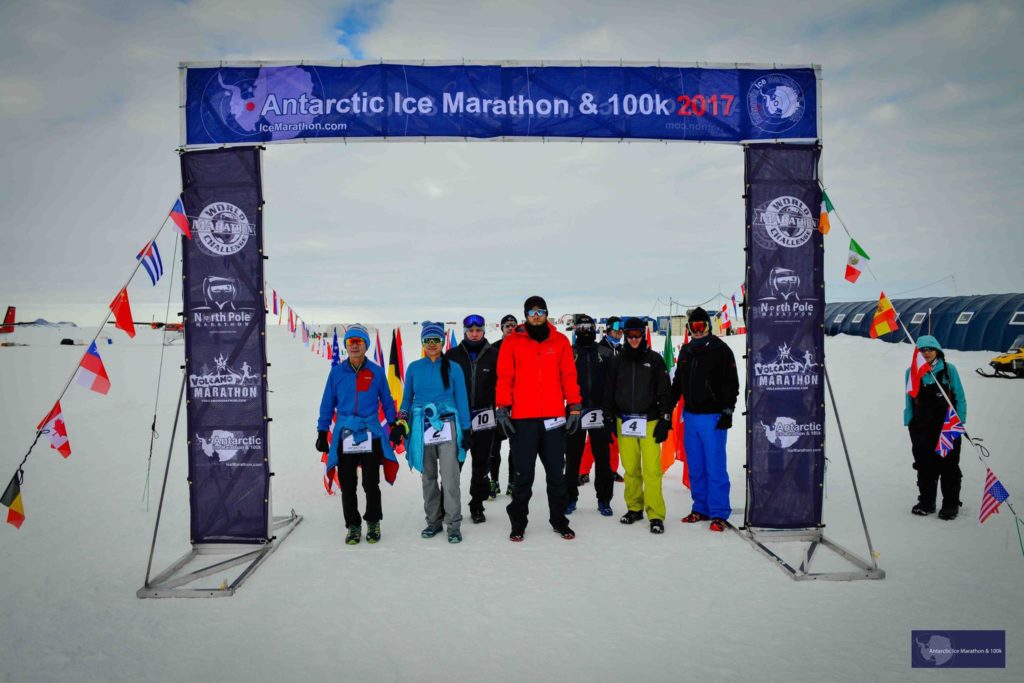 We got to the start line just outside the mess hall and lined up to take a few photos. No fancy countdowns, just a 3…2…1…GO!

Boom. We were off.

I went off at a 9 minute mile effort. I wanted to bag some time early and stay ahead of the game – especially when it came to later on.

I felt like I was pushing well at 9 minutes and I looked down at my watch after a bit and realized the real time was closer to 11/mile. The snow would help to ease the impact on my joints, but it was slowing me down quite a bit.

The course was a 10k loop. 10 times. At the halfway point in the loop, there was an un-manned tent with some food and drinks inside, as well as a blanket and a sleeping bag in case you got too cold halfway through the route.

I went out and felt good. There were 10 of us running, and through the first 3 or 4 laps, I was in third place (pretty cool).

After I finished the first lap in about an hour, someone said, “Great job! Only 90k to go!”

I realized then how long I’d be out there.

The first few laps were interesting as everything was new and you got to “explore” the different parts of the course. You could take in the scenery and didn’t really know what was next. You just got to look at the glaciers, the mountains and the sky. 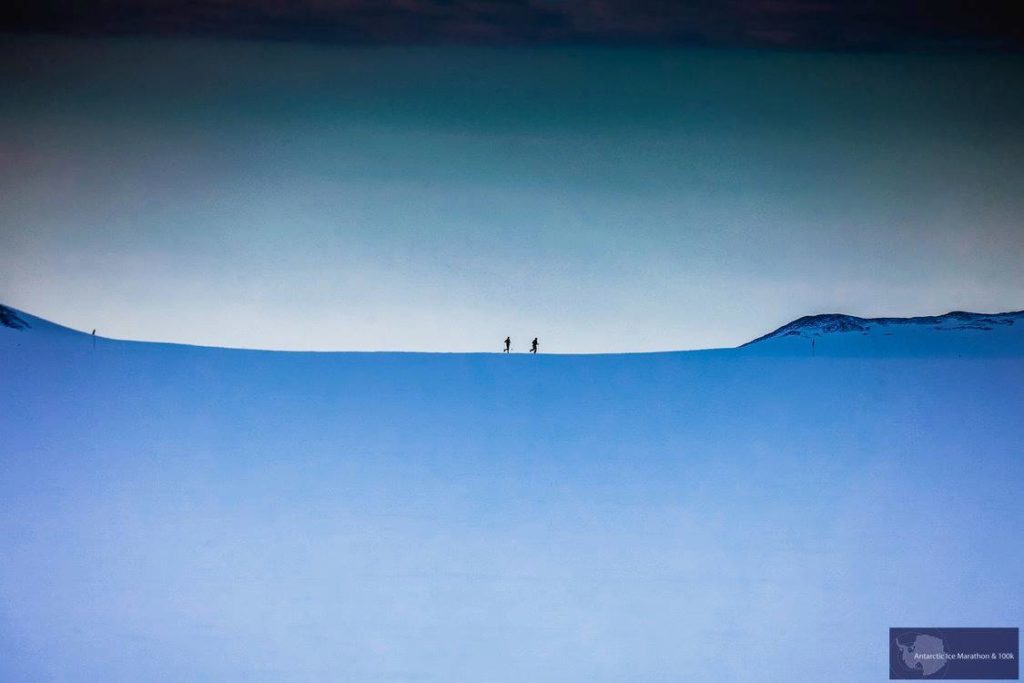 Pretty much the only colors you’d see the whole time.

I planned on taking the first 50k-60k easy and then seeing where I was at before taking any major breaks or re-evaluating my race-strategy.

And they went well. After 50k, there was some relief that “hey, we’re halfway done.” 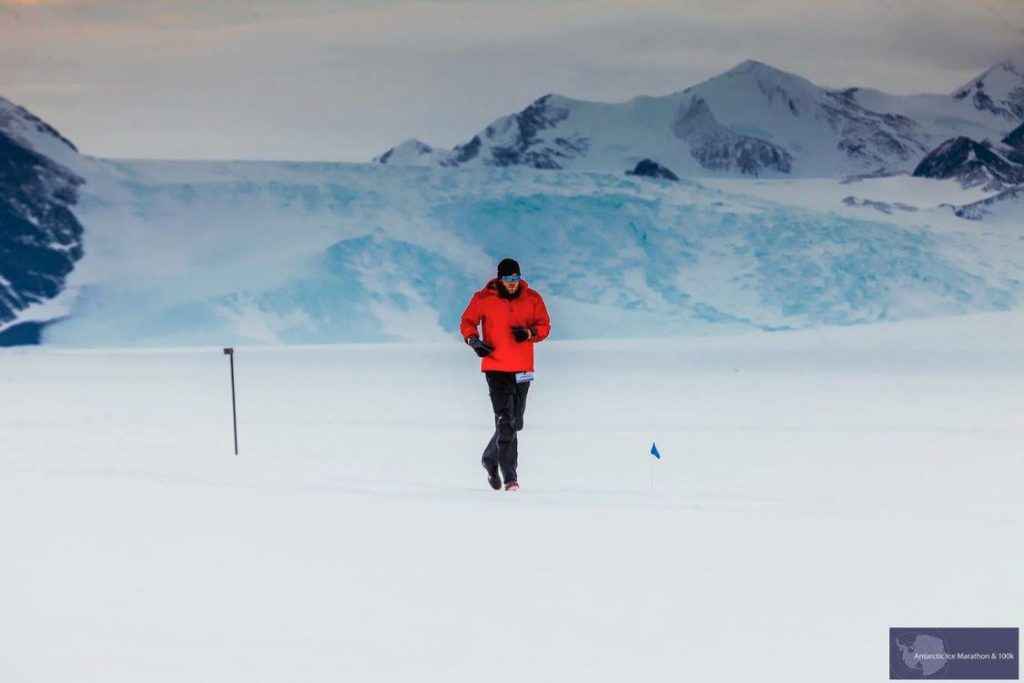 Every time I came back to the main base, there was someone who would take my glasses, wipe off the ice that had collected and hand them back as I kept trying to move forward.

After 60k, I realized I had soaked through my mid-layer. It was hours of sweat layered on each other.

They had a saying in Union Glacier – if you get wet, you die.

I took that to heart and realized when I was wet that I needed to change.

When I came around finishing lap #6, I took a few minutes to swap out that mid-layer with another mid-layer and put up the wet one near a heater to dry out for the next couple laps.

After about 70k, I took a break. I hopped in the tent and some people had been waking up. Apparently, it was the next morning!

I talked to some of the other camp residents and they asked me how it was going. I asked them if they had been out there on the loop.

He said, “Yeah, I ran a loop yesterday”

I laughed to myself:

I didn’t get a YESTERDAY! It’s still today for me!

Anyways, breakfast was coming so I sat down and had a pancake breakfast. Eggs, bacon and pancakes.

This might be the first time that I’ve eaten an entire meal in the middle of an ultra. But it helped.

I felt like a million bucks afterward. No stitches, no cramps, nothing. After 8+ hours of gels and candies, real food tastes amazing. 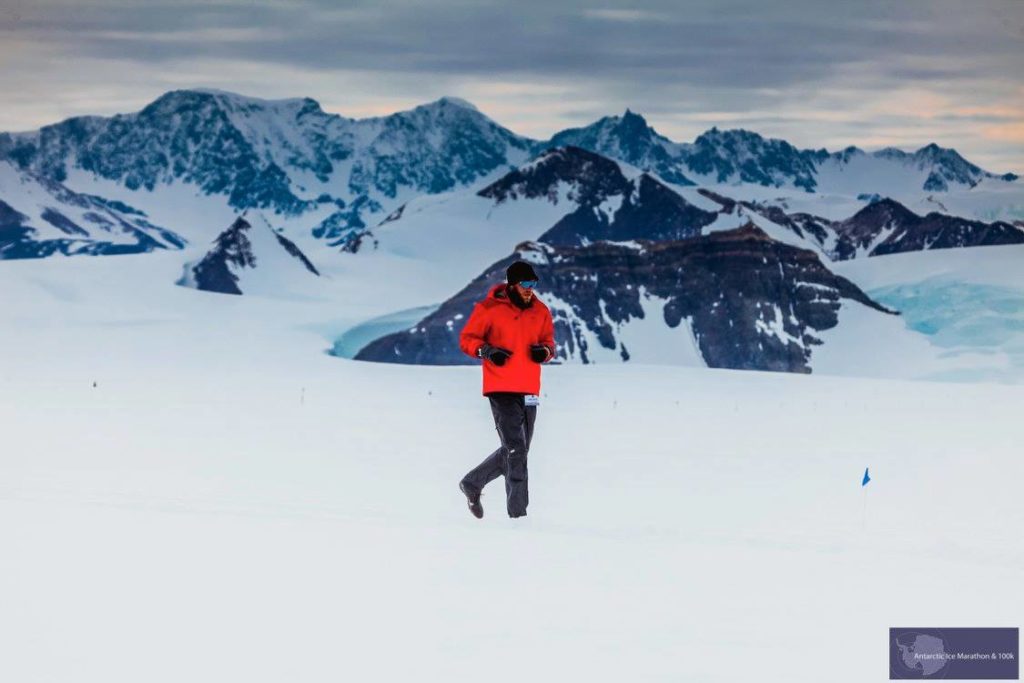 Even though I felt good, the next 20k weren’t pretty. I was pretty much the captain of the struggle bus until I got to 90k.

It was just a long way out, and mentally, those 20k were the toughest section. You’ve already run a 60k race and you basically still have a marathon left. My legs and knees were mostly fine, but my hip flexors were aching and the pain moved over my hips and into my lower back and spiked every time you took a new step.

That said, I hunkered down and kept going. After 90k, I swapped back into my mid-layer that had dried out (and was much warmer) and headed out for the last 10k.

Knowing there was only 10k left was great, and I moved a lot faster than previous laps, but it was still much slower than my standard 10k time. Safe to say, it wasn’t pretty.

When I came around the last corner – the section of the course I nicknamed “purgatory” because even though you could see camp, it was still 1 1/2 miles away. Even though this was the most discouraging section of the loop, I kicked it up and enjoyed the last little bit in. I don’t think I’ve ever been so happy to finish a race, but I stopped and took a bunch of photos when it was all over.

I finished in 5th place out of 10. In the last 10k, I gained 30 minutes on the guy in 4th on the last loop alone and if I would have been able to see him (or even had another 10k to go), I think I would have easily caught him.

The course was interesting in general because it was really difficult to see much out on the course (depth perception is way off and it’s hard to tell if the mountains are 2 miles or 20 away from you) and because the race was so long with so few competitors that you didn’t run into anyone at all. In fact, for the last 20k, I barely saw anyone outside of the camp-side of the loop. 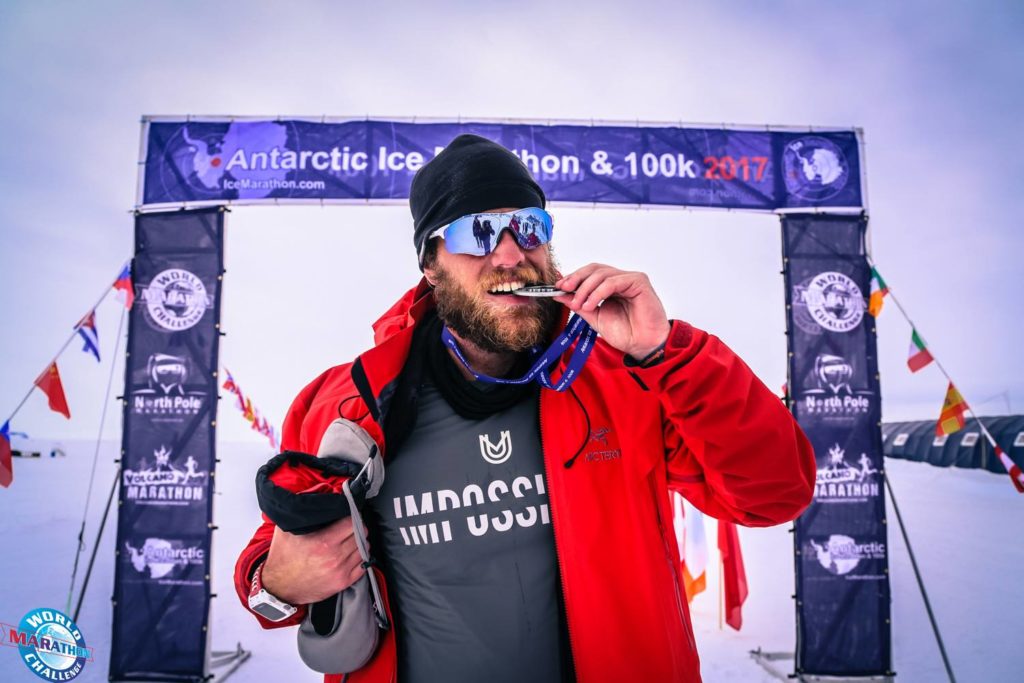 The loop structure on ultras is relatively new to me, and I realized that I tend to take a lot more breaks during them because you’re “coming back to base” rather than going point-to-point like you normally do.

My mantra is usually “don’t stop” with point-to-points, but with a loop (especially in these conditions), it’s tougher not to stop, and in some cases (changing clothes), you couldn’t help it.

It wasn’t until post-race when I realized how much time some of those stops had cost me. I kept pace with most. The two people that did pass me, passed me while I was eating pancakes 🙂 With better break management, I think I would have been pushing for spot 2 or 3. Still not at a super fast clip, but I seem to learn something new every race.

Overall though, I was happy with the race. It was definitely the farthest that I’ve ever gone which is a new milestone for me and in a spot that I’ve been trying to go for years – which was amazing to finally experience.

Antarctica is like no where else. As soon as I landed, I wanted to go back immediately. There’s a ton of incredible adventures and expeditions to do down there, and while they’re expensive, they’re like nothing else in the world. Interestingly enough, this is the last year they’re running the 100k, and so while no one is probably doing that race again, I would love to go back and do some other epic adventure.

Back to the states for a few days before heading to Thailand for the next one.