You are here: Home / Adventures / If You’re Scared To Death, You’re Doing It Right

If you’re scared to death, you’re doing it right.

I was talking to a friend the other day. They’re in their senior year of college and enjoying things mostly. I asked them what they were going to do after college, and they really had no idea. After a few more minutes of prodding, my friend admitted,

I really don’t know, but I’m scared to death.

Good! I told them. If you’re scared to death, you’re doing it right.

I think everyone starts out scared. Scared they’re doing it wrong, scared they’re going to make a mistake, scared they’re going to fail. Over time, we’re taught, that you should take the safe way, do things you’re qualified for. Be nice, stay comfortable and in return, you won’t have to scared. We gravitate towards comfort, and are lulled in by it’s but over time that comfort zone we’re lulled into turns into a sort of apathy. Every once in a while you need a good scare to get you jolted back on the right path (but that’s always much easier to say than do).

A month ago, I really scared myself for the first time in a long time.  I went skiing.

Every year a bunch of friends from college get together and catch up. This time we went skiing. I’m moderately coordinated, but I’m not a big cold-weather fan and usually do what I can to avoid it (like going to an island). I had been skiing before, but it was a while ago – as in at least 15 years. Since then, my only experience with skiing was avoiding the Yeti on SkiFree. But, since I hadn’t seen some of my friends in a while, I went against my better judgment and decided to give it a shot.

We jumped on a blue square and the first few runs I went down very slow. Angling side to side, mostly hoping that I wouldn’t run into anyone (I could handle wiping out, but I didn’t want to be that guy running old people and young children off the slopes). After a few runs, I still hadn’t managed to make it down in one run without wiping out.

My buddies were all much more advanced at “not dying” than me, and decided that the black diamond hill would be “fun” to go down. I didn’t even know what black diamond meant, other than that it sounded scary. Before I knew it, I was on the lift, heading to the top – knowing full well that I hadn’t yet made it down the beginner hill.

Once we got to the top, you could go down like 50 feet pretty simply before the main section fo the hill got steep. We went down the 50 feet or so and took a photo as a group (I’m in the yellow). 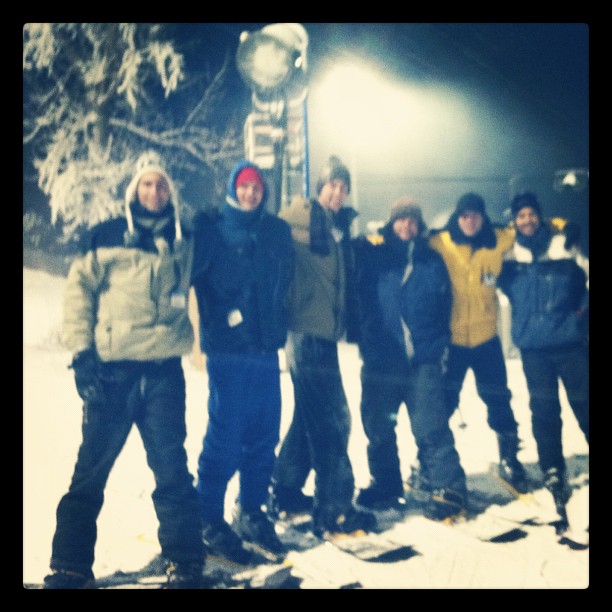 After we took the photo, they all went down one by one, as if it was no big deal. Still not having made it down the blue hill without wiping out, I watched everyone else zip down the hill, and felt my stomach creep up into my throat somewhere.

I still hadn’t made it down the other hill and now I was going to try to go down this one? Am I stupid? I am going to go down this hill, fall immediately and roll down the entire thing, most likely breaking multiple bones in my body.

After watching the last guy in our group head down, I turned around and was going to head towards the other, smaller hill. I was going to give up. I wasn’t ready. I was too scared. Not this hill. Not yet…I’d come back to it later…It was the smart thing to do.

So I turned around, and muttered some curse words to myself under my breath.

I’m either gonna make it down this hill or I’m going to make it to the hospital. Either way, I’m not going home without trying this thing.

So I tipped over the hill and started to go.

I picked up speed quick. According to the spedometer in my head I was going at least 60mph (I have no idea how fast I was actually going, but it felt like 60mph). It was all I could do to focus on one thing:

What am I doing?

All of a sudden, I came right into the path of a snow machine – partially blinding me.

I came out, regained my bearings just enough to realize that I was going faster than ever.

My feet bounced around but I somehow managed to stay on top of my skis.

I hit another snow machine.

I emerged from the second snow machine and could see my friends at the bottom of the hill yelling at me – but I was moving fast and still hadn’t figured out what “pizza” meant. Slowing down meant potentially biting it hard, so I focused on not falling down and zipped right by them.

I kept going another 100 yards after the hill leveled out and I slowed down enough to turn around and make my way back to them.

I made it. I took the hill and I didn’t die.

I really didn’t believe I made it. I was certain I was going to be in some sort of cast at the bottom fo the hill.

And as scared as I was, I was a little less scared afterwards. Sure, there was still fear, but fear mixed with a confidence that I knew I could do that hill again if I wanted to and that I could take on a bigger one if I wanted to. I’m still not a great skier, but I’m a lot better one than I was at the top of the hill.

How Scared Are You?

Like I told my friend, if you’re scared, you’re doing it right. It’s easy to say. It’s a lot harder to do.

There’s not a much better feeling than being terrified of something, doing it anyways and coming out on the other side better and stronger and more confident than you were before.

So if you’re scared to death – congratulations. You’re doing something right.

What are you doing that scares you?

Holy Ski Patrol Batman! Do I need to clarify this? This is not an endorsement of skiing off cliffs if you’ve never seen snow before. It’s a story and an example of a lesson I learned by doing something scary. I’m not a skiing expert – that’s sort of the point of the story. Take everything you read with a grain of salt and make decisions for yourself, including stories from a certain blogger you might read.