Dang straight. Here’s how it happened.

I finished my challenge in June and did a photo shoot to celebrate. Throughout the program, my friends and family started to notice my actions and transformation and their reactions changed over time accordingly.

When I started this whole thing, they were asking:

What are you doing again?

As I kept doing it and they saw the behavior changes and sacrifices I would make, they started to ask

Why are you doing that again?

When they started to see my body change and actually see the results I was getting, they began to ask:

How did you do that again?

After the photo shoot, I got a lot of questions from a lot of people wanting to know exactly what trickery I did to pull it off (spoiler alert: there’s zero tricker involved). About 50% of the people actually took what I said and did exactly nothing with it. The other 50% took what I said and decided to implement it and do something about it.

One of the people that decided to do something about it was Justin, my little brother. I should just refer refer to him as my younger brother, considering he’s about an inch taller than me and has about 20 pounds on me (which doesn’t matter too much since I can still beat him up 🙂 ).

Over the past few months, Justin had thrown himself into his work, running his own business. He was working 6-7 day weeks, with multiple back-to-back 12+ hour days. Work was booming, but he ended up coming home exhausted and tired and letting his fitness routines fall away. He was getting soft.

He wanted to change things. Having seen my transformation first hand, he wanted in.

It worked out well. As I said, Justin had been feeling out of shape and lazy and wanted someone to kick his butt and I needed a  beta tester to test out my program before releasing it to the public. Also, as a bonus, I’m always looking for a good reason to kick his butt :).

So I laid it out for him.

80% of the work would be changing his diet. 20% would be his workouts. He agreed and decided to do it.

Here’s Justin when we started out. 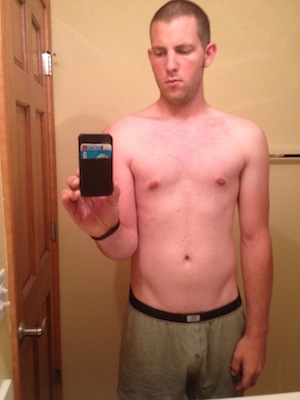 6’3″ and 198 pounds. Not overweight by most American standards, but definitely not in the kind of shape he wanted to be in. The definition of skinny/fat. Soft, heavy and weak (sorry man, you know it’s true). He was ready to change.

I told him, it’s not going to be easy, but it’s going to be worth it. He jumped right in and was determined to get it done.

No excuses. No whining. Just action.

So he went to work. Day after day after day after day for the next 2 1/2 months, he got after it. Not missing a day of his workouts, despite being on a 5 1/2 week road trip, having a 2 week stopover in Portland for WDS, and having some unhealthy food and less rigid dieting. Overall, he stuck to the basics of the plan and kept at it. As a result, over the 2 1/2 months that he was following the plan, Justin went from 199 pounds to 169 pounds. Yup, he lost 30 pounds, all while somehow managing to come out looking bigger, stronger and leaner than before. Beast! 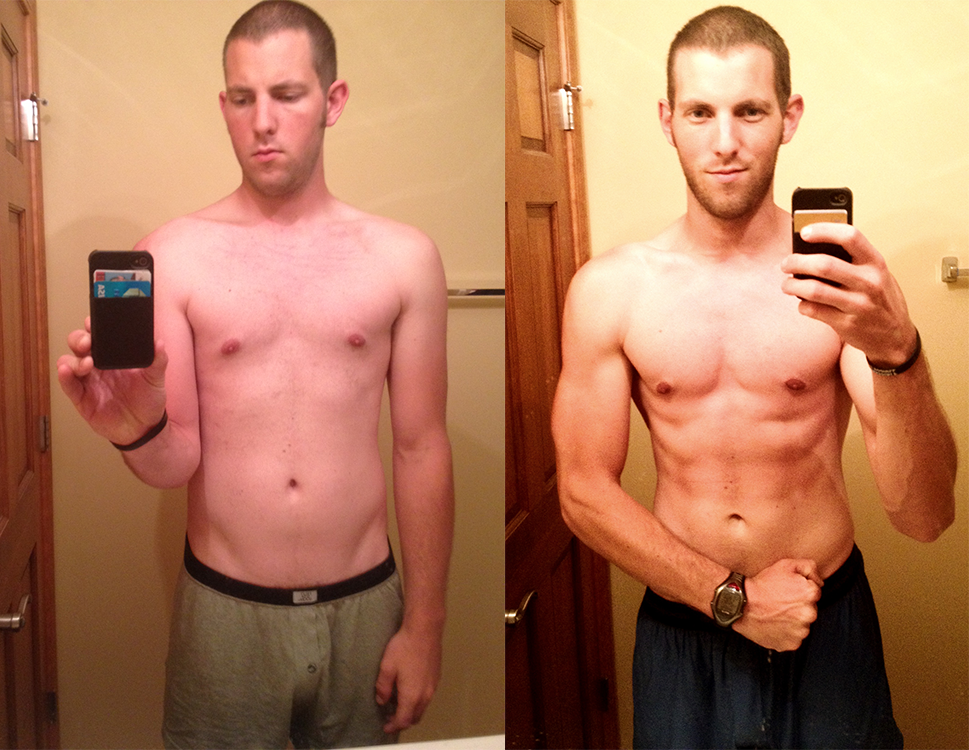 Seriously, he weighs 30 pounds less in the photo on the right than he does on the left. Sorcery? No. A lot of hard work? Yes.

Why Was Justin Successful?

There were a few very specific reasons Justin was successful.

If there’s one thing Justin’s good at it’s listening (seriously, he’s an audio engineer – it’s his job). But Justin does more than just listen, he actually does what you tell him to do. Once I laid out the plan and showed him how to do things properly, he just did it. No complaining. No whining. Just doing. He had a plan and he stuck to it.

The best secret to fat loss and six pack abs, is simple consistency. Day after day after day.

I don’t think Justin kept a journal throughout the program, but I did get an email or a text every week or two with a progress update or another shirtless photo (I have way too many shirtless photos of him in my inbox now and no you can’t have them). He consistently tracked his progress and when he saw his weight dropping, his strength improving and his shirtless photos looking better and better, that was motivation enough for him to keep going.

At one point I mentioned to him, “Man, you’ve gone kind of nuts on this haven’t you? I mean you’re going all out!”

He responded, “It’s easy to get excited about something when you see results. It just keeps you going.”

There were days when Justin wanted to cheat or give up on a work out, but I got the privilege to kick his butt and push him when he didn’t want to be pushed. Justin’s not the most competitive person in our family, but there’s nothing quite like having your older brother (me) challenging you, to make you want get out there and do your workout, regardless of whether or not you “feel” like it.

While I would never say that Justin actually had a better transformation than me (what sort of older brother would I be if I did that?), but I will say it’s pretty freaking impressive.

Have you picked up your copy of Impossible Abs yet? What are you waiting for? Vic and I will be having a special webinar for anyone who buys (or has bought) the program before midnight tonight. No holds barred, any question you want. Impossible Abs.