You are here: Home / Adventures / Impossible Ones: A Brand New Impossible Thing (or Two) And How You Can Help

In case you haven’t noticed, we’ve got a lot of things in the works around Impossible HQ and the blog lately. We’re releasing a fitness program in a few weeks, and over the weekend we  murdered our servers from last week’s post (thanks to Jeff for un-murdering them), but that’s not all. Today we’re announcing 2 new impossible things: you ready? This is going to be fun.

A key thread throughout everything we do here an HQ is focused on giving and service. There’s a couple reasons for this, but the main one is that at some point through your own journey, you come to the realization that you’ve gotten a free lunch or two throughout life and you haven’t done it all on your own. Whether it’s being born in the right country, or having a family, teacher or boss that backed you up at a key moment- there was something at some point that set you off that wasn’t your doing.

Somewhere along the lines you had help.

And while, doing the impossible is tough – and you have to want it bad sometimes – if you pick your head up for a few seconds and look around every now and then, you start to realize how much you’ve been able to accomplish, how many abilities and opportunities you do have.

When you start to realize the abundance of these things, 2 things usually happen:

We spend a lot of time talking about creating more possibilities in our own lives, but over the next few months, we’re going to have a chance to create some possibility in the lives of others through a very unique opportunity.

A few months ago, an organization called Pencils of Promise called me up. As the blog has grown, I’ve gotten approached by a ton of businesses trying to do “deals.” A lot of of organizations, businesses, and entrepreneurs that want to do JVs/partnerships/affiliate deals that take advantage of the Impossible brand and I simply won’t do it. I’ve turned down 100% of those opportunities until PoP called.

I talked to Rachele and Erin and they explained to me that 67 million children in the world live without access to education. Something we all take for granted and complain that it’s mandatory for 16 years is something not even available to millions of kids around the globe. They don’t get the option to choose to push their limits, live an adventure, because for them, it’s impossible for them to get something as simple as an education. Pencils of Promise wants to change that.

Pencils of Promise started when their founder Adam was backpacking through India and asked a small child who was begging, “What do you want most in the world?”

“A Pencil”, the child answered.

So Adam reached into his bag, pulled out a pencil and gave the child one. He traveled and handed out more pencils, but that answer  stuck in the back of his mind. So he decided to do something more about it. Starting with $25 in 2008, and focused on giving my students the possibility of education, PoP has gone on to build over 50 schools in Laos, Nicaragua and Guatemala in conjunction with local communities by hiring local staff and required participation from the communities as they track each student’s success.

Once we checked out their history and read their 9 key founding principles, I thought to myself, “Wow, these guys “get” it.” 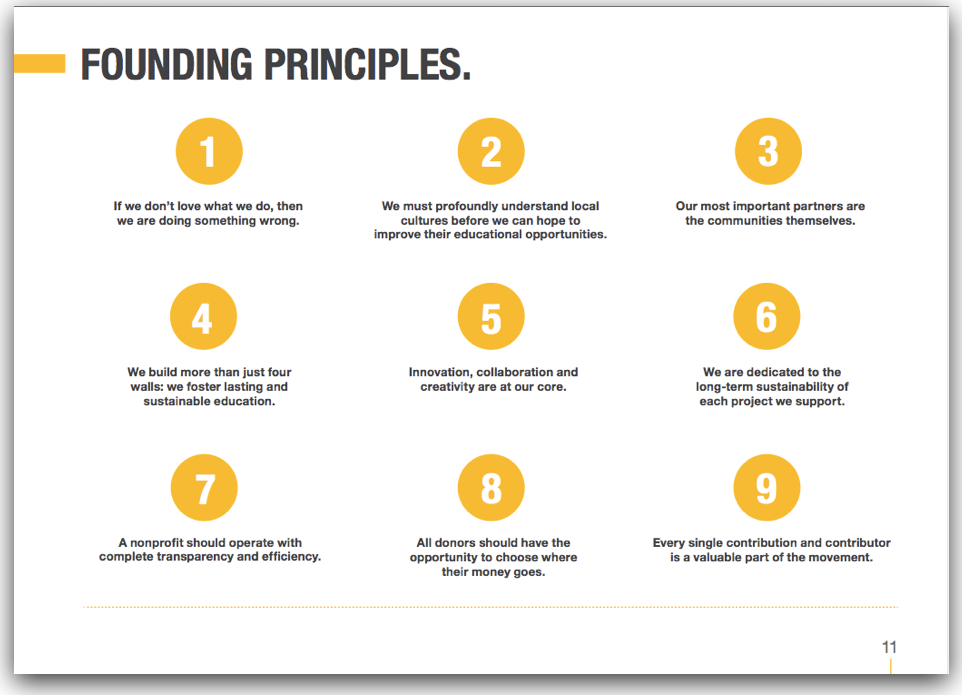 The emphasis in the paragraphs above are mine. There are lots of organizations that simply throw money at problems and hope they go away without actually understanding them, but partnering with a community and developing change inside-out is what drew me to PoP – their focus on sustainability throughout each project.

There are 67 million children in the world without access to education. For them, going to school is impossible. Literally. PoP has built 50 schools over the past few years and over the next few months, they want to build 50 more – a goal that’s seemingly impossible (in fact, they’re calling it their “impossible ones” campaign – I told them I’d allow them to use the word ;)).

Since doing the Impossible is kinda our thing, I thought to myself, “So what are we going to do about it?” How can we as a community contribute?

We’re going to raise $25,000 as a community by the end of 2012 in order to build an IMPOSSIBLE school and provide the possibility of education to 1,000 students.

In the League, we’ve got a group that’s donating to Kiva. Almost lent a little over $8,100 to entrepreneurs all over the globe (and counting), but as we’ve talked, we wanted to do something more. We wanted a community challenge – one that would have an effect that you could feel, touch, see and experience – and that we could all be in together.

Well, you wanted a challenge? We got a challenge. As a community our goal is $25,000 by the end of 2012 in order to build a school in Guatemala and provide access to education for 1,000 students.

When, we hit that goal, we will celebrate enthusiastically, but the person who helps raise the most amount of money will come with me to Guatemala and actually help build the school that we’re fundraising for.

Yes, We’re going to actually help build the freaking school.
With our hands.
Raising money is one thing. It’s cool to “know” theoretically that you helped contribute to actually build a school and provide a entire community with education. It’s another thing entirely to actually go there, help out through the process and build the school with your own two hands while looking into the eyes of the people who’s lives you’re able to affect in a positive way. Doing stuff like this is what this blog and Impossible HQ are about – doing. We’ll actually go to Guatemala, help people push their own limits and do the impossible by providing a possibility for education, while living an adventure ourselves and giving back. That’s like a win-win-win situation. Triple boom.

After I ran a marathon: 26.2 miles in my Vibrams, I never thought I’d do it again. One marathon. Checked off. Done. Boom. That was it….at least I thought so… But then I kept thinking….what if?

I kept coming across stuff from people like Dean Karnazes and David Goggins and these crazy, stupid, impossible ultra marathons kept staring me in the face – asking me to do more – all the while daring me to try.

Over the past two years I learned I’m not very good at turning down dares. I couldn’t let that challenge stare at me and dare me like that without knowing if I could actually do it.

So while walking around Portland a few weeks back, I put down my money, signed up and started training. I’m doing something crazy.

I’m running an ultra marathon in Chicago on October 27th.

There’s been a few things that have been tough, and then a few that have HURT – and a marathon hurt – but I’m going farther. I’m running the Chicago Ultramarathon – my first ultra marathon ever – and checking it off my list while raising money for our school. It’s going to be really, really hard,  and a little crazy, but it’s absolutely going to be worth it.

5 Ways You Can Start Today

But this isn’t just about me. This is a community challenge and it starts today. There are a few obvious ways to start with this (see option #1), but we’re also arranging a few specific community events to raise money for this but lets take all this out of the hypotheticals out of this. Here are 5 concrete ways you can help uso lets take this all out of the hypothetical “shoulds” and
start today.

Bonus #1: If you know of (or are) a company, business owner, or organization who’d be interested in getting involved, contributing, matching and doing something impossible, we’d love for you to get involved.  Shoot me an email now at joel [at] impossiblehq [dot] com
Bonus #2: If you’ve got an event or something in your area that you’d like to utilize to help rally people to raise money for our Impossible school – let me know at joel [at] impossiblehq [dot] com.

The math is simple. If 1,000 people donate $25, we’re done. Boom. We hit our goal easily. I know for a fact that we have a community of readers that number much, much more than 1,000 people – there’s no question about that.

How many doers do we have?

Here’s your chance to put your money where your eyeballs are and literally change people’s lives. With a few minutes of your time and some spare change, you can give someone the opportunity that’s so prevalent in your own life that you probably take it for granted.

Do things that haven’t been done before – Russell Kirsch.

The campaign is called the Impossible ones. Check out the launch video featuring footage from our bungee jump, me and Sophia Bush (as well as a few other people).

$25,000 is a massive goal, it’s scary and big enough that we just might not be able to pull it off – still we’re going to try like hell and we’ve already got a head start on it. After our Plummet at the Summit bungee jump in July, the team at Bungee.com pledged $1,000 from the event directly to our Impossible school. Thank you Casey!

The one reason you should join and be a part of this: You have so many possibilities available to you. You GET to to choose to push your limits, live an adventureand do something impossible. There’s a huge portion of the world that doesn’t get that opportunity. To them, impossible is basic stuff: clean water, an education…a chance. Whether you realize it or not, when you help other people expand their limits, you not only get to experience how capable they are, but how much more capable you are as well. Lets do this.

Tell A Friend To Do The Same

(I just put in $100 myself) Lets build an Impossible school.