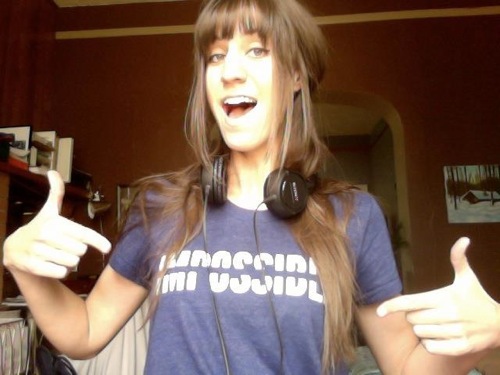 We’re trying something new today. There’s a ton of really interesting stories going on in the impossible league and there’s almost 300 people involved in it. In order to highlight some of the impossible things people are doing, every Saturday from here until I decide to stop it, we’ll be featuring someone from the League doing something impossible in their impossible shirt.

First up: Kristin (1/2 of AllofUs Revolution) is repping her shirt during a busines marathon session before their recent launch. In case you don’t know them, Kristin along with her business partner Shannon just launched a new website for their new minimalist travel clothing line call {r}evolution apparel and started a Kickstarter campaign for the first piece in their line – the Versalette. The project is really cool so check it out and consider funding their awesome new initiative and HUGE congratulations to the girls for launching their line.