You are here: Home / Adventures / Kiteboarding In Puerto Plata

Kiteboarding has been on my Impossible List for a long time.

I tried it a few years back in Aruba – before my blogging days – but never got the hang of it and spent most of the time getting dragged around by a kite, involuntarily chugging salt water and living in constant fear of losing my board shorts. 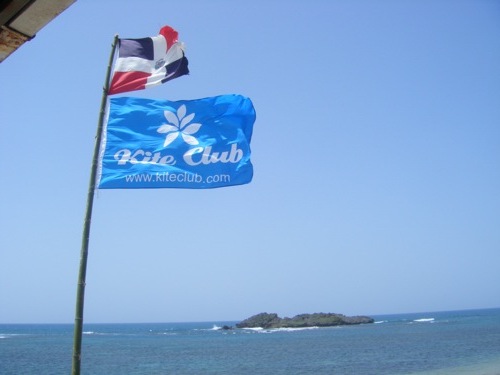 Ever since, I resolved that I would figure the sport out.

This weekend I finally got that chnace.

One of my housemates and I decided to go on a random adventure last weekend. We jumped in a bus on the way to Puerto Plata (a beach town on the north side of the Domincan Republic), despite having no idea what we were actually going to do or where we would stay.

We figured that we’d figure it out on the way – that always works out well, right?

We showed up at the bus stop in Puerto Plata and walked about an hour along the beach. After buying a cheap pair of sunglasses from a Haitian vendor and sitting down for drinks overlooking the water, we started to see kites flying around in the ocean. Like insects to a bright light we caught ourselves staring and moving in that direction once we finished our drinks.

Sure enough, 1/2 mile or so down the beach – there was a kiteboarding club, school and shack. 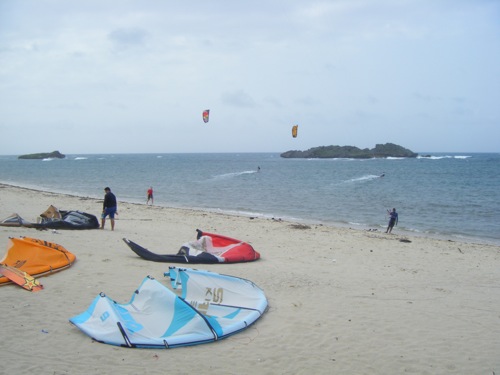 We walked up, and after staring at the kites and boarders flying around off shore, I think I blurted out something to the extent of “I WANT TO DO THAT!”

We walked up to one of the Domincans and met Fernando – the owner of Kite Club Puerto Plata, asked about lesson. As we talked with Fernando, we found the shop was the only one in Puerto Plata and that lessons usually take only 3 days – the exact amount of time we had planned for the trip! (See, those things DO work out).

We were actually surprised by seeing any kiteboarders at all in Puerto Plata. While the DR tends to have great kiteboarding condistions and locations, usually when people talk about kitebaording they’ll talk about Cabarete (the same place Tammy Camp set her kiteboarding world record) – a town about an hour east of Puerto Plata – a place that, while it has great winds, is incredibly crowded and bit of a tough place to learn since you’re dodging other kiters all the time.

The first day we got to play with a toy kite. Seriously, it was maybe 3 meters wide – I’m pretty sure I’ve flown bigger kites on my own before. We did a bunch of training exercises, learned to steer the kite and was about 3 meters wide and we learned to steer. We started pretty late the first day, so after an hour or two with the training kite, we were done for the day. 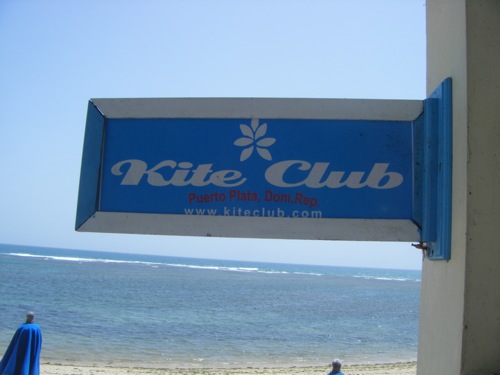 Day 2 was reminiscint of Aruba. While we got to upgrade to a big 4-line kite 7 or 8 meters wide, we spent almost all day in the water learning the reaction speed differences that come with a larger kite. We did a ton of exercises where we started on one point in the water and used the kite to drag us to the other side of the beach while you stretch out – full superman style. They called this body dragging – the first few times I did it, I thought it should be called drowning.

As we got better, I started to drown less and less and actually started to get a feel for what I was doing and understand how the kite was going to react to my actions. By the end of the day, I was actually controlling the kite pretty well.

For Day 3 we had enough of the training, it’s time to jump right in. We did a few more body drags (much less drowning this time), we jumped on the board with an even bigger 9 meter kite.

The first time on, I tried to stand up and bit it hard almost immediately.

On my second try, I managed to get up, and start riding for 50-100 yards or so before biting it hard.
Yes it was also on video

After that – I was pumped and built up enough confidence that we spent the next few hours kiting down the beach until I crashed, running the kite back up the beach, doing some more minor drills here and there when I lost my board and having a blast.

[you can see just how pumped i was here]

I dont’ know how it happened, but we managed to spend 5 hours on the water and it seemed like maybe 90 minutes at the most. I looked up and it was almost 4pm like *that.* The only thing that could tell that it really had passed that fast my was my ridiculous farmers tan from rocking the impossible shirt underneath my harness.

But, when we came out of the water, we had done everything we needed to for our Level 2 IKO certification and Fernando had our certiication cards ready for us. BOOM.

The Verdict:
This could very well be incredibly addicting. Now, next time I head to a beach with decent winds, you can bet I’m scouting it for a kite rental, a solid board and a good place to crash excessively. I still need to spend some more time on the water before I can start doing flips, jumps and all sorts of ridiculous tricks – but that’s just another good reason to come back.

Overall, kiteboarding was incredibly fun, fast and challenging – and like most of the impossible things I do, definitely worth all the crashing and burning I did to learn. 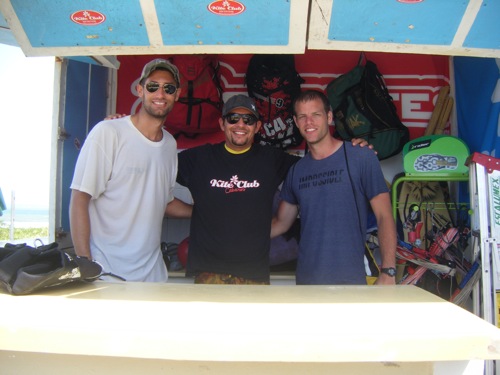 I’m working on incorporating more video into the adventures I go on. We actually have a lot more video from this adventure that I’m editing as we speak. This should be ready in the next few days. Stay tuned (I’ll update the post with it when it’s done).

Big thanks to Tammy Camp for recomending Kite Club.

Disclosure: Fernando hooked me up with a deal to do this with him. 1 because he’s a baller and two because he’s nice like that. If you’re on the north shore of the Dominican Repubic, hit him up at Kite Club Puerto Plata – he knows his stuff. You can find them on facebook. Thanks for the lessons Fernando.