You are here: Home / Hacks / Life’s No Good In Draft

I’ve got a running joke with my friend Michael. He has a blog which he’s been writing for a bit. In an effort to hold him accountable, I ask him every now and again, when it’s been a while since he last posted something, how it’s going. I usually get this response:

Oh, I’ve got a lot of stuff I’m working on. I’ve got a couple posts in draft.

Oh, I didn’t know those counted.

Fortunately, Michael is the type of person who dishes it right back out when I do the same thing, and, whenever we find ourselves talking about drafts, we say to each other, “Oh, I bet those are great!”, implying that they are, in fact, not that great at all. The joke eventually turns into one of us noticing that the other hasn’t posted in a while, and letting him know:

The implication is that nobody can enjoy the drafts. In fact, the best posts in the world don’t do anything in draft, because no one can read them. The real message behind that joke is “don’t tell me about all the great posts you’ve got in draft, because, until they’re published, they don’t count.”

I almost let this post stay in draft, and, of course, it ended up getting splashed across Oprah, the Guardian, Hacker News, Discover Magazine, and a lot, lot more places. It’s been my most popular article ever, and it almost never made it out of draft status.

I didn’t think it was any good. But I clicked publish anyway, because great stories don’t do anything if they stay in your head. They’re no good in draft.

From Writing To Life

Not hitting publish for a while might mean your writing stalls. This isn’t fatal – except possibly for your writing -, but it will stop your growth as a writer.

Here’s what I mean:

Plenty of people spend lots of time planning life. Here’s what I’ll do when [insert XYZ here]. They’ve got list after list after list, but it’s all cerebral – all played out in a fantasy in their heads.

Meanwhile, back in real life, they’re doing nothing.

That’s why I hate bucket lists. They represent a life of plans, not a life in action. And when all you do is plan, your story stalls. You end up believing your plans count. You end up living in draft. There’s only one problem with this: your plans don’t count. Your action does.

See, living in draft is way more dangerous than writing in draft because it doesn’t just stall your writing. It stalls your life. 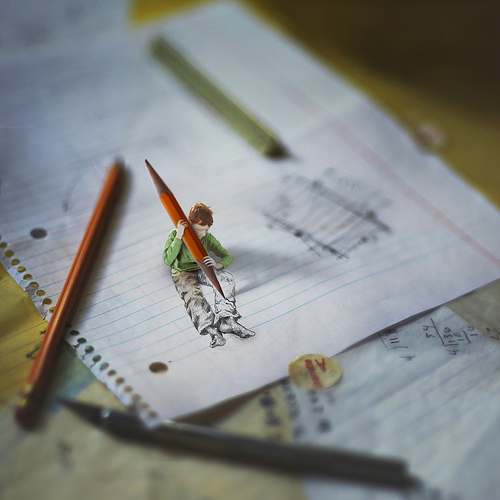 How To Know If You’re Living In Draft

So, how do you know if you’re living in draft? Here are some symptoms:

Use the #1 productivity hack in the world – make a decision. Then use the best advice in the world:

If you’re worried about screwing something up, screw it up as badly as you can. Make rejection and failure your top priorities, and see if they really are as bad as you fear.

My friend Dan always writes, “I’m about not being a p*ssy.” They’re strong words, but they’re Dan’s words. If you don’t like them, use “scared” instead. I heard that sentence a long time ago, and I’ve internalized it like this:

I don’t want to ever not do something because I’m scared.

Don’t Be Too Careful

There’s been a refrain going on in my mind lately:

You’re being too careful.

If you’re a writer, be like Johnny, and just publish all the time. Be prolific.

If you’re a person, hit publish on your story. Screw up all the time. Be prolific. See how quickly you can make the current iteration of your impossible list out of date.

Either way, hit publish on your writing. Take action with your story.

You only get one go around. Stop living in draft.

I’m knocking out one of these things myself. I’m hitting publish on this post, and sending out the email, then I’m headed to O’Hare. I have no idea where I’m going, but I’m going to knock another thing off the list:

Let’s see how this goes…