You are here: Home / Fitness / If Life Seems Hard – It’s Time To Get Stronger 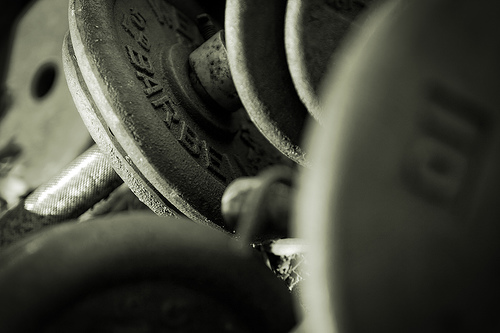 This last year was a bit tough.

I won’t go into a lot of specifics, but suffice it to say it was tough. I had a lot of random crap thrown at me this year.

I don’t really know why it was rough:

But it’s been a little hard. And as the year wore on – I noticed a worrisome trend:

I didn’t like that – so I did something about it:

I woke myself back up.

It’s easy to complain that life seems hard sometimes, but that’s not how it works.

Life is hard. That’s the point.

The purposes of life’s challenges is to push you. To grow you. To make you stronger.

Physical challenges are the same way.

The purposes of weights are to push you. To grow you. To make you stronger – by breaking down your muscles and building them back up.

But no one ever goes into a gym and gets mad at the weights for being heavy.

“Man, these 25lb weights are way heavier today than they were yesterday!”

And if it does – it’s not the weights fault.

The iron never lies. The weights don’t change. The mileage is the same.

The metric is there. Will you meet it or not?

Will you step up to the challenge? That’s the real question.

Life doesn’t change. It’s going to be hard. There will be challenges.

Will you step up to face them?

Your ability to face & beat the challenges in life – doesn’t depend on whether or not – life will be hard. However, your ability to lift them depends on how strong you are. The challenges aren’t arbitrary punishments – they’re specific challenges designed to strengthen a piece of you as a person.

If life seems hard right now – maybe it is. And maybe you can get through it by moping, complaining and being upset that the weight is heavy – that life can be hard sometimes.

Or…just maybe…you can turn & face up to it, take a cold shower, embrace the suck and use it as a chance to get stronger.

That’s my plan. What’s yours?

I was in the middle of writing this post last night & I saw this 2-minute video by Elliot Hulse that talks about this exact same thing. Fair warning: he uses profanity. If that bothers you, don’t watch it (but you should watch it anyways).