That got your attention huh?

Recently, I moved into an office and in the brief time I’ve been there, it’s dramatically helped with my productivity, fitness and overall quality of life.

But first, let’s back up really quick.

Since I quit my job in 2011, I’ve worked for myself – anywhere in the world. I’d consider myself a digital nomad (although that term doesn’t make sense to anyone who isn’t one).

I typically worked from coffee shops or my house or apartment. Wherever I happened to be was where I worked – as long as it had good internet.

Well I started to bump into a few problems (many of them mentioned by the Oatmeal in this comic). 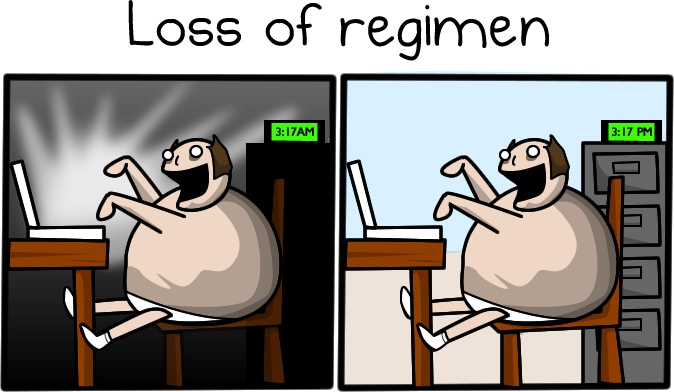 In other words – even though I could work anywhere at anytime – I found the reality was that I was working everywhere, all the time. To make things even worse, I found myself focusing more and more on work without getting anything done.

Pro tip: If you want to know where your priorities are – take a look at your finances. What you value is shown by where you spend your money.

So I was done.

No more home office – or at least that wasn’t going to be the “hub” of my operations anymore.

My lease was up, so I sold a bunch of the stuff that I had picked up since last year’s purge and downsized tremendously again.

I don’t need to go on and on about minimalism – there are people out there that do that much better than me – but I’ve found that I enjoy spending money on tools, assets, experiences and people. Spending money on “stuff” isn’t very enjoyable to me and being able to throw away or sell my stuff is actually a highlight (and incredibly freeing).

So why did I get an office?

So, I quickly went out and bought 5 shirts, 5 ties, 3 pairs of dress shoes and rented a cubicle.

I decided to rent an office space at Crossfit Humanity in San Diego.

Whether or not you’re a fan of crossfit – I did this for a few reasons.

So, instead of playing around on reddit, facebook or any other common waste of time, I’ve put myself in a situation where I’m surrounded by the things I say my priorities are – fitness, productivity and my business.

Since I’m surrounded by just that on a daily basis – it’s SO much easier to actually do it.

It also has a few other benefits:

It gives my day movement

On top of all the other benefits, having an office gives me a place “to go.” It gives me movement throughout the day which helps me stay productive on an ongoing basis.

This is the same methodology & mentality behind “workstation popcorn.” By moving myself throughout the day, I give myself internal cues to finish one thing and move on to the next.

Having movement helps break up my day into more manageable chunks, but also gives me “deadlines” to get stuff done on an hourly basis (I have to get that done before I leave the gym/office).

I’m not a fan of commutes, but I can be from my home to “the office” in about 7 minutes. Not bad.

I want to build a team

I’m starting to build a team both at Impossible and on Ultimate Paleo Guide. As I’m doing this, I find I’m spending a lot less time alone and a lot more time doing collaborative work.

Because of this, I want to have a space where I can do calls and do meetings if I have to either meet up with people or have “team calls.”

I’m still pretty new at the whole team building angle, but it’s something I want to focus on and grow. A space allows me to do that.

Working From Home Turned From A Benefit Into a Hindrance

At first, working from home can be freeing.

But it’s also really easy to get “stuck” at home. If that happens, you start to feel cooped up and it’s not fun.

I’ve found this incredibly true for me and decided that I wanted to get out.

I had the run down of the best coffee shops in San Diego to work out of (I should make a list), but even so – coffee shops don’t seem like “your” space.

Nice to be able to go to, but they get old quick.

Even if you have a home office – it’s nice to be able to go somewhere else and be productive.

Even though I can work from anywhere at anytime – my tendency is to turn that into working EVERYWHERE ALL THE TIME.

I have problems – I know.

Sure, it sounds like you’d get more done if you didn’t have to commute into work or leave your house during the day. Hypothetically, that sounds like it would work.

In practice (for me anyways), it’s a recipe for driving yourself crazy.

SO I CHANGED IT UP.

Setting up shop at the new gym/office (@crossfithumanity). I'll be based here for the summer – trying out a new office location (rather than always at home and bouncing between coffee shops). Gonna be fun to have a dedicated spot for videos and writing. Lots of stuff coming down the pipeline for @impossibleheadquarters @impossibleventures @movewellapp soon! The move is still in progress so I'll post sown something more when it's all a bit more finished up.

So How Is The New Office Working Out?

I get more done. I work out more often. I have better posture throughout work (seriously) and I’m getting better.

Oh, and I’m out of the house way more and knock out more of my work.

But it doesn’t come without it’s downsides. Not everything is perfect. Here are some of the downsides:

As it stands, the gym currently has no internet. Well, it has very BAD internet at best. There’s talk to fix it – but despite their current commercials – Cox does NOT have high speed access everywhere and AT&T is…well…AT&T.
The current solution is a satellite solution, but it’s slow and gets choppy when planes fly overhead (not ideal if you’re familiar with San Diego’s airport location).

> The only thing worse than no internet is slow internet.

For an internet entrepreneur, this sounds like a disaster.

“No internet, huh? How are you going to get anything done there?”

The answer is, maybe counter-intuitively, that I get more done than ever.

I used to use things like “self control” or “focus” apps to help me cut out distractions online.

This is sort of like the nuclear version of that.

Instead of spending most of my time online, I use the work space for writing, planning, phone calls and videos (coming soon). I see it as my creative “production” plant.

If there’s something I absolutely have to use the internet for, I can gamble on the internet or tether my phone up and be good to go. But I’ve found that I can “batch tasks” pretty well.

Then, post-work, I can schedule / upload it all either at home or at a coffee shop 5 minutes away.

This cuts down on total internet time DRASTICALLY, which is simultaneously boosting productivity thanks to Parkinson’s Law.

Even after getting an office & a car, I still was 60% of my previous monthly expenses. I have more mobility, more productivity, more freedom and more general happiness. I’m also taking care of myself better, learning new skills.

After about 3:30, the office gets pretty hot. I got an AC unit to help cool it down, but after 4 or so, I typically tend to skip out.

This is a little annoying, but it’s another incentive to get into the gym earlier in the day. It also gives me an incentive to LEAVE the office and switch activities at 3-4pm – something that I’m typically slow to do.

That’s really it (so far). I may have more downsides pop up, but I’ve been enjoying it immensely as of late.

Oh, and I forgot to mention that there’s an amazing sports massage therapist in the gym that’s literally right NEXT DOOR to my office. Sports massage has been singlehandedly THE BEST MONEY I’ve spent over the past year as I’ve recovered from injuries and gotten back to health.

I may or may not have already taken advantage of a mid-day office massage. #boom

It’s very possible that I’m in the honeymoon phase of this, but I think this is going to be a good long term solution for my work. I do enjoy cafes, but I don’t love being there or home all day. I’ll try to do a follow up on this in 3-6 months and give my thoughts on it once I’ve had more time.

Massive props to Patrick Hitches at Foundation Fitness & MOVE Coworking. He BUILT this original gym / office compound concept from the ground up in Cincinnati. I haven’t been able to do that yet (maybe someday), but he was the first one to get me thinking about working in the same space where I work out.

That’s it. I got an office and hopefully productivity will skyrocket. Oh, and for those of you that are wondering: it’s definitely not tying me down – I’m headed to Spain at the end of the week for the DCBCN conference to give a talk 🙂

image via The Oatmeal