Hey, I put some new shoes on,
And suddenly everything is right – Paolo Nutini [Listen]

—-
I’ve been needing new shoes lately.  My current shoes I got January ’09 for my last track season.  I’ve been wearing them since and they’ve been pretty worn down. I needed to get some new ones and I’ve been seeing and hearing a lot of Vibrams 5 Fingers shoes and hearing people swear by them. I sent out a shout on twitter to see if they really were the real deal and cc’d three people who I had seen blog about them before: Colin [Exile Lifestyle], Steve [Nerd Fitness] & Jess [Half Of Jess] [blackbirdpie url = “http://twitter.com/joelrunyon/status/14274145602”]

All 3 of them responded, and all three heaped praise on them. Also, Can I just say I love how supportive/open/accessible everyone in the blogosphere is? It really is pretty awesome how many different people you can connect with. Just sayin’ =) 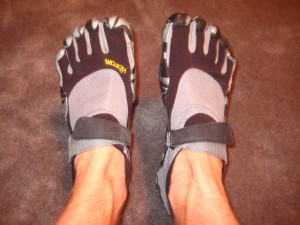 I got several other responses from the twitterverse, all overwhelmingly approving of the 5 fingers. I figured either Vibram has amazing social media skills or the shoes really ARE JUST THAT GOOD.

Either way I was convinced so I went ahead and bought a pair on Saturday. So far I’ve run 2x in them and I think I like them [although my calves are pretty sore  – you called it Jess]. It’s still a bit premature to draw conclusions though so I’ll do a post with my full thoughts on them in a week or so after I’ve had a bit more time with them.

[For those of you that haven’t heard of the guys I was talking to on twitter. Here’s a quick rundown]

Colin Wright [@colinismyname] writes Exile Lifestyle. He lives with 50 things and moves to a new county every 3 months based on what his readers tell him to do. [Colin just released an monster 250pg E-book revealing the secrets of what he does best – Networking Awesomely. I’ve bought & read it and can tell you it’s definitely worth your time. I can only hope he writes one soon on how he gets his hair to look so BA.  Seriously, how does he do it? ]

Steve Kamb [@nerdfitness] writes Nerd Fitness, a blog focused on well Fitness and Nerd…ness. Steve talks about Star Wars, LOTR and gaming in general. Steve’s amazing because not only is he incredibly strong but he’s also, you realize that he’s incredibly strong and not only capable of beating you up in real life but he’ll also pwn you like a noob in your favorite MMOPRG  [Honestly, I’m not even sure what that last sentence means.] [Steve wrote an epic post somehow comparing WOW characters to athletes in What’s Your Profession. My favorite part is after he names all the types of “professions” he decides to make up his own anyways.  Why? Because he can. That’s how Steve rolls.]

Jess [Apparently Jess doesn’t have a last name] Shen [@halfofjess] writes Half Of Jess.  She’s focused on reclaiming her life by living a healthy one and losing half of her body weight [hence the name],  She just started in February and she’s already lost over 40 pounds. O snap! I’d tell you to read her blog but at this rate Jess is gonna have lost all that weight and is gonna have to find a new name for her blog. [Jess wrote an awesome post on The Guide To Matrix Running. She doesn’t dodge bullets, but she gets pretty close]

[Sidenote] Yesterday made it exactly 1 month since I “officially” launched BIT. I want to say thanks to everyone for the comments, emails, and mentions on twitter. It’s amazing how many people I’ve met already in this short time. If we haven’t met yet, I would absolutely love to hear from you and learn how I can help you out to do what you want to do. =)