After about 4 days total in the US – split between the east and west coast – I landed in Bangkok.

I had a night to crash in the city before getting a driver and making the 3 hour trek outside the city to Khao Yai national park.

I went directly to packet pickup, grabbed my stuff plus a few extras at the expo, and headed to my next hotel.

Still “off” on my sleep schedule, I tried to go to bed at a normal time, but ended up falling asleep at 6pm local time and waking up at 3:30am – conveniently just in time for the race start at 5:30am. 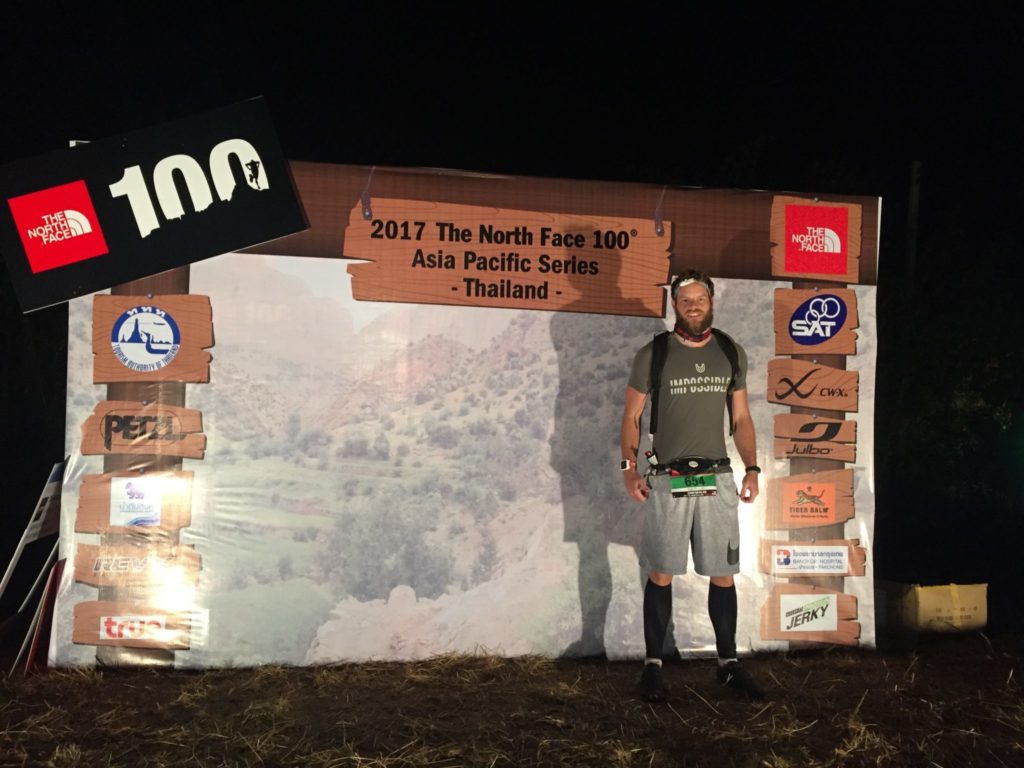 The announcer came over the speaker –

“Remember, one of the race rules is to not take photos!”

No photos at all? I turned to someone to ask.

“Oh, no, there’s a princess running the race – you can’t take photos of her.”

So with that, a small army rushed the princess to the front of the line and the race was ready to go!

Probably my first and only time running a race with a princess – pretty cool. 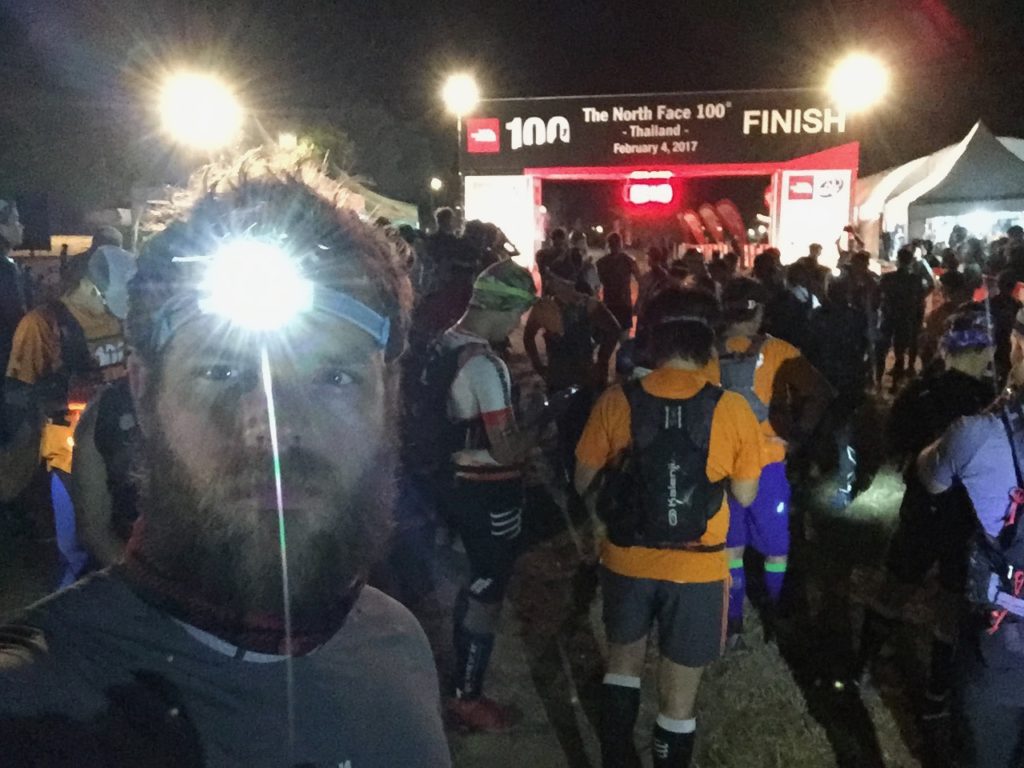 Luckily, the wrong turn ended in a loop, so while people added 1/2 mile to their distance, after ducking under a barbed wire fence, we were able to get back on the main track.

It was dark for the first hour and a half, which meant it was nice and cool. Just head lamps bobbing up and down along the path.

But I hate running in the dark, so when the sunrise came, I was happy to see it….for minute…

It was tough, and I definitely slowed on the climbs, but after 25k, I felt good. Surprisingly good in fact, and I thought – hey, I’m halfway done, the majority of the hills are out of the way, let’s kick this home!

Someone mentioned that there was one last single track left, but that it wasn’t that bad. I want to find whoever that person is and shake them.

After 25k, we turned off the main roads and paths, and the course spat us out into some grasslands. A few more rolling hills which weren’t all that bad. In fact, one section took us through a single track that I thought the person was referring to.

When we passed that, I thought for sure that the race was in the bag.

Ironically, I had tweeted this the previous day. I should have taken my own advice.

Expect things to be hard:

1. If it is actually hard, well, what did you expect?
2. If it turns out easy, then you get a nice surprise

At about 30k, we turned a corner and started heading up a sort of unmarked path.

This started my own personal hell on the course.

I power climbed for about 2 miles straight up. There was no running, there was barely even a path. Just slow going up and up and up.

After that, there was a half mile of making your way across a path made of rocks and grass. The path was more like “gaps in the trees” than an actual path, and when it finally came to an end, I thought I’d make up some time on the way down.

The downhill part was so steep and unmaintained that I was actually slower going down than I was going up – trying to get footing and make sure I didn’t step on rocks that would slide out from under me.

This part was so slow going, which was frustrating, but the technicality of it absolutely trashed my legs and mentally, it felt like this race was trying to break me.

I can’t believe just 10k earlier I was thinking I was going to breeze into the finish line feeling good.

I’ve never ever quit a race before, but this race, I seriously thought about it.

There were lots of “out-and-back” loop sections of the course, and I thought how easy it would be to cut across sections.

I never think about that stuff and it’s not my thing, but I did think about it – and it sounded like a good idea 🙂

But I didn’t come to Thailand to quit, and besides, one way or another, I had to get back to the starting line, so why quit when I was 80% done?

I have to say, I have done a lot of races and I’ve hurt plenty of times. This race, for some reason, had my number more than any other race I’ve done. Man.

After coming off the mountain, they sent us on a couple more loop-de-loops.

I tried to get my legs back in the game, but they were toasted.

After the first loop went easy, the next one sent us up another hill. Again, it just wasn’t funny anymore.

With about 5k left, I worked on finishing as strong as I could, but a quick glance at my facial expressions would tell you how the race really went.

We ended by running through some grassy fields and some locals homes, waving to the local kids cheering us on as we run through their front yard.

I turned one more corner and finished at the same starting line where it began. 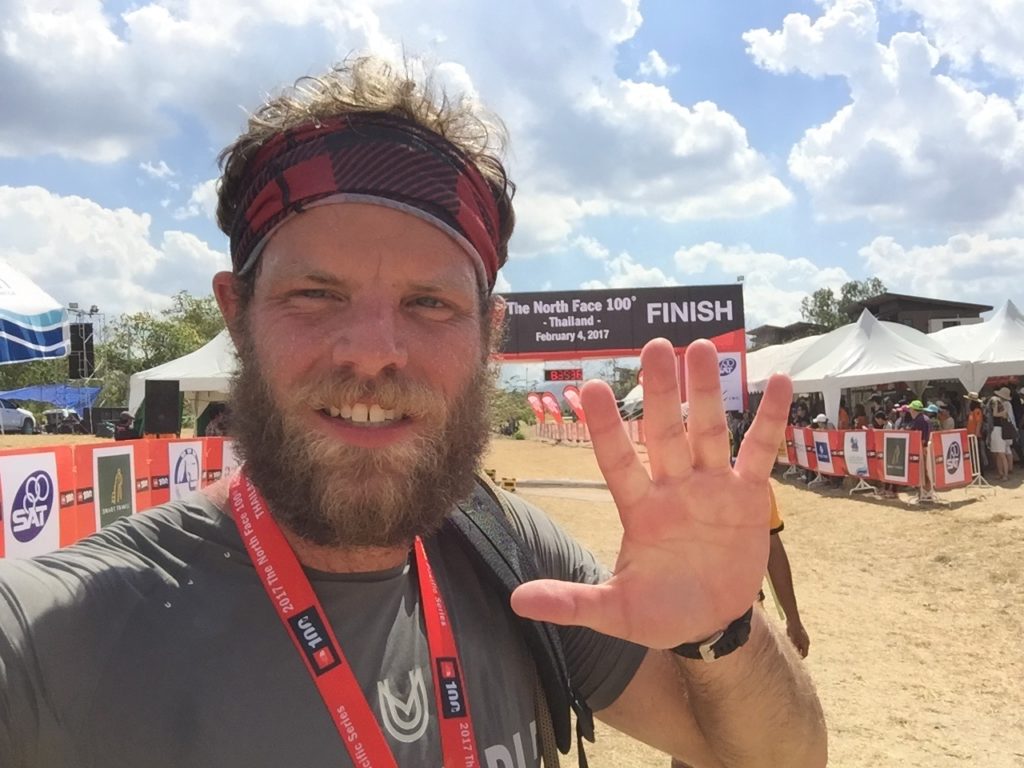 The race itself was very beautiful. The benefit to some of the hiking was that you had good views when you were trying to catch your breath, but the climbing routes on the single track were tough – maybe some of the toughest that I’ve ever done.

That section on its own as a 25k race would have been brutal, so throwing that on the back half of a 50k was gnarly. Now I know why it’s a qualifier for the UTMB, and it was definitely a challenge (even though it was a relatively short ultra at only 50k).

I got my first ever race penalty at this race (if it wasn’t hard enough). Apparently, I missed a mandatory race briefing. I was at the expo and listened to multiple talks, but somehow I missed a mandatory meeting and got docked 30 minutes. Good to know – maybe they would have warned me a bit better about the single track 😉

Maybe the longest 50k time ever.