You are here: Home / Adventures / Plummet at the Summit 2012

Interested in coming along on some Impossible Adventures in the future? Sign up for future impossible adventures here. 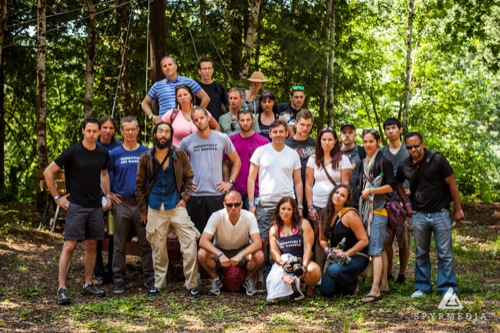 The Plummet Crew Doing The “Runyon-face”

Plummet at the Summit 2011 was an unexpected success. I wanted to go skydiving and was too scared out of my mind to do it, so I committed to doing it and asked if anyone wanted to come with me. I thought I’d have 4 people or so to sign up with me and I ended up taking 41 adventurers along for the ride. It turned out to be fantastic experience and both the annual Plummet at the Summit and Impossible Adventures was born. So when this year’s WDS rolled around, we knew we wanted to come up with another grand adventure. And while skydiving was great, but  year I wanted to do something a little bit different.

There’s a few different reasons we took people bungee jumping this year, the main reason being that with bungee jumping: there’s a decision point. Skydiving is fun, but for the most part, your instructor jumps and you hope you don’t look too stupid. With bungee jumping, you have to decide to jump. You get to make the decisions. Much like cold shower therapy, everything gets reduced to one simple step. You either step into the shower or you don’t. You either jump when they tell you or don’t. It’s very simple and you get to see what people are really made of when it comes right down to it.

The overall experience went off without a hitch. After having everyone sign away their lives (including a very foreboding “death waiver”), we piled into a few cars and made our way to the Pacific Northwest Bridge in mountains of Southern Washington along with a set of our own photographers and our own film crew (yes, we’ve got footage coming soon).

It was fun time before the World Domination Summit to meet a set of adventurers and get to know each other and bond over a near-death experience and do something that had been on most people’s bucket lists for a while. But as a whole, the #1 thing I was most proud of the entire time was that

27 people showed up at the bridge. All 27 people jumped.

It doesn’t always happen like that. Sometimes people can’t do it. They seize up and instead of jumping, they climb back to safety – but not this group. People terrified of heights told fear to suck it and jumped anyway. Some were excited, some were terrified and some didn’t know whether to scream swear words at the top of their lungs or pee their pants (or both), but each one jumped and loved it. Here’s how one jumper put it:

“Bungee jumping: If I could take the first 3 seconds of freefall and bottle it, I would chug that sh*t every. single. day.” – Asia

I could go on and one about the adventure, each person’s jump, and everything that happened, but we’ve got a few thousand words in photo format thanks to the Spyr Media team (Thanks guys – it’s just a matter of time until we make you the official Impossible HQ media team). Enjoy.

If you’d like the full set of photos, check them out at Spyr.at

Some of the jumpers decided to write up their own experiences on their own blogs. Here’s a few of them:

While you can get a good idea of what the experiences were through the jumpers stories, it’s even better better to live vicariously through yourself and experience these adventures first-hand. We take quite a few people on impossible adventures a few times a year. Experience the next adventure for yourself.
***
While there were quite a few Impossible shirts being rocked at the Plummet and WDS in general (way to represent!), the award for best Impossible Shirt photo of the weekend goes to Josh Furnas of Selfless Tees for his impersonation of the Incredible Hulk before hurling himself off a bridge and doing a 200ft gainer. Well done sir. Well done. 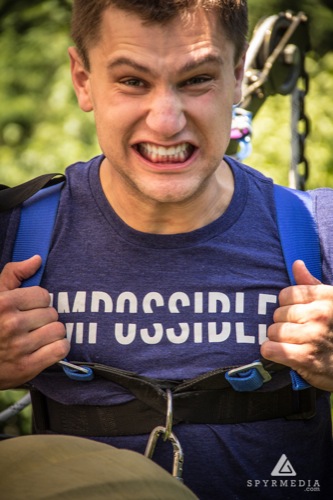 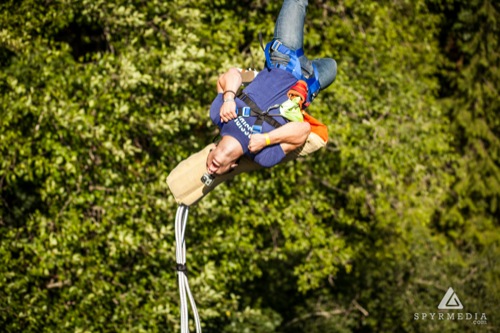 Jumping off a bridge or doing something else impossible anytime soon? Grab your impossible gear, take a photo and we’ll put you in impossible league gallery. Boom
Tweet
Pin
Share
0 Shares