You are here: Home / Adventures / Plummet At The Summit: The Very Unofficial WDS Skydive Adventure 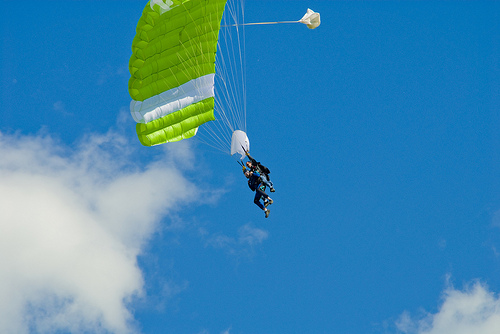 When I announced back in January my crazy idea to jump out of a plane at the World Domination Summit in Portland, I only knew one person that was going to go. Me. I thought I would get some interest via the blog, but figured that I might be able to get 10-15 people to sign up and come with me. That would be a very manageable amount of people and after all, I was asking people to spend $200 to to fall 13,000 feet to their sudden death with me so I was tempering my expectations. I thought it would be cool if I had a bunch of people join me, but I knew that one way or another, I was going to cross skydiving off the impossible list during my weekend in portland.

I posted the piece and got about the level of interest that I expected; 10-15 people gave me verbal commitments. I was pretty happy with that number and knew I could take more, but I let things go. No need to overcrowd the adventure. The next week or so, I woke up one morning and saw an email from Chris Guillebeau about WDS in my inbox where he mentioned that I was taking a bunch of people on a very unofficial skydiving adventure. I went to check my sign up page and all of a sudden I have a 63 people signed up on the interest form.

I just sat there for a bit. I was happy for about 15 seconds, then I realized…I am so screwed.

How am i supposed to organize 63 people jumping out of a plane? In Portland? 2,000 miles away and nobody that lives there drives cars!

I was stunned. Chris sent me a message on twitter.

“How many people are signed up for the skydive trip?

He responded in a way on Chris could saying “Yea, you might want to put a cap on it.”

So I closed registration and just sat there for a couple weeks. Not quite sure what to do. I had never been skydiving before, never been to portland before and never actually even contacted the skydiving place before I posted that post. Would they even be able to have 63 people jump in a day? Now I was planning to do all three and take 60 people along with me. Stupid, stupid, stupid.

Over the next month and a half, I made a bunch of phone calls, collected deposits (which brought the total number down to a “manageable” 40) and checked weather.com incessantly.

Pro Tip: When organizing something like this, always collect money early on. Asking for money separates people who are really interested from the people who like the idea, but not enough to commit to it with their own money. If you have a large number of people you’re working with, this helps narrow the field considerably (in my case, 63 people turned out to be about 40).

The reputation of the Pacific Northwest’s weather preceded my itself and up until 3 days before the jump, we thought it was likely going to rain and ruin the whole day (Chris even renamed the opening ceremonies the H20pening cermonies just in case that happened). Once again, I remembered that you always get to choose your attitude, so I told people that we would be going to the jump zone one way or another, rain or shine and let the staff at the jump zone tell us if the weather was so bad that they were going to turn down $10,000 of our money keep us on the ground. 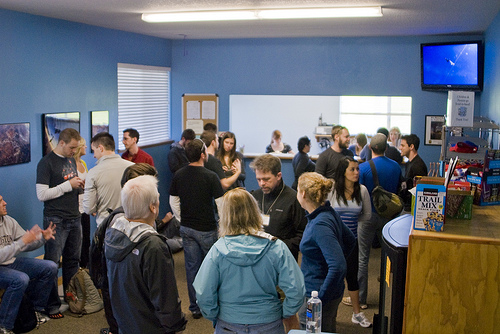 Jump day finally came and the day went amazingly well. The 40 people that committed to jumping were all amazing, incredibly flexible people. The small group of drivers I had, turned into a small army of volunteering chauffers (in Portand of all places!).

We arrived at the jump zone at 10am and spent the first hour and a half or so filling out paperwork. If you’ve never been skydiving before, you have to sign waivers that basically say, you’re jumping out of a plane and it’s not their fault if the parachute doesn’t open. 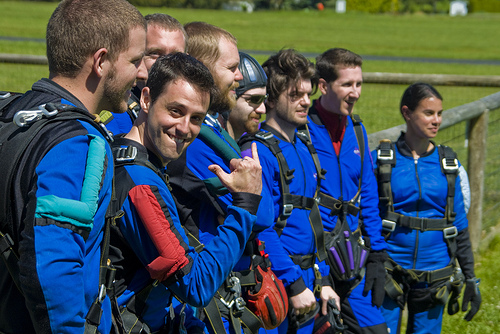 They started funneling us into training, 12 at a time and jumping 6-8 people at a time. The jumpers all landed in the field right in front of the office building where everyone was waiting, so everyone got to see everyone jump. The day lasted a good 6-7 hours. We started at 10 and the last jumpers ended around 5pm, but everyone still got back in time to shower and get ready for the main event. Success! Oh, and we had blue skies and warm temperatures all day. The staff at the jump zone even mentioned that it was the best weather they’ve had all season. Take that Pacific Northwest weather! 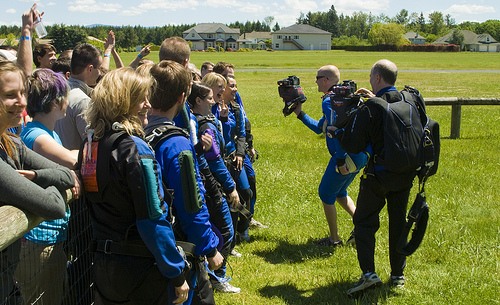 Besides being a lot of fun, the skydive was a great way to start off the weekend. In a way it was sort of a pre-kickoff event kickoff. Several people knew each other from twitter handles and gravatars and a few people had actually met in real life. There were a lot of new faces meeting new faces on a much more personal scale than later on in the conference crowds where there were 500 people. Also, you tend to bond with people in a much more intimate way when you’re facing a fear together than when you’re sharing a drink with them. If you want to get to know someone well, jump out of a plane with them. It’s very telling and an experience you’ll be able to look back on together as a shared experience. 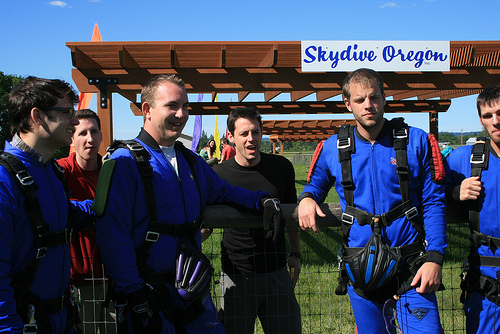 A lot of people asked me if I marked anything up or made any money off of this, and the answer is no. I probably could have based on the time committment required, but this was more about the experience than the money. If money was the end goal, it certainly could have been made, but I enjoyed organizing an event where people get to stare fear in the face and walk away victorious. I had a lot of people come up to me and say “I wouldn’t have jumped if there weren’t 40 other people coming with me.” I’m not sure what that is worth, but it’s worth at least a few bucks for sure. I’ve been asked if I’m going to do this again next year, and I’m not sure. It was a lot of work and it was certainly worth it to see almost 10% of the WDS attendees to come to an event I organized on a whim, but I’m all about originality so we might have to find a new out-of-the-box activity to do (extreme ironing anyone?).

One key leadership takeaway from this whole adventure: If there’s something you want to do, don’t ask others if they like your idea. If you really want to do something, just do it. Invite other people to come along if they want, but do what you want because you want to do it. I was going skydiving in Portland no matter what. It was happening whether 4 or 40 people were coming along with me. That attitude refelcted itself in everything down to the title of my announcement post. The title of my post was “I’m Jumping Out of a Plane at WDS, Who’s Coming With Me?” The turnout for the jump would have been a lot different if I would have asked “Does anyone want to jump out of a plane with me when we’re all in Portland together? Please?” Based on past experience, If I would have approached this adventure like that, in return, I would have gotten a mixed reactions, a few half-hearted commitments and a lot of flakes who didn’t turn out. Instead I created my own adventure, got excited about it and then invited people into it. People are looking for adventures to join up with. Go and create one and ask them to be a part of it. They’re waiting. 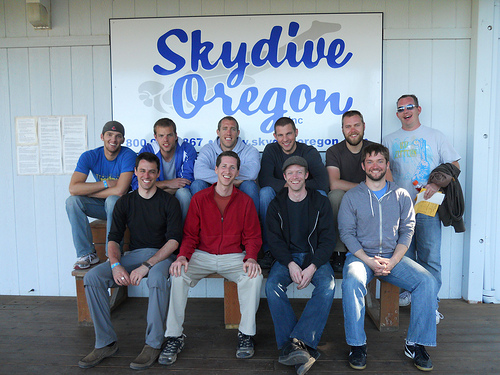 Videos and photos of the whole adventure are available on flickr. Big thanks to Dave, Mark, Justin, Brandon and Kohan for taking these shots. Feel free to use any of this media as you like (added bonus if you’re nice and give credit where it’s due) –> Very Unofficial WDS Skydive Adventure.

I have video & photos of my falling out of the plane and looking like an idiot. If you can’t wait to see me make awkward faces and look stupid, stay tuned. I’m still waiting on the video, but the previews I’m gotten from the photos mean you’re probably in for a few good laughs.

A group of us went bungee jumping the Monday following the conference as well (we were on an adrenaline spree and I had been drinking a lot of Red Bull). That post recap (complete with photos as well) is coming soon.

Several jumpers were asking me who jumped and looking for a way to keep in touch with each other. Here’s an semi-exhaustive list of the jumpers, their twitter handles. If one of them is wrong, or if by some chance, I missed someone (I don’t have last names of people that paid in groups), let me know.

If you get a chance, you should probably check out these daredevils.

The alternative post title that got left on the editing floor was “How to get 42 people you’ve never met before to jump out of a plane together while somehow arranging transportation for them all to get an hour outside of a city ghat doesn’t believe in cars without using public transportation.” It’s too bad, I would have totally dominated that long-tail keyword phrase on google but hat tip to JD Roth for the new & much improved title.

Leave a Reply to Chris "Not a Skydiver" Guillebeau Cancel reply