This blog post is coming to you from Lima, Peru!

I’m currently on a 8 hour layover in Peru on my way from San Diego to Punta Arenas Chile for race 1/7 – the Patagonia International Marathon. The race is 63km (40 miles) through the picturesque landscape of Patagonia. See below for an idea of the scenery that I’m in for. Needless to say it’s beautiful and I’m excited 🙂

The race is 40 miles and the park we’re running through (Torres del Paines) is supposed to have some incredible winds. But as tough as the race will be – just GETTING there is going to be just as tough (if not tougher). Turns out – it’s not that easy to get to the southernmost point of South America -there’s no direct way to do it! (Who would have thought?)

For example – my trip from San Diego to the starting line looks like this!

(yes, we have a 20 minute walk to the starting line after it’s all said & done).

I started at 6pm yesterday and I’ll get in at 9am on Friday (yikes!). As it turns out – there’s only a few jumping off points in the US to leave from (LAX, DFW & NYC) and almost all flights to Punta Arenas have to go through Santiago, Chile. Since there’s not a huge amount of flight times available (and the race is bringing in a lot more people than usual) – end to end trips were a bit harder to book than normal so I had to create my own itinerary & book some book-end flights to make it all work.

It’s been a little of a run-around, but I’ll be able to store some of this info away for my next trip back here in a couple months (since Punta Arenas is the jumping off point form my Antarctica trip!). It looks like I’ll be making this crazy journey again in November for Race 2 in the 777 Project (the Antarctica Ice Marathon). 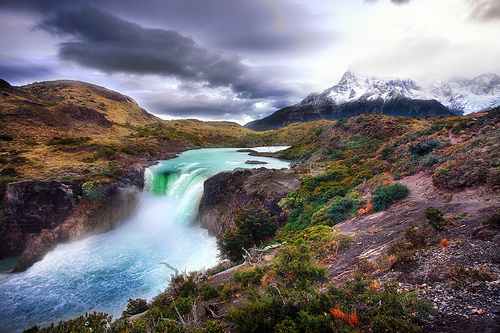 If you’re still uninitiated with the 777 project. It’s a project to run 7 ultra marathons on 7 continents in order to raise funds & awareness to build 7 school with Pencils of Promise – a non profit that builds schools & creates educational possibility to those who would typically not have access to any. They do the majority of their work in Laos, Ghana, and Guatemala.

So far, we’ve raised almost $10,000 towards our goal so far. If you haven’t contributed yet, I’d love for you to join the $25 challenge and be a part of what we’re doing to build 7 schools and change lives around the world.

As great as it is to continually push your limits – it’s good to look back on where you started too. As tough & windy as that race was – Patagonia is a lot longer & a lot windier. Bring it on. #dosomethingimpossible

#tbt to my first #ultra ever. The 50/50 ultra in #Chicago we did to build our first school in Guatemala. One of the windiest races I’ve ever been and the one that started this #ultramarathon bug of mine.

#tbt to my first #ultra ever. The 50/50 ultra in #Chicago. One of the windiest races I've ever been and the one that started this #ultramarathon bug of mine.