You are here: Home / Mindset / How To Know When To Quit Or Keep Going

How do you know when you’re doing something impossible, if you need to keep going or if you need to quit and try something else. A lot of times people say they feel like they’re banging their head against a wall.

Everyone asks this & most people don’t like the answer.

Here’s my answer: most people just give up too soon. There are a lot of things you can do just by wanting it more than anyone else & sticking with it when most people want to quit. If you’ve tried painting one day and you’re mad you’re not picasso – suck it up buttercup – sorry to burst your bubble but even snowflakes have to do work – welcome to life.

That’s the root cause that makes most people ask the question – they come into life with the wrong expectations. They expect it to be easy and when it’s now – they think they’re doing it wrong and need to give up right away.

Do this differently. Expect it to be hard. That way, when it is actually hard – you’re not surprised and you can put your head down and keep after it.

That’s why 95% of people simply give up too soon.

If you’re thinking “oh, that’s not me” – look in the mirror and do a gut check. Yes, statistically, this is probably you.

The other side of the coin is that sometimes you banging your head against the wall – and you’ve simply found the hard part of the wall. The wall still needs to come down – but you need to attack a different part of it.

“Giving up” in this context doesn’t meant stopping altogether, but maybe trying a different part of the wall, trying something new and seeing if a new approach might work better.

You’re giving up on the tactic, but not the end goal.

Bang your head enough on a wall with drywall and you’ll eventually break it down. Bang your had against a wall where the studs are and you’re just going to get brain damage.

So that’s part of the puzzle too…

But – there’s also a point where you decide that maybe the wall isn’t even worth breaking down? That you’re just doing it for reasons that don’t really matter.

As I was thinking about this the other day, I drew this in my notebook to help visualize how to decide what to do. 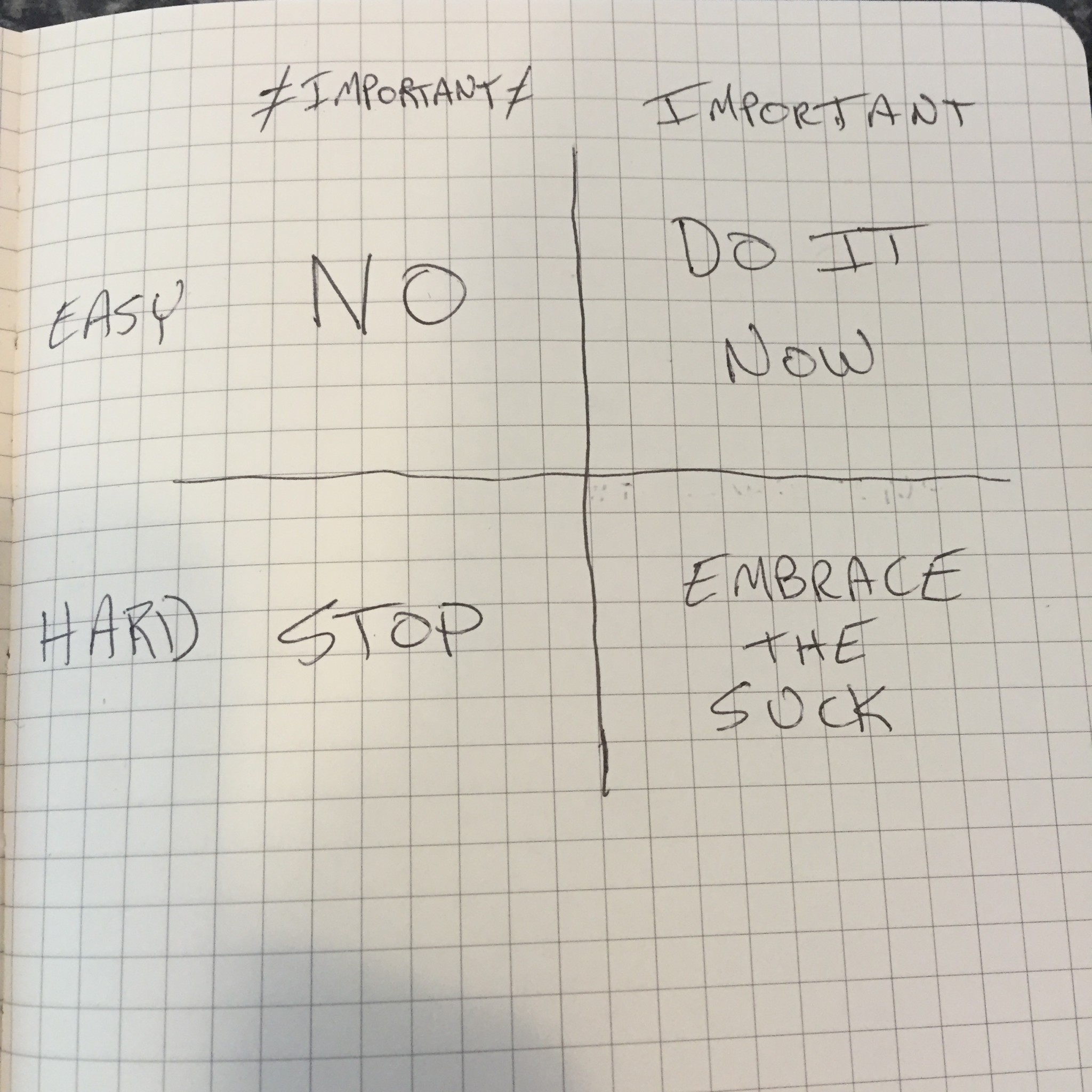 There’s a matrix. There’s the level of difficulty and the level of importance. Most things tend to fall into 1 of 4 categories.

If something’s important to you, do it. It doesn’t matter what it is, do it. If you can’t get it out of your head, sit down and figure out how to build brain reinforcements because that freaking wall is coming down.

If something isn’t important to you – why the hell are you still doing it? Don’t do any of this.

If something is easy – there’s probably a lot of people trying to do the same thing – why are you wasting your time on it (if it’s not important). If it is easy – you should get it done ASAP.

Important and Easy = Do It Now

Important and Hard = Embrace The Suck

Not Important and Hard = STOP – You’ll get brain damage.

Now go do something impossible & stick with it.