You are here: Home / Hacks / Run Through The Rain 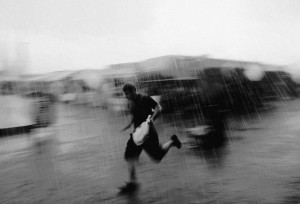 If you’ve been reading the blog for any time, you should know that it’s general knowledge that I’m not the greatest runner in the world.  I try hard and I am actually getting noticeably better but it’s still not my favorite activity in the world.

The other day I went out late for my run and decided to go on a different route than I normally do. The run was to be about 4.5 miles which is still somewhat of a stretch for me since I’m getting used to long[er] distance running. Now I can usually strike a good pace for a 5k or about 3 miles, however, after that, my endurance usually dies pretty quickly, my form goes to crap and I start whining like a little 12 year old girl.

As I started out on my run, Just as I was getting to that 3 mile mark, the rain started to come down in full force.  It started off drizzling, but quickly turned into a downpour.  As I started to pass the 3 mile mark I thought great, not only am I gonna lose my endurance here, but my clothes are soaking, the rain ain’t stopping and I’m still a few miles away from home.  Awesome.

That’s when I realized I had a choice.

I could piss and moan and complain like a little 12 year old girl OR I could just man up, kick some a** and run through the rain.

The rain was just another obstacle, another place to make a decision and I could either resent it or embrace it.  That’s it.  Resenting it doesn’t do much good except for getting me upset and angry about something I can’t control.  Embracing it gives me the power.  When I accept the obstacle and look at it as a challenge to overcome, the onus is on me to figure out how to do it.

Looking at the two options, the latter was definitely more appealing so I embraced it. I kept on running, re-energized by thinking about all the positives of the situations rather than the negatives. Instead of being upset that I got to the halfway point before it started raining, I just kept telling myself, I was already halfway done.  This seems like a simple switch but it’s absolutely amazing how your mindset changes when you do this.  Immediately, I picked my head up, I focused on my form and I stopped complaining to myself.  My thought process changed and it affected everything.

I’m halfway through my run.  The first half was ridiculously hot and now it’s starting to rain.  Great.

I’m halfway through my run.  The first half was ridiculously hot and now it’s finally starting to cool down. Great!

Why I’m the only one stupid enough to be out here running in this downpour.

I’m the only one outside running in this downpour. I finally have a place of solitude all to myself.

Instead of Telling Myself:

It’s starting to monsoon. I’m getting soaked. Someone get me a poncho.

It’s starting to monsoon. I’m getting soaked. Not only will people think your shirt is wet because of your dedication to fitness but also the extra weight of you shirt being drenched with water may have additional benefits to your cardiovascular health as it acts as an inexpensive weight vest.

The first mindset pushes you closer to defeat.  The second opens your up to a whole new realm of possibilities.  I ended up finishing those 4.5 miles without a hitch…at an 8:10/mile pace no less!  That’s a far cry from the 10+min/mile pace I ran last time I tried anything close to 5 miles.

Lesson learned. If I find myself resenting obstacles when they present themselves [and they always present themselves], I usually end up tripping, stumbling, quitting and ultimately failing.  But, when I embrace them, I’m often surprised by how often I adapt, learn, grow and eventually succeed.

Embrace the obstacles.  Run through the rain.