You are here: Home / Adventures / Say Yes To More Adventure

I just got back from 10 days in the Seychelles on a round trip flight to the other side of the world for less than $500.

It was the first pure fun trip I’ve gone on in a while and one of the best in recent memory (although it was exactly 12 time zones away and has left me quite thrown off as far as time zones are concerned).

However, the beaches and the water made up for that (as you can see below).

Captain America is taking a break from saving the world and going incognito complete with sunglasses and cuban straw hat in search of some waves. #beachday

This deserves a "hat tip" #islandlife

Bike rides at sunset on the north / west side of La Digue gives you views like this.

As I was talking with my editor before taking off for the trip, he mentioned to me:

“I want to know how you do that”

So in this blog post. I will detail exactly how I did it.

And it’s a lot easier than you think.

I was back in Chicago on Christmas day and while cruising Twitter I came across a deal for some ridiculous fares to Abu Dhabi, Hong Kong, Johannesburg, Mumbai, Seychelles and more on Etihad Airways.

I immediately freaked out and booked a trip to Abu Dhabi with my brother in September. I started looking at other fares and saw they were disappearing quickly (Hong Kong was already gone) and saw one to Seychelles.

I saw beach photos next to the location name and booked a couple tickets there with my best friend.

What happened next could have been a class in human psychology.

Ask anyone what they would like to do more of and “travel” is most likely in their top 5.

Ask those same people what their #1 reason for not doing it more and they’ll most likely say “money” (followed up quickly by “time”).

Since this deal had to do with travel and the fares were incredible inexpensive ($200-$500 tops), I figured everybody would jump in.

Instead, I got a ton of questions:

One booked a trip to Mumbai. Another to Jo-burg, but my favorite was my buddy Alvin who called me up and tried to get me to book a ticket for him (while texting me his passport and other details) because he was en-route to Brazil and the deals weren’t showing up on his phone.

His quote to me exactly was:

I don’t care where it is. If it’s less than $500 and sometime in February or March – just book it.

He didn’t care, he just wanted to go an an adventure (definitely in the spirit of adventure roulette).

Adventure was out there and he was going to find it, even if he had to get someone else to book the ticket for him.

However, the majority of people I talked to took the opposite approach & asked questions first.

Of all the people that asked the in-depth detailed questions, no one booked a ticket.

It’s the same thing that happens with bungee jumping. The only people who don’t jump are the ones who constantly look over the edge and worry about what happens.

With most adventures in life, you won’t get all the information you want until after you decide to jump.

The Rules I Used While Booking The Flight

When getting ready to book the flight, I already knew a few things:

So, in my mind, the potential outcomes worked something like this:

I buy the ticket and it’s cancelled.

I buy the ticket, the airline refuses to honor it and there’s a big social media uproar / pr nightmare for the airline.

I get to hang out in Seychelles for 10 days for a couple hundred bucks.

Now admittedly, some people are better trip planners than I am. Since I knew I was low on time and that this deal could expire at any time, my pre-trip planning involved:

3) Googling “where is seychelles”

(For the record: it’s in the middle of the indian ocean off the coast of Africa if you’re curious). 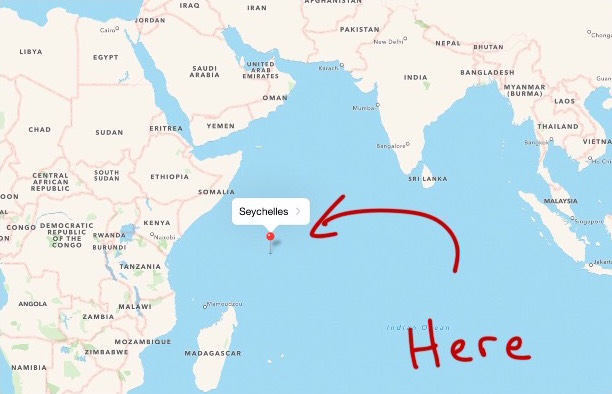 Now, I could have spent a lot of time asking the same questions that everyone else did, but one value decision that I’ve made in my life is to adventure for the sake of adventure. Get out and explore to see new things.

I decided a long time ago that I’m going to say yes to opportunities when they show up and the the number one thing you have to do in order to have more adventure is to say “yes” when the opportunity knocks.

And it’s knocking all the time.

Sure, sometimes you have to do stuff solo – people say no – or have to back out – but in that case, you get to still go on an amazing adventure and meet some friends along the way (who are also conveniently into adventuring – since they’re already there). You get an amazing story and you start to become more likely to do it more in the future.

If you want to adventure more, say yes when it knocks.

While this specific opportunity is over, if you’re looking for more opportunities for adventure, they’re available all the time.

Nathan just posted one this morning:

If you live in Europe this flight deal is amazing (and probably won't be around for much longer): http://t.co/BNQTsXjHtR

If you want consistent deals on great adventures, check out the following links. They should help:

Footnote: I realize that booking a last minute trip to literally halfway across the world is not for everyone, but if you need to take baby steps into this arena, consider a weekend adventure roulette. It might be the first little trip you need to break yourself in.