You are here: Home / Adventures / Silos, Ladders, and the First Step 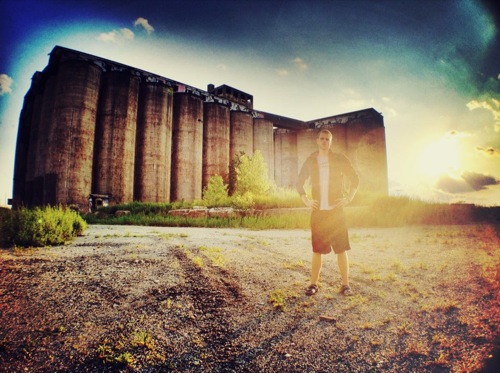 Last week, we did the first photo shoot since we launched Impossible HQ. I’ve been in the midst of an incredible fitness regimen as I knock another thing off my impossible list so we decided to do a fitness shoot to celebrate. The focus is “no excuses, no equipment, just results” so we wanted to find an empty warehouse to reflect those themes throughout the shoot.

Over the last few weeks, I searched for abandoned warehouses and buildings where we could do one. It took me a while, but I found one…100-150 feet up in the air – on top of the grain silos pictured above. Somehow I convinced Jeff and Marla at six4eleven to climb up over 100 feet vertically on a 100 year old ladder and get to the top to do the shoot (apparently I’m all sorts of persuasive). That was the easy part. We spent the next few hours exploring, working out and taking some photos for the shoot – it all went spectacularly.

Then we had to come down…

To get back down, you have to lower yourself through the manhole onto the ladder in the middle of the silo. Coming up, it isn’t too hard, you sort of just walk your way up, but coming down is an entirely different story. You can’t quite  just sit down and reach the ladder with your feet – you have to stretch out and lower yourself down without any rail, handle or rung to hold on to other than the manhole you’re going through. And while you can almost reach the ladder, there’s a split second – where you have to let go of the floor and the manhole and whatever you’re holding onto and grab the ladder.

It’s probably less than a 1/4 of a second, but it seems like forever – where you leave your current position of comfort on the concrete slab 150 feet in the air and take a leap of faith and hope you grab on to the ladder rather than falling to your death. It doesn’t matter how short that split second actually lasts, all you know is that it’s full of terror and it seems like forever. So you spend a lot of time looking at the ladder, contemplating the possibilities…

And then you go – and as let go, it’s terrifying…absolutely terrifying…

…until you grab the ladder.

Then it’s only slightly terrifying. You’re no longer “safe” on your platform and you’re not “safe” on the ground yet, but at least you have a path to follow – a guide to get down. And instead of worrying about dying and smashing into a thousand little Joel-pieces, you focus on climbing the ladder – rung by rung. Step by step. Action after action. Instead of climbing a 100 foot ladder, you’re climbing a 1 foot rung – 100 times. 1 rung at a time.

And it’s not so scary. It’s not so impossible. You climb down the ladder and you do it.

But no matter how many times you do it, that first step is always scary. Always. Whether you’re jumping off a bridge, taking cold showers or climbing down a ladder after a photoshoot at a 100 year old abandoned building – that little terror is there. Always. It can get easier, but it’s still always there. And that’s a good thing – because the presence of fear allows you to become courageous and overcome it.

“Courage is the complement of fear. A man who is fearless cannot be courageous [He is also a fool.].” – Robert Heinlein

As you test your limits, you start to see that same fear everywhere. That same reflex mechanism, that same part of your brain, that same resistance trying to stop you from what you want to do. You can’t stop it – but you can train it to recognize that stupid little fear that keeps you from climbing and doing the things you want to do. You can learn to become courageous, overcome it consistently and never let it stop you from doing something you need to do.

That first step is always the toughest, but it’s also the most important so take as much time as you need – but take it.

If you want to make that first step and get “unstuck”, Cold Shower Therapy can help you do just that. Registration closes tonight at midnight PST. After that, we close it down and CST starts Friday. #BOOM

photo credit: Jeff Sarris on his iPhone. Seriously, if you need photography done, check out six4eleven. They’ll climb 100 foot ladders and risk smashing into little-six4eleven-pieces for you to get the right shot :). Oh, and the photos from the shoot are coming soon.