For the last 3 months I’ve been quiet on the personal challenge front. It’s not because I haven’t been doing anything – in fact I’ve been rather busy – but I’ve been working on something that’s taken a ton of focus. Fortunately, it’s finally time for me to share.

When I first started the list, one of the first things on it was

Get a six pack and do a photo shoot to celebrate

It’s always been a little weird to have on the list as it’s unapologetically vain but, it’s something I’ve always wanted to do. When I started a few years ago, I used to be cautious about going after it. I tried it a few times, and never really committed myself to it and was never successful. In my years as an athlete, I had gotten close and even gotten in really good shape, but was never actually able to get that elusive six pack. It was one of those things that I didn’t know if I could actually do or not – I figured genetics just didn’t have it in the cards for me.

That all changed after a St. Patrick’s day conversation with Vic at SxSw, I decided to go for it again – a good 2 years after first putting it on my list. To make sure I was committed, I kickstarted it with my own edition of cold shower therapy, got a killer fitness coach and focused on this goal solely for the next 8 weeks. Considering I was traveling at the time in the Dominican Republic, the workout program that we developed had 3 rules:

I turned my intensity and focus onto my diet and over the next 8 weeks, I lost 34 pounds, dropped to 5.4% body fat and finally got the ever elusive six pack abs I always thought was impossible. I did this in 8 weeks, never visiting a gym and using nothing but a jump rope and body weight exercises you can do anywhere in the world.

These are the results. 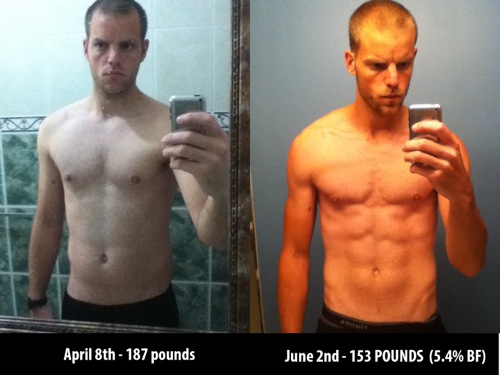 (The lighting differential is from the two different mirrors I took the photos in).

I’ll share more about exactly how I did this next week (sign up for updates here), but after 8 weeks of dedicated focus, I finally crossed it off my list.

But I wasn’t done…

The second part of the goal was to do a photo shoot to celebrate. As it turned out this was the hard part.

In order to reflect the fitness regimen that we developed, I wanted to find an old warehouse or abandoned warehouse for the photo shoot. The idea being that even if you had no equipment and were stuck in this building with nothing but your jump rope, you could still do all the workouts you need in order to get into incredible shape.

After searching for a bit, we found a location just outside Chicago. It was old, abandoned, had incredible graffitti and had the warehouse feel I was looking for.

Somehow I convinced Jeff and Marla to do a photoshoot at said location – sight unseen. They agreed immediately (I think they trust me a little *too* much).

They didn’t realize The fun thing about the shoot was that we shot it at the top of the building – 150 feet in the air or so. It wouldn’t be too big of a deal if we had the useful things like stairs or a lift elevator, but the location had been abandoned for 30 years or so and scrappers have long since taken the stairs to sell for cash. This left one route to get to the top – a rickety old ladder that  creaked half way through, reminding you of your untimely meeting with death if you freak out, slip or just get tired.

There’s no good way to actually describe how tall this ladder was silos actually were, how brittle this ladder seems and how intense the entire experience actually getting to the shoot location was, but it was totally worth it. The photos speak for themselves.

This entire experience was the most intense and one of the hardest things I’ve ever done in my life – due to the 8 weeks of focus and intensity involved in the diet and workouts – not to mention the last few days of incredible self-control, combined with water manipulation, scouting and actual preparation for the photo shoot.

I used to think that certain physical aspects of fitness was all genetics, and that average people like me could never get abs. Over 8 weeks, I realized that not only is that not true, but there’s an exact formula for doing it. It’s not quick and easy, but it is simple and possible if you know how to do it and are willing to put in the work. There’s a blueprint and it works. Hint: it involves fasting.

In the mean time, it’s time to knock another thing off the list:

Get a six pack and do a photo shoot to celebrate.