You are here: Home / Fitness / How To Cure Insomnia: 5 Experiments for Better Sleep

I have an ongoing battle with sleep.

For a long time, I simply hated it. Lying unconscious for 8 hours at at time seemed unproductive and boring.

I would lay there, staring at the ceiling for an hour before getting bored and getting up to work on a project or something else that seemed like it was more productive to society.

The aftereffects of this were that I would stay up to strange hours, crash out late, wake up late and feel groggy for the first couple hours afterward.

Then the cycle would repeat. I would be on a completely different sleep schedule than the rest of the world, miss meetings and be completely unreliable.

So, reluctantly, over the last year, I’ve come to terms with the fact that recovery – specifically mobility and rest – are 1000% necessary if I want to do the things I want to do (run marathons, push my limits and get stronger).

With that in mind, I’ve decided to begin experimenting with various ways to sleep better.

Here’s a few the things I’ve been trying out lately:

I’m not very much into supplements. I don’t touch any drugs (beyond caffeine and alcohol) and don’t even like to look at Tylenol or other things that most people consider mild, everyday OTC drugs.

So, when it came to a supplement related to sleep, I had my reservations. However, my past experience with Onnit and Alpha Brain made me curious enough to dive into it more and check it out.

While I don’t use it every night, New Mood has helped me relax, especially on those nights where I have a real hard time shutting off my brain.

It’s not harsh and it’s not a sleeping pill. The 3 active ingredients are:

I’ve found that, on occasion, it helps me relax.

I don’t think you need to take it every night, but if you’re looking for something to help calm you down at night, it’s worth experimenting with.

Have you tried @docparsley Sleep Cocktail yet? Use robbwolf as promo code and save 5% http://t.co/qyY7nV015m

There were a few obstacles to overcome – mainly the name – Sleep Cocktail, which sounds like the Kool-aid Jon Jones tells you to drink so that the aliens will come pick you up.

Again, I was pretty reluctant to try this out, but I was in an experimenting mood and have benefited a lot from Robb’s advice on paleo in the past (and was impressed by Doc Parsley’s talks at PaleoFX), so I decided to give it a go. 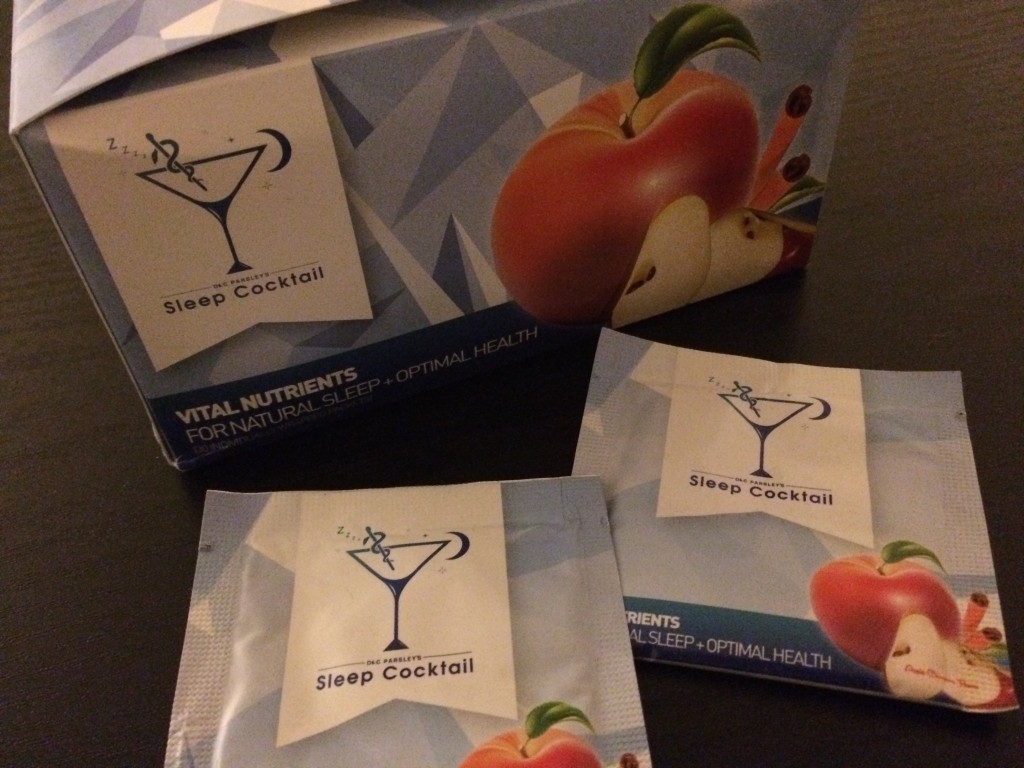 After digging into it a bit deeper, despite the name “cocktail”, the ingredient list is pretty mild and includes:

I’ve found that this works very well for me.

20 minutes before I go to bed, I drink this. It sort of tastes like apple cider and after doing an evening wind-down routine, you’re ready for sleep.

What I do like about this is that it’s not nearly as harsh as other similar things that I’ve tried. Because it’s not a drug or sleeping pill, you don’t really get a lot of the problems people typically associate with those categories of drugs (weird dreams, drowsiness, addiction). That said, it does help accelerate the natural process.

That said, I do try my best to do an evening stretching routine. It’s nothing special – it typically involves rolling out my quads and hip flexors along with my hamstrings and then putting my legs up against the wall:

Legs up against the wall after a long day of travel with @jennysansouci. Makes a WORLD of difference when you're traveling (especially on long haul flights). Part of an airport #mobility workout video I shot while hanging out in the Hamburg Airport. Full video and previews coming as soon as I get wifi and can upload it. ————————————————– May make this a routine in the @movewellapp for v2 if you guys are interested. ————————————————–Also, #thighsfordays – you're welcome.

It’s hard to not calm down when you’re lying on your back with your legs in the air like a kid. Besides being probably the most underrated thing you can do to improve your athleticism and recovery, mobility work has also become a good way for me to become mindful of both my body and my muscles as I (try to) let go of the stress of the day.

It’s become so helpful, we’re going to be adding an evening stretching routine to MoveWell very soon (along with a bunch of other very cool updates coming soon) – so stay tuned for that.

Disclaimer: I suck at this.

I’m really no good at all – I know the point of meditation isn’t to grade yourself, but that just shows you how bad I am at it 🙂

That said, I’m trying to suck less at it.

I’ve been working on using Headspace to do short, 10–15 minute meditaions before I fall asleep. I download the latest one, hop on my induction mat (more on this next) and do my best to concentrate as I lie down (truth be told, I doze off on a regular basis).

I’ve tried to make the habit of doing this (and while I”m not perfect at it), I’ve found that adding it to my routine does help from a “ritual” point of view.

I’ve been alluding to it throughout the entire post, but this might be my favorite sleep tool yet.

The research is a bit here and there, but my personal experience has been overwhelmingly positive.

I don’t mean it lightly when I say that this has been the single most impactful tool for my sleep habits that I’ve ever tried. I’ve literally never had 1 thing make such a big impact on my actual sleep habits and sleep quality as this.

The best way I know how to describe it is that I typically have trouble turning the lights off in my head (metaphorically). My brain just keeps running at full steam until I’m completely exhausted and the power goes out.

The sleep induction mat has helped me calm my mind down, “dim the lights” (if you will), and slowly ease into sleep.

It’s not immediate and it’s not harsh, but it actually helps my body and my mind chill the heck out, which is much harder than it sounds.

The mats are pretty simple, they’re just a piece of fabric with a bunch of plastic pieces with “pokes” that act as low-grade acupuncture devices.

My new favorite tool: the sleep induction mat from @bulletproofexec. It's basically a mat bunch of small button "pokes". It's basically like a low-grade acupuncture that relieves a bunch of pressure points and relaxes you before you drift off to sleep. I was super skeptical of this, but it's the real deal. I've had better sleep the last two nights with it than I've had in months (sleep is a real problem for me). And the pressure points don't nearly hurt as much as you think they would. Thanks to @jennysansouci for the gift! 😀 #sleep #bulletproof

When you first lie down on it, it hurts like a mother!

I find that in the first 5 minutes, I’m pretty conscious of everything, but over the next 10-15 minutes, I slowly get more sleepy. Then, after about 15–20 total minutes, as I’m about to fall into deep sleep, I’ll roll off the mat and continue sleeping. Sometimes though, I’ll find that I’ve drifted off to sleep for an hour or more on it without knowing.

I was about as skeptical as anyone about this (a mat with pokes that costs $60?!), but I’ve become a huge fan over the past couple of months with this – going so far as to pack this with me on my trips to Bangkok, Chiang Mai, Boston, Chicago, New York, Vancouver and more.

Considering that I don’t take more than 2 carry-ons on any of my trips (and the fact that the mat takes up a decent amount of room), that’s saying something right there.

The fact that you’re not physically taking something in and just laying down on it is also appealing if you’re sensitive to anything like that.

In fact, I like this mat so much sometimes I’ll just lay down on it to relax even if I’m not tired.

If you only try one thing on this list, I would HIGHLY recommend you try this out. It might change your life.

I wanted to include a couple extra bonuses. They’re not earth shattering, but if you want to continue to try to optimize your sleep, you should know about these 2.

As I mentioned above, melatonin is naturally produced in your body according to your internal circadian rhythm. You can take melatonin as a supplement to aid in this. I’ve tried this on and off on it’s own. I’ve had mixed results and nothing really conclusive to make me want to use it regularly on an ongoing basis. I’d rather just use my mat and do stretches than take melatonin (for the effect that it has on me). Your mileage may vary.

Hi, my name is Joel and I’m a screen addict.

If you’re like me, there’s a screen everywhere – your phone, laptop, tv, iPad. The best thing to do is completely rid yourself of them, stop using them for an hour before bed and leave all screens outside your bedroom.

That said, if you either can’t do that (or have a problem with people telling you what to do – like me), you can try out Blue Blocker sunglasses. Essentially, these awesome looking sunglasses filter out blue light and keep it from hitting your eyes. Blue light inhibits the production of melatonin (mentioned above) and can mess up your sleep cycles.

When I’m home, I bust these out and I do notice a difference in how the screens affect me. However, I’ve found I break these almost every time I travel with them, so you might need to get a few pairs if you’re on the road a lot.

As an alternative, you can download flux on your various computing devices, which does the same thing as Blue Blockers, but doesn’t require actual glasses.

Those are a few sleep experiments I’ve found helpful. What else am I leaving off? What experiments should I try next? Let me know and I’ll go guinea pig them out 🙂