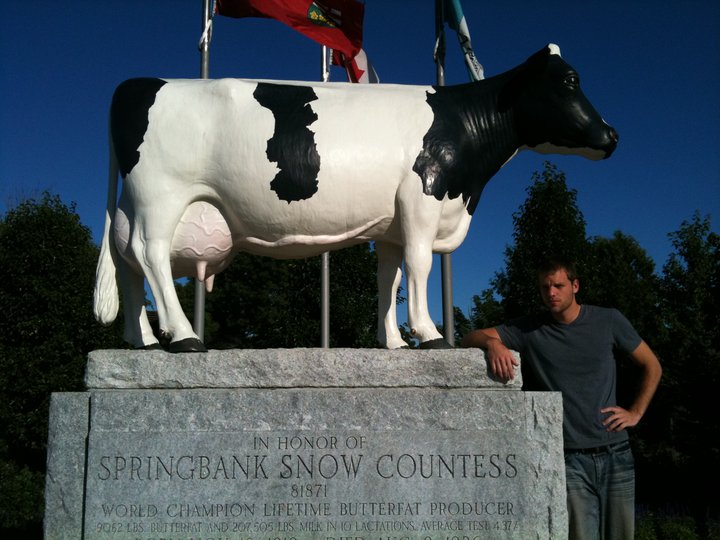 Hello from Woodstock – the dairy capital of Canada. I’m a little over 4,000 miles total into my road trip and I’ve been to both the Mexican and Canadian borders so far and I’ll be enjoying the Canadian snow and ice for the next few days – turns out it’s a little colder in Canada in January than it is when I last visited in August. Back then, I was able to snap a photo with Woodstock’s pride & joy – the SpringBank Snow Countess – the World Champion Lifetime Butterfat Producer. Impressive, eh?

You’re a smart reader so you probably noticed the innate irony in the first statement. You also probably noticed how much better the second statement sounds. Why? It has 2 very specific numbers relating to the statement rather than just generally glossing over an widely accepted fact or thought.

Staying with the dairy theme consistent with Woodstock, Canada which of these two sentences sounds better?

Once again, specificity wins out. Heck, even if you don’t care about dairy, farming, or cows [I don’t], the specificity of the statement makes it impressive.

I’ve talked about being specific a lot before, but I’ve still been vague about my plans this year. It’s time to change that. You’ll notice under my “Upcoming Impossible Things” on my sidebar, I’ve changed a few things:

Saying “I want to do x” by the end of 2011 is easy. Doing it is harder. Being specific with your timeline gives you an end date. It’s a lot harder for met to put off running when I know that on May 15, I’m going to have to run 26.2 miles whether I’m ready for it or not. I can either choose to do it and not be able to walk for a month, or choose to do it and be a somewhat functioning human being at the end of the day. Somewhat functioning seems much more appealing to me at this point, and having that date looming creates an urgency that means I’ll be going running as soon as I hit “publish” on this post.

Specificity matters and I’ll be sure to be more specific with my goals here at BIT concerning what exactly I will be doing and when I’ll be doing it by. What things do you need to start being specific about?