You are here: Home / The Impossible / The Uncommon Start To A New Year: Spectacular Failure 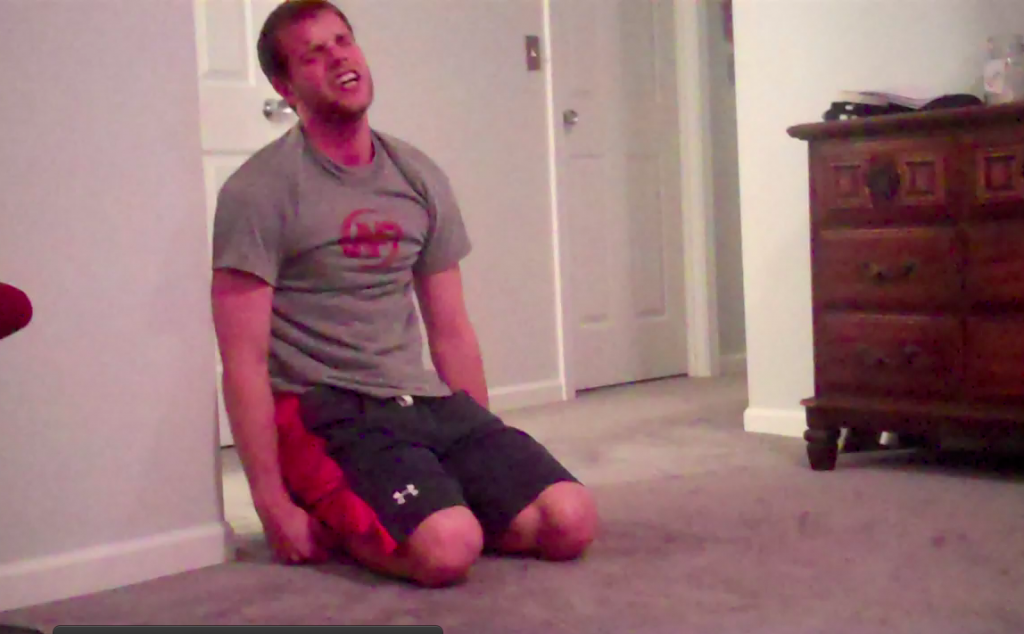 This is me in a lot of pain & very angry.

I’m starting the year off a bit differently than a lot of people in blog-land.

I’ve been saying for a while that I was going to do 100 pushups.

I WASN’T EVEN CLOSE.

In fact, I didn’t just fail – I failed spectacularly.

I announced the 100 pushup challenge along with my 200 squat challenge all the way back in August and I did a terrible job of keeping myself on track. The terrible excuse I have was that I was too busy getting ready for the olympic triathlon, so I didn’t finish either by the end of the month. 2 months later, I finally knocked out the squats in November, but the pushups were still kicking my butt [and still are].

I tried to do 100 a couple nights before the New Year and didn’t get close. I tried it again Jan 1st and hit the same wall. Then Jan 3rd [yesterday] came and I gave it one last shot. I tried 3 times in a row:

Done Laughing? Look at that for a second. Besides, none of those numbers being even close to 100, what looks “off?”

<<– Feel free to scroll down when you answer that question –>>

Here’s the stupid thing: I did more in the last set than I did in the first two! After kicking myself for about an hour, I figured out why I sucked so much.

Then I got mad. I knew I had cheated myself earlier by quitting so easily and was mad I had wasted so much energy on doing something half-assed.

A Confession [and a laugh for you]

I actually video taped this and was going to show it as the sequel to the very popular squat video. I was going to show everyone how awesome it was that I had actually done 100 pushups. It was going to be awesome. Instead, I ended up with something very different. It’s embarrassing, but I decided to share it anyways. Feel free to watch if you want to be amused [and hear my very encouraging sister cheer me on :)].

[If you’re reading this in an email, click here to watch it. I promise you’ll at least get a laugh]

Lots of people talk about failure and write inspirational crap about it while avoiding the messy act of failure as much as they can. They simply gloss over the bad parts: missed goals, bad launches, poorly written posts.

Good stories don’t happen in a vacuum and the best stories have a lot of ups and downs. Not everything is happy-happy-joy-joy all the time and the people you read about, look up to and do amazing things aren’t some other type of entity that are incapable of failing. They’re not superhuman and neither am I. Sorry to disappoint, but I’m very much human [which is total crap, because I’m even wearing my Nerd Fitness shirt in the video].

So here it is:

I failed. I missed a goal and to be honest, it wasn’t even close! It sucks. The closest I got was 69 and I’ll be the first to admit that these were ugly, terrible pushups that should barely be counted – please laugh at them, I already am.

I’m also more motivated than ever to make 100 pushups. I’m over 2/3 the way there and I know my quitting threshold has just been raised a whole lot higher than I had ever thought before. I know I’m not done until my body is completely shaking from trying to hold me up.

Screwing Up And Bouncing Back

I’m 4 days into the new year and I’ve already screwed up. Good. I got it out of the way. Better to screw up now and not have to worry about it the rest of the year than hoping that one day I’ll be “perfect”. I’m not going to be perfect–it’s just not going to happen. I can either accept that or live in la-la land where unicorns play with rainbows, and Joel is perfect.

100 pushups is really freakin’ hard. There’s no doubt about that, but I’m not quite sold yet that it’s impossible. Of course there is only one way to really find out…

I’m not done yet. I’ll be gearing up, working out and coming back for a round 2. There’s a sequel coming…You w0n’t want to miss it.

If you know of someone who would like to laugh at me doing pushups, go ahead and share this with them. I won’t be mad. In fact, you’ll actually be creating more motivation for me to get my butt in gear and make something impossible happen. Thanks.

If you sat and counted and you number varies, I took the number from my official “counter”, I didn’t actually check myself. Please correct me if I’m off.