You are here: Home / Fitness / How To Stop Being So Freaking Lazy 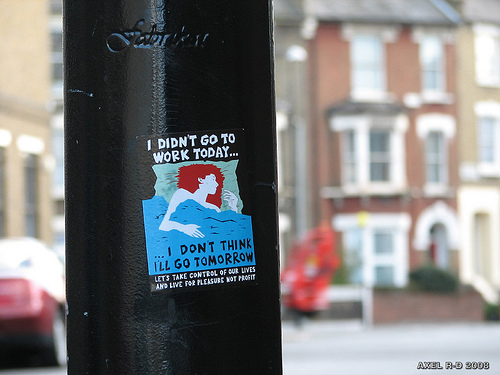 The last 8 weeks have been tough. I’ve been on a workout regimen I’ll be sharing soon that’s been kicking my butt but getting pretty awesome results (which I’ll also be sharing soon). But last week, I hit a wall.

I was tired, annoyed and a little sick of working out. I didn’t want to do it. Not because I couldn’t do it, but because I was being stubborn, I was making excuses. I was being lazy. It was simply easier to sit around and tap my keyboard for a few more minutes than it was to go get a workout in.

I spent a good 3 hours convincing myself that I deserved to take a break – that I was too tired, that one day off wouldn’t matter, that [insert terrible reason here] was a good enough excuses that I didn’t need to Meanwhile, I was only using up more and more of my energy and getting more and more agitated.

It was simple: I was being lazy. Lazy, whining and complaining. Not a good combination.

After a while, I realized that I was just whining and nobody cared about my excuses but me, so after 3+ hours of talking myself out of working out, I sucked it up, went to the basement and knocked out a 30 minute workout. It wasn’t the best workout I’ve done in my life, but it was enough to smash through the laziness barrier in front of me and keep moving forward – even if it just was a little bit.

Laziness is always around – sometimes it creeps up on you and other times you get so used to it that it becomes a habit. If you need help breaking out of that habit, here’s how to stop being so freaking lazy:

Want Something Worth Working For

You have to want something. If all you want is that donut in front of your face and the next episode of Jersey Shore, that’s all you’re going to get and you’re going to keep doing the things you’ve always done.

If your life story is boring – change it. But in order to do that, you have to want something actually worth changing for.

Run a marathon, buy a round the world ticket, run a triathlon, quit your job, pick up a new hobby, start your own business,

Start doing something you’ve always wanted to do.

Find something worth getting yourself off your butt – otherwise you won’t have anything compelling to actually change things – then go do it.

If you want to start, but keep puttting it off – set a timer. Give yourself 30 seconds, 1 minute, whatever you need, but set a timer. When the time goes off START.

If you find yourself taking breaks and your minute breaks turning into hours and days, set a timer. When it goes off, pick back up where you left off. No excuses. No self-talk telling yourself why you deserve a break.  No reasoning that you need to take a drink of water. If you’re rested, motivated, or encouraged enough to rationalize your way out of doing something tough, you’re rested, motivated and encouraged enough to go and do it.

Set a timer. When it goes off, stand up, go do something. Period. Set a timer and use it.

(This one technique works 100% of the time if you actually follow through with it).

Get someone on the phone and tell them what you want to do. Then go do it. If you don’t do it, have them call you out, get you back on track or punch you in the face (okay, maybe just a good wakeup slap). Find someone that won’t let you get away with it and tell them that you expect that from them. Being nice, forgiving and empathetic over and over and over won’t help you get better – it will just keep you where you are. They’re great traits for a friend to have but a real friend will tell you what you need to hear – not just what you want to hear.

Tell someone and have them hold you accountable – even if it sucks for you in the short term.

Competitive? Make a bet. Put your money on the line.

If getting a friendly slap by a friend who cares isn’t an incentive to get started, maybe the prospect of losing a bunch of money will.

Want even more incentive? Make a big bet – one that’s physically painful to you if you lose ($5 bets don’t count – (rule of thumb: if you can forget about the bet in a week – it doesn’t work).

Make a bet that hurts if you lose. Then don’t lose.

Having trouble staying accountable? Join a group of people who are trying to do similar things. The brand new Impossible League community is a pretty awesome resource (if I do say so myself).

There’s a lot of . Sometimes you need to do something and ust do it. It doens’t have to be pretty, you just need to do it. Get out your pen, write it down and then throw it away. Go do your workout – do it terribly – but do it. Stop waiting for the perfect business plan to fall in your lap and just find one customer.

Slow motion is better than no motion.

Inaction leads to more inaction, so keep moving forward – even if you can’t do it perfectly. Even if it sucks at first – because sometimes you need to suck at something first in order to get better. Over time you can make it suck less and then even less. If you keep at it, you might eventually get it to be mediocre!

Don’t make a habit of creating junk, but if perfection is holding you back from moving forward and keeping you stuck, throw it out the window and just start already. You can be prolific, create a bunch of rough prototypes and then perfect them.

Shock yourself into doing something. Do something tougher than the impossible. Take 30 days of cold showers. Once you take a cold shower, it’s hard to sit back, relax and just take a  nap or veg out. After a 5-minute cold shower you feel like actually doing something, moving and making something happen. Plus it makes it easier to recognize that the resistance that’s keeping you from doing something is all in your head.

Step it up. Lazy happens when you’re uninspired – when there’s nothing to do. When you pick easy targets and predisqualify yourself from anything really challenging or interesting, there’s no reason for you to push yourself. If everything seems possible, there’s nothing really pushing you to do more.

Somewhere along the line things got too easy.

It sounds counterintuitive, but if it’s all too simple for you, there’s no incentive to keep getting better and to keep improving.

Step it up. Do something hard. Do something so hard it might even be impossible for you to actually do. Then set out to do it and you’ll magically find out that being lazy isn’t much of a choice anymore.

Get off your butt. Stop wishing and start doing.

The sooner you stop waiting for it to happen and start making it happen, the sooner it will actually happen.

How do you cut through the crap when all you feel like doing is lying around and stop being so lazy?

If you’re seriously having trouble doing the things you really want to in life, you should consider joining cold shower therapy which is launching tomorrow.  It’s a email challenge course designed to shock you into action and cut through the B.S. excuses that you’ve convinced yourself are valid. It’s launching tomorrow.