You are here: Home / Hacks / How To Really Write About Stuff That Matters 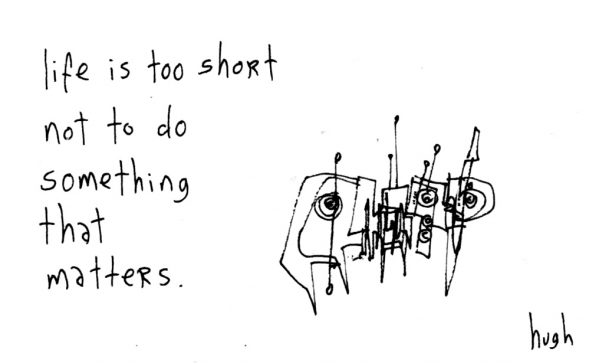 Write about stuff that matters.

That piece of “blogging advice” has been going around for the last few months and unfortunately, like most blogging advice, it’s repeated, retweeted and passed on and on by twitter drones without much thought other than “I liked it because it was written by someone I think I should like.”

If you haven’t heard what I’m talking about, the advice goes something like this, “Write about stuff that matters, gain an audience, profit.”

It’s not terrible advice, but all it is doing is advocating more talking and if there’s one thing we don’t need, it’s more talking. There’s an endless supply of talking [especially in the blogosphere], but the number of people actually doing something significant is a lot smaller and there’s a very good reason for that. Writing, talking and planning are easy. Doing is hard.

What if instead of just writing about “stuff that matters”, you actually did something that mattered? The first time I ever met Chris Guillebeau, I almost peed my pants. After I realized he was a normal human being, we talked and afterward I sent him an email with the concept for the blog, my plans and what I had in mind. I wanted to stretch my boundaries, push my limits and do the impossible and I wanted to see what he thought of it. He responded in usual Chris Guillebeau fashion by being supportive and answering my questions, but it was the last piece of encouragement he wrote that had the most impact on me.

When’s the last time you’ve done something that matters? Something that’s meaningful? Chris is doing something meaningful. He’s traveling the world, but he’s also building wells for people in Africa who don’t have clean water. Last week he raised over $24,000 in 3 days for the AONC Charity Water project. That’s 5 wells and clean water for over 1,000 people [significant tip of the hat Karol & Adam for organizing the project].

I have a lot of things on my impossible list. Since Chris sent me that email back in April, I’ve been intentional about not only doing impossible things, but meaningful things. Whether that’s lending on kiva, or helping people doing stuff that matters by saying yes when I can, I intentionally seek out those opportunities.

Are you doing meaningful things? It’s a good question to ask yourself frequently. When’s the last time you:

If you just write about “stuff that matters”, but never actually do anything meaningful, what’s the point?

I’ve done a lot of free marketing consulting lately for some friends doing some awesome things. One is starting an awesome non-profit movement and one is creating a business model completely different from anything you’ve ever seen before.

Here’s a not-so-secret secret: I hate doing free consulting. It’s not because I don’t make any money on it [money isn’t an issue for me], but most of the time people just don’t care about something they haven’t monetarily invested in. There’s no buy-in. They talk all day, but they don’t do actually do anything.

So why do I have I been helping these guys out even though there’s nothing in it for me? Simple. These guys are doers and they’re doing stuff that matters.

They’re doing stuff that matters. What they’re doing is going to help people. These guys aren’t just talking, they’re doing. That’s why I offered help to them out.

If you need help with some meaningful work you’re working on, take me up on my yes policy, I’d be glad to see what I can do.

If this post helps you do something that matters, I’d love for you to share it with your friends wherever they happen to hang out. The world needs more people willing to do stuff that matters. As always, you can always sign up for updates via RSS [awesome] or join the gang of impossible doers on the best email newsletter in the universe and get updates direct to your inbox [even more awesome].