You are here: Home / Fitness / The Surprising Purpose of Pain

Most people want to avoid pain.

It’s uncomfortable, it hurts, and it’s not really fun.

Unfortunately, I’ve decided in my life, that I don’t get the luxury of avoiding pain.

Being an athlete, you’re constantly exposed to pain. It happens when you push the limits of what you’re capable of. Every time you decide to go farther, to do more, to do something you haven’t done before, you’re exposing yourself to pain. It’s tough to explain to someone who hasn’t experienced it before, but there are different “types” of pain. To the uninitiated, all pain sounds bad, but most athletes will tell you there’s an enormous difference in the type of pain they experience on a daily & weekly basis.

Ask any athlete you know & they’ll be able to articulate some differentiation between “good pain” & “bad pain.” 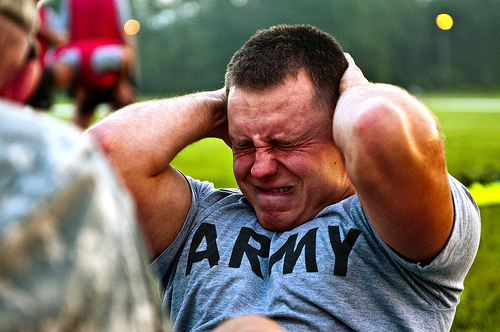 Good pain is how you feel after a workout that dominates you. Completely spent, incredibly sore and you do the awkward walk down the stairs post-squat day.

However, this pain also leads to growth. It’s a pain that leads to your muscles being broken down so they can be built up stronger. It’s a pain that makes you feel like you want to puke up your lungs so you can run faster next time. It’s the pain of transformation. The pain of getting better. Avoid this pain at your own peril & you’ll atrophy like a leg in a cast – never being used – and wasting away.

Bad pain is slightly different. It’s your body telling you that you’re going too far – that you’re not just bending – but you’re breaking and you should probably stop before hurting yourself.

Ignoring this pain leads to injuries, muscle tears, broken bones, and all other sorts of hurt. Not fun.

The Surprising Purpose With Pain

The problem with pain is that it’s not something you can tell the difference until you’re familiar with it. If you look at it from the distance, you’ll never be able to tell how they differ. The grimaces look the same, the effort looks agonized & from a third-party perspective, they both look bad.

Even if you decide to jump in and find out for yourself, when you first start out (in anything) – everything hurts – you’re convinced that you’re going to die. Everything seems like bad pain & your initial instincts are to run away from it all. It’s not until you do that thing over & over & over that you start to recognize what it “bad pain” truly feels like and what “good pain” is and how both of them aren’t nearly as bad as they sound.

Why Pain Isn’t As Bad As You Think It iS

Almost all pain leads to some sort of growth.

Good pain is good because it force yourself past your limits & breaks down your muscle. That hurts. But, it also lets your body recover & build it self back up to something stronger than it was before.

Both types of pain you can learn from.

Of course you can try to avoid all pain if you like – but if you do that, you’ll find that your growth will stagnate & you’ll be less effective over time. You’ll atrophy. But if you recognize the pain, embrace the suck and dive in – it might hurt for a while, but over time you’ll get stronger, faster and better.

You’ll also find that pain is just a sensation – it doesn’t last that long. Sure you might be sore after a workout – but that subsides in a day or two. That’s the whole point of CST – to teach you that some things in life (i.e. cold temperatures) are just temporary and that feeling cold won’t kill you – it will just be uncomfortable for a few minutes.

In fact if you’re not encountering pain on a regular basis, you’re probably not doing anything that’s actually pushing your limits very much – because pain happens when you bump up against your current limits.

The point: don’t be afraid of pain. It’s just a sensation – to let you know you’re pushing what you’re used to (what’s comfortable). Instead of running away every time you think something might hurt or might be hard – lean in instead & see how you can grow in the situation.

This whole post used athletes & fitness as examples – but you’re smart readers & can apply it to other parts of our life as well. Don’t be afraid of pain, lean into it – embrace it. It’s life’s way of offering you a chance to grow.