You are here: Home / Hacks / Take Your Seat 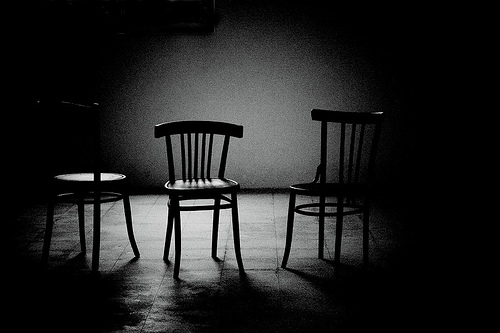 You walk into a room and everyone is sitting around a long dinner table. As you stand there, you look around the room and notice a lot of different faces there, familiar and unfamiliar, all sitting down. They’re laughing, eating, and having fun but you also see serious conversations and business deals happening. Everyone in general seems very comfortable with their surroundings and at ease with each other. You start to notice the faces of people sitting down.

And you…well you’re still standing there.

So you’re still standing. On the outside. By yourself.

You start to convince yourself you don’t fit in there. You think to yourself, “Everyone here knows what they’re talking about. They’re all so smart, so comfortable, so relaxed, so polished. I’m not so sure I should be here…”

And there’s that empty seat again…

You want to sit down, but you have a million questions running through your mind.

Then all your insecurities start to bubble up

You look back again…still empty.

The seat is still open…empty…waiting…

There’s a million chairs in life just waiting for you to sit down in them. Waiting for you to take your seat, act like you belong, and make a difference. The people at the table aren’t inviting you to join. They’re busy networking, conversing, hustling and making a difference. Most of them won’t be interested in how you feel, and don’t really care that you’re terrified.

But none of that matters

As long as you believe you won’t fit in, you won’t.

Assume you’ll fit in. Act like you belong, take that empty seat, sit your butt down and do something.

You’ll probably not be ready to do it.

And you’ll probably screw up somehow.

But the only person telling you not to sit down is you. The only doubts in the room are in your mind. The only missteps you’ve made so far are imaginary.

You can either stand there for eternity and imagine every possible bad scenario or you can take your seat, act like you belong and make your mark on the world.

The world’s waiting. Take your seat…because it won’t be empty forever.