You are here: Home / Adventures / The #1 Thing I Learned From 2nd Place In My First 10K 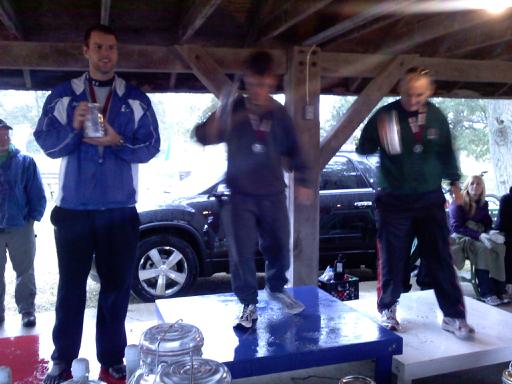 Incredibly Blurry Picture of Me on the Podium

Saturday morning I headed out at 4:45am. Unfortunately, due to equal parts bad navigation and poor marked signage, the short 1-hour drive turned into 2 1/2 as I turned myself around at least a dozen times. After some out-loud yelling at my car, I finally figured everything out and showed up to the race.

The main race going on for the weekend was a duathon [10k run, 40k bike, then another 10k run] and there were a few hundred people there for it. As the duathletes started to race, the number of people around shrank dramatically. About 5 minutes after the last heat of duathletes had left, they called all the 5k & 10k runners and walkers to the line

The 5k & 10k were going to be run together. As I got to the line, I was amazed at the numbers of people were lined up:

There was grand total of 16 of us for the race [easily the smallest race I’ve ever been in]. It was actually so small, it was comical. Everyone else was literally there for the duathlon. The race started with a canon shot, and one guy sprinted out ahead of everyone, but besides him, I was out in front of everyone. I ran the first couple miles with a guy named Walter, a 45 year old who started running 5 years ago and has since run 30+ marathons as well as a half-ironman. Talk about encouraging. About 2 miles in, I picked up my pace and about the half-way point of the 10k, I began to pass some duathletes who were pacing themselves [they still had a 40k bike & 10k bike after the initial run]. As I passed them, literally every one of them noticed I was wearing my Vibrams and yelled out some variation of “How do you feel about those Gorilla Shoes?!”

I tried to quickly mention the pros & cons of vibrams as best I could while running, but it was hard to focus on running and presenting a dual-sided argument for footwear apparel at the same time. I felt really good throughout the whole race and I finished in 53:40, an 8:40 pace, which I was pretty happy with. However, as soon as I finished, some of the people started to notice my Vibrams and the questions started again:

I answered their questions as best I could, but I was really surprised at their interest in them. The photographer even came over and took some close up photos of them.

Why You Should Care

Good for me, I finished another race and beat out 5 other people for 2nd place. Big deal. There was no one else there. Why does it matter? Who cares? 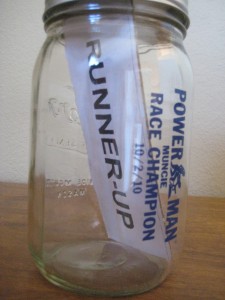 I know, believe me, I’m under no illusions that I’m a fast runner. Even though I’m really happy with my time considering the hilly course, I’m quite aware that an 8:40 pace isn’t going to grant you 2nd place in a lot of races. That said, if I get the chance to get up on a podium, you can bet I’m not gonna pass it up and all I did here was show up.

There’s a lot of people that could have run better times than me in that race, but only 1 person did. There are endless reasons why no one better showed: they weren’t interested, didn’t know, didn’t care, were too lazy, too busy, or just are all talk. But I showed up, I ran a decent race and I won second place [complete with canning jar with a piece of cardboard inside declaring me “runner up”]. Sometimes that’s all it takes. Sometimes all you have to do is show up.

I had quite a short list of reasons not to show up to this race. I’d never run a timed 10k before. I was running by myself. I knew I wasn’t going to run incredibly fast and I knew that there was no way that I was going to win any sort of awards[ha!]. I could have given up after driving around for 2 1/2 hours at 5am [and trust me, I almost did], or I could have just left when I saw the grand total of all 16 of us lined up at the starting line and decided it wasn’t worth it. But I went ahead, did it and I ended up on a podium.

That thing you want to give up on? The thing that seems stupid to even dream/try/finish?

Go ahead, dream it, try it, finish it. Who knows? It might just work because no one else has the guts/time/energy to try it.