You are here: Home / Hacks / The Best Part of Your Favorite Blog That You Never Bothered To Read 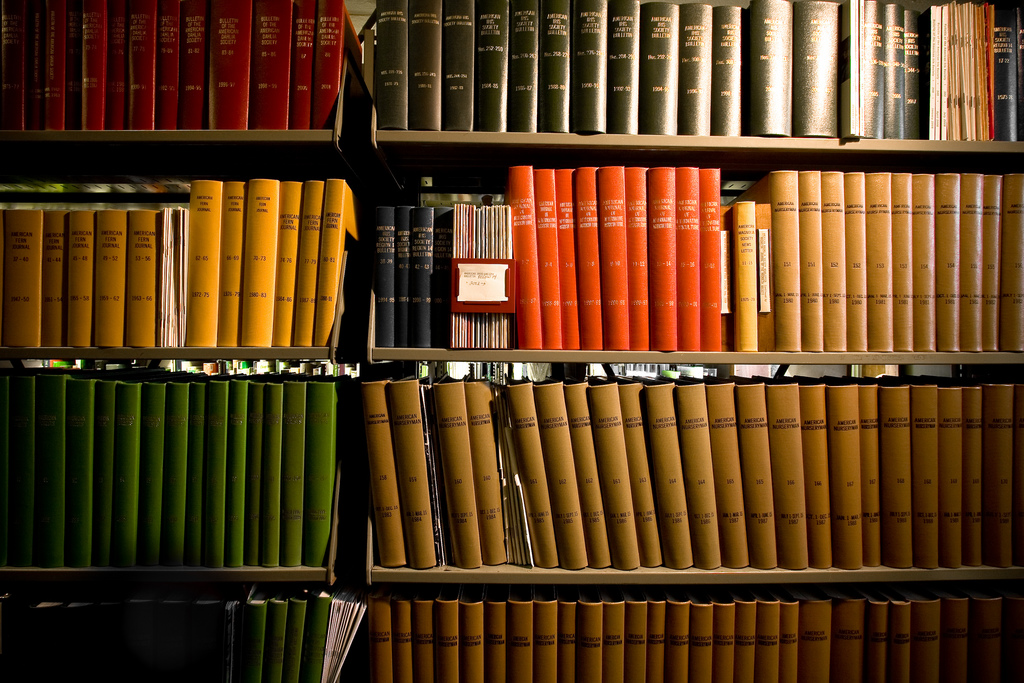 There’s an amazing part of every blog you read that you’re missing out on.

So what’s the best part of every blog that you’re missing out on?

Why Most People Don’t Read Them…

A huge number of people don’t both reading archives. Why?

Archives are messy. They’re not packaged neatly and sometimes difficult to find and/or navigate. There are spelling errors, outdated information and bad videos with guys breathing heavily into the microphone.

…And That’s Exactly Why They’re Important

Whether you like it or not, most all testimonials, memories, accounts or opinions are revisionist history. It’s how the person thinks NOW about how they felt THEN. We’re terrible at recalling exactly what happened. We’re involuntarily biased by our own current position in life. The archives are a way for you to tap into how they felt at that exact moment in time. The archives let

I’ve learned more from Chris Guillebeau than probably any other blogger. I’ve only met Chris once, since have only exchanged a handful of emails, but I’ve still learned an amazing amount about him and his strategy. How? By reading his archives.

I’ve spent countless hours looking through the archives of his blog and I’m constantly amazed at how his blog+travel-project+life concept is so seamlessly put together and executed. I couldn’t figure it out how he did it for the longest time and then I realized, there’s one reason why:

Take a look at these mind-maps Chris created at the start of AONC [thanks Chris for letting me use them here!]. 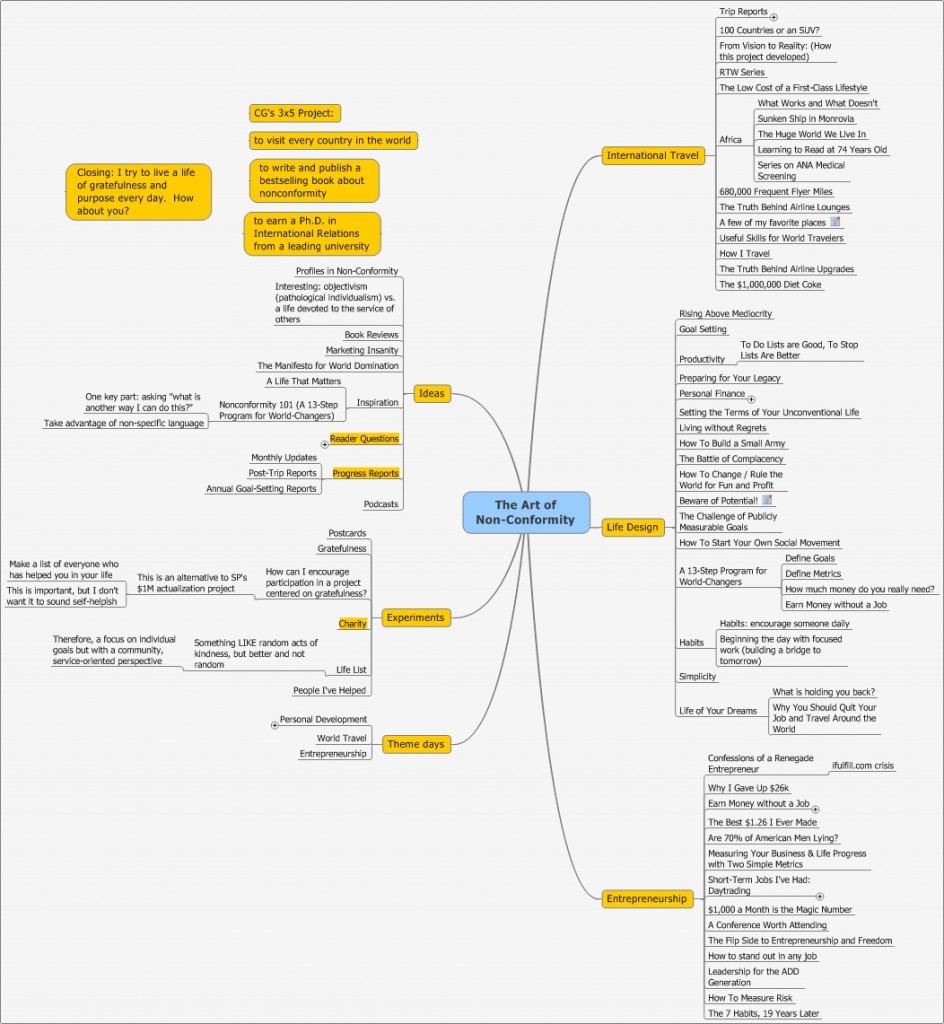 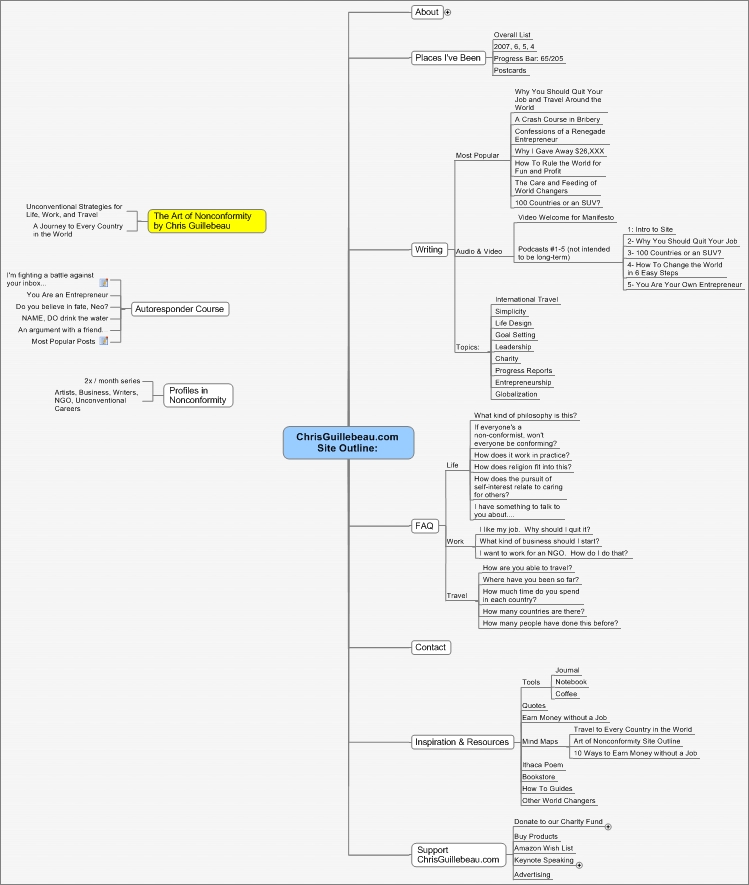 The detail in these is amazing and have been incredibly helpful in helping me form my own plans for world domination and doing of impossible things.

If you take the time to look through them mind-maps, you’ll see a some pretty ambitious plans for what was at that point, a 1 month-old blog. They say something about releasing a best-selling book, implementing a postcard project and a starting charity project under the AONC umbrella

Fast-forward to early January 2010; Chris announced his plans to raise $500,000 for an AONC charity project for Ethiopia through Charity Water. A month later he introduced an AONC postcard project soliciting postcards from people changing the world. Turns out, he’s also coming out with a book in a month. Coincidence? To the casual observer, it might look like Chris is just lucky and every project he rolls out is a success, but in reality, he was planning world domination from Day 1 [if you didn’t know, he’s getting pretty close]. His AONC archives are a living case study on how to live life intentionally and also build a blog, business and a charity initiative in the process. Even if you were reading Chris from the start, humans have a pretty short-term memory. It’s one thing to dream about creating change, but you really appreciate the end goal when you understand the full arc of the story. Reading the archives gives you that understanding and knowledge to plot things out yourself.

By now, I guess I’ve revealed my blogging-crush on Chris. Go read his archives now. Like I said, it’s a living case study on blogging [and it’s free] better than any eBook on blogging that you’ll find. Start with his first month of posts and make your way through it. It’s worth your time, guaranteed.

Watch Gary’s latest video on WineLibraryTV.com. Now watch his first video. See a difference? Gary went from an average guy talking on a bad video with bad lighting with his cameraman breathing directly into the camera into the rockstar of the wine world. Gary’s got four years [and counting] of videos documenting that progress. I dare you to watch them and NOT learn something.

There’s a ton of blogging gems that you’ve read before that might not have applied to you at that moment in time, but if you read them now, would impact you immensely. There are other posts that you read over and over again, others where you celebrate others victories and some that make you wonder “why can’t I dominate a triathlon?“

Sometimes the journey itself is an inspiration. I’ve talked about Sean Ogle a few times, but he’s a great example of a guy who just started blogging to just start blogging. He knew he wanted a life change, but didn’t necessarily know what that meant for him. Didn’t matter, he kept writing and made things happened.

Baker’s story, like Sean’s, is of evolution. I don’t think Adam would say he’s “arrived” by any means, but to see they journey he’s had since he started blogging a year and a half ago and is nothing short of awe-inspiring. Baker doesn’t have an archive page, but start here and work your way backwards.

Blogging gets hard. But when it does, you can bet that it’s not just hard for you. It’s hard for everyone at some point. You hit a dip, you get mad as hell, and you want to throw imaginary chairs against the wall. The only problem is, not everyone hits that point at the same time. The archives give you that ability to go relive those hard parts with those people you look up to. You also realize that amazing blogger you look up to, wasn’t always so big and that everyone hits a low point every now and then.

David is in a completely different stage of life than me. He’s married, has kids and everything he writes still manages to resonate with me. He’s incredibly honest & open about his life & adventure as he works on building out his new life. David doesn’t have a clean archive page either, but you can start here.