You are here: Home / Fitness / The Budget Guide To Triathlon

I hear that a lot.  And triathlons definitely can be. When you see professional triathletes decked out in gear and apparel that looks as foreign and expensive as a space suit, it can be intimidating. But, with most things, money is very seldom a good excuse for not doing something cool. If you really want to do something, you can usually find the money to make it happen or you can find a way to do it for less than you thought it would cost.

Running a triathlon doesn’t have to cost you an arm and a leg (which is good, because then you would be swimming in circles and hopping your way through the race which would be awkward at best). You can still run a triathlon and stay on a budget.

The Budget Guide To Triathlon

The Swim – What You Need 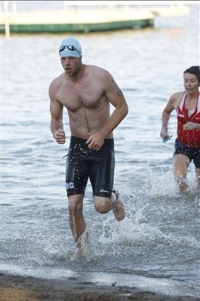 You already have this. You’re not going to want to wear your boardshorts though. They’ll slow you down a lot more than you think they will. Guys get a pair of compression shorts if you don’t already have one. They’ll run you $20. Yes, you’ll be standing around half naked with hundreds of strangers. It’s okay, there will be hundreds of half naked strangers standing around you. No one will care.

Most people have a pair of goggles lying around somewhere. If you don’t, you can pick one up for anywhere between $12 and $25. Once again, you don’t need anything fancy. Most goggles are pretty similar and you won’t be able to see through most of the water you’ll be swimming in anyways. Get a pair that are comfortable and start swimming.

The Bike – What You Need 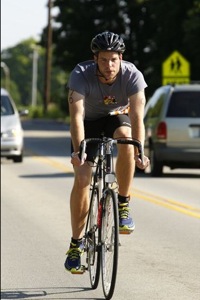 Bike’s can get ungodly expensive. Pro triathletes spend 5-10k on tricked out bikes with cool looking wheels and aero bars that are intense. Good news is, none of that is required. I did my first triathlon on a mountain bike I borrowed from my brother. That was not a good decision (mountain bikes are terribly difficult to ride). That said, you can borrow a bike from a friend. One of my buddies does one triathlon every year and still doesn’t have his own bike, he just keeps asking people to borrow theirs. That said, if you’d like to ride something on your own, there are tons of bikes to be had for $150. You just need to get creative, check the classifieds and be willing to put in some sweat equity.

You have to have this in most races or you’ll be disqualified. Also, this helps protect your head from smashing into little pieces all over the ground like pieces of watermelon. That’s a good thing. You can get a cheap helmet for $20. My first race, I borrowed my sister’s. No joke. Get something that covers your head and get on with training.

You can get really nice shoes that clip to your pedals . Chances are, if this is your first race, you don’t have clips, or pedals, or even a very nice bike. So you don’t probably don’t need clips either. I’ll be getting clips to bike with soon, but for my first year and a half of racing, I’ve used the same shoes I run in, to bike in. This saves you money and time on your T2 transition because you don’t have to get off your bike and change shoes. If you get serious about racing, you’ll eventually want to go ahead and get some nice clips, but for your first time out, don’t worry about it.

The Run – What You Need 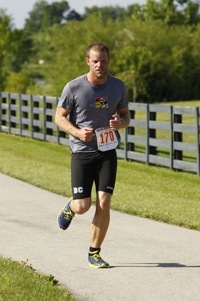 Running is simple. All you need is a good pair of shoes. And, if you’re a barefoot runner, you might not even need that. You might feel like throwing on a shirt or a pair of shorts but you don’t have to if you don’t want. I’ve seen people run in the same gear they swam in and at that point, you’ve run around half naked long enough to not really care whether you’re wearing a t-shirt or not.

You probably have running shoes all ready. If not, you can grab some off Eastbay for $30. You can spend $120 on a pair if you want to, but it won’t make you run faster. Find a pair that are comfortable, break them in and get running.

Don’t spend your life savings your first time out on a race you don’t even know if you’ll like yet. Try it out with base line stuff. It does not need to be top of the line gear. If you like racing, do more races and then get nicer stuff over time. If you don’t like it, then move on to the next challenge and feel good about not investing hundreds of dollars into something you tried one. But don’t worry if you don’t have the nicest stuff out there. Just get training. No one wants to be the guy who spend thousands on gear and is getting passed up by the guy on the $150 bike. If you make a choice between gear and training, choose training every single time. That’s how you do a triathlon on a budget.