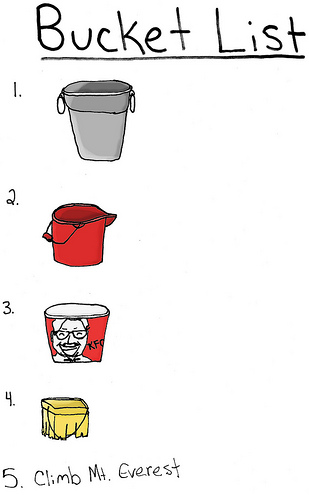 There’s a difference. Not just in the name, but in the entire concept.

Lots of people have a bucket list. They’re static things made up at one point in time that most people don’t end up actually incorporating into their lives and discard when things get tough.

I don’t have a problem with bucket lists. They’re probably better than nothing, but the worst part about a bucket list isn’t that it’s just a bucket list, but that it’s a just list. It’s a set of things waiting for you to check off. If you don’t get to them, you fail.

The impossible list is a good barometer for that.

If you’re getting bored with your life, it might be because it’s because you just have a list of things to do someday, instead of a list of things that you’re actively living out day to day in an attempt to live a life worth writing about.

It’s a fine line to walk so here’s a quick rundown of the differences between a bucket list and the impossible list.

A bucket list is a set of things you check off and hopefully you get to them all before you die. Slowly,but surely, if you’re dedicated you’ll eventually cross everything off your  list. The impossible list is different. The impossible list expands what you’re capable of doing. You should be constantly checking things off the list, but you should be adding items as well. With the impossible list, your limits expand, your horizons get bigger, your dreams become larger. You constantly check things off your list, and you realize that what’s literally impossible to you now is completely different than what you thought was impossible even just 3, 6, 12 months ago.

Most bucket lists serve as a highlight reel of life – a series of unrelated exciting accomplishments between which most of the time people are bored. The impossible list is a journey. The impossible list is a series of events, each building on each other in order to create a great story. Each list has a meaning and a purpose and the list expands and changes in order to tell a story of how you’ve grown, what you’ve overcome and how you’ve gotten to where you are from where you’re from. The check marks designate things accomplished, but the purpose is not to get to simply achieve specific accomplishments but to change in the process that occurs between those those events.

A bucket list is stuff people hope to do someday. “Maybe, one day when I get lots of money, I’ll do ‘X'”. The impossible list takes action today. It requires you sit your butt down, and go get stuff done. It’s not all pie in the sky and it won’t just happen if you think about it hard enough. It takes work and you have to actually do something in order to get there.

There’s a countdown for the bucket list out there. The time ends when you die. If you didn’t get to everything, too bad. You lose. Failure. The impossible list is different. It’s focused on challenging you to question what’s impossible right now, and pushing you to bigger and better things rather than being comfortable with the status quo. It forces you to constantly expand the sphere of what you believe is possible right now. A bucket list expires when you die. The impossible list is about what you’re aspiring to do right now…because that’s the only time you really have.

If this made you think, do me a favor and share it with someone in your circle of influence.

Also, if you want more of this be sure to subscribe via email. Besides getting regular updates in their inbox, email subscribers are getting a special invitation from me tomorrow (Wednesday, August 30th at 10pm CST) about how , so be sure to get on it.

Special thanks to Tim Dyer for helping me articulate a few of these thoughts.