You are here: Home / Adventures / The World Is Not As Scary As You Think It Is

Over the next month, I’ll be posting several articles on my recent trip to Jordan sponsored by the Jordan Tourism Board. These will be posting on Saturday’s in addition to all of our regularly scheduled content and will be focused on travel, adventure and living a better story. Enjoy.

I shot this video on in Aqaba, Jordan on the coast of the Red Sea. You can see Saudi Arabia, Jordan, Israel and Egypt all from where I’m standing.

The world is not as scary as you think it is.

After I stopped laughing at their foregone conclusion, I’d respond: “probably not.”

Of course I could die going to Jordan. I also could die crossing the street, walking the dog, and stuffing my face with pizza on the couch. You could die doing lots of things, but you probably won’t. Unfortunately, it’s an excuse that many people use to stay within their comfort zone and never venture out and do something interesting.

When I last checked, the death rate was hovering right around the 100% mark, so if you think jumping out of a plane, off a bridge, visiting new countries, finding the holy grail or spending 24 hours on mars is dangerous and going to kill you and should therefore be avoided, then you’re going to live a relatively uneventful life.

Sure, there are bad people doing bad things everywhere but thinking that bad people are in the majority anywhere you go, keeps you from enjoying the good people and the good things that actually are there.

While there are much more experienced travelers than myself that can attest to this, the truth is, once you start exploring the world, you realize that, contrary to what you might hear on the news, most people are good – no matter where they live, what language they speak or what beliefs they have – and

Adventure is defined by the unknown. It’s going places you haven’t gone before and doing things you haven’t done before. Sometimes that’s scary – but it’s seldom as scary as you think it will be or as other people tell you it will be. And, you probably won’t die. You might, but you probably won’t. But, if you never get out of your comfort zone and adventure, it’s all too easy to stay the same, never change and bore yourself to death.

If you’re not doing something that scares you every once in a while, you’re doing it wrong.

The world isn’t as scary as you think it is. And if you are scared of something, do it anyways – you probably won’t die. Do something hard, something that makes you nervous, something that’s scary. Because when you do it,  you’ll realize those scary things aren’t that scary at all and that being scared was the scariest part of all.

The world is not as scary as you think it is. Get out there and adventure. Jordan is a great place to start.

For the record, the most danger I ever found myself while in Jordan was snorkeling in the middle of the Red Sea, surrounded by legions of jellyfish who all were – oddly enough – not be poisonous. As evidence, see exhibit A below. 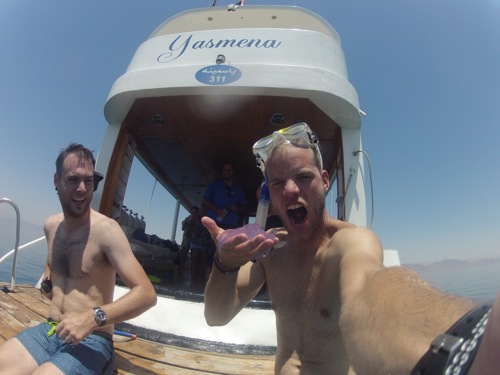 While the entire trip to Jordan was sponsored by JTB, all opinions within are completely mine.