The twitter message pretty much says it all. I finished and did pretty well, but I’ve been getting asked a lot about the results, so here’s the race recap. It’s sort of epic so here are some quick highlights to look forward to:

The swim was in the canal in downtown Indianapolis. Since it was a canal, we started off individually so there weren’t masses of people swimming simultaneously. This meant my personal media team (aka my sister & cousin) could walk along and take tons of videos of me flailing around, but the curves of the canal meant I was changing direction quite a bit, which is something I’ve never done before.

I was hoping to do this swim in the 10-11 minute range, but I feel a little short of that for a few reasons:

Cutting off the Competition 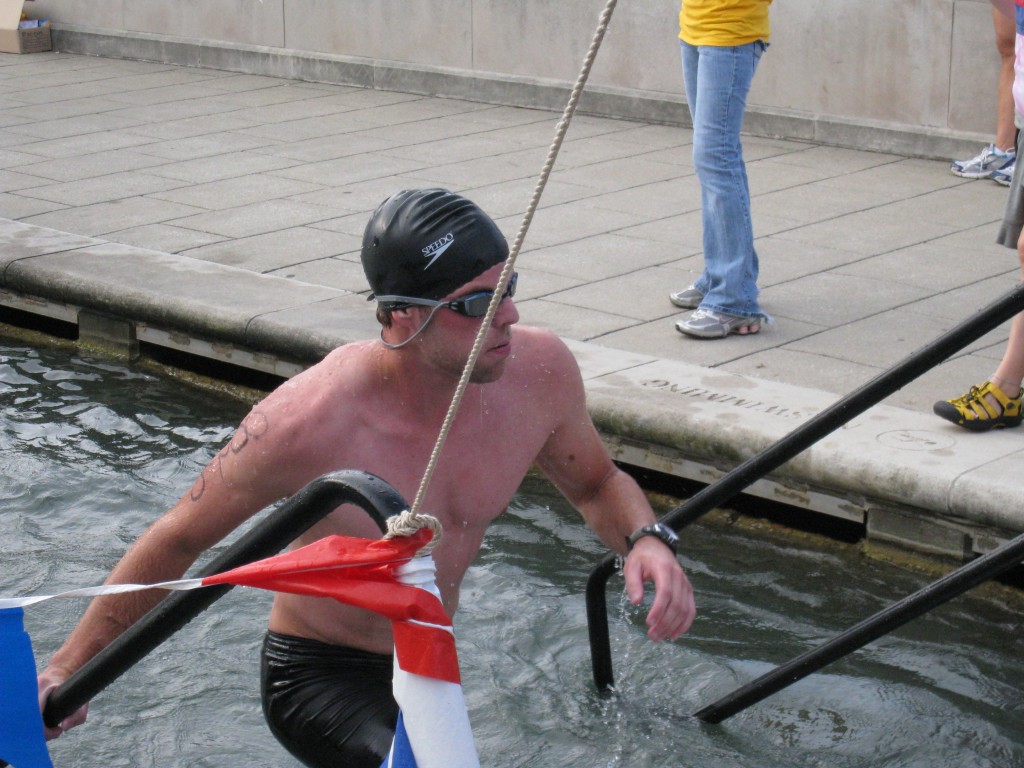 Out of the Swim

I climbed out of the canal and off to the transition area. This was a lot better laid out than the last one and I had gotten there early so my bike was on the end of the rack. I threw my shoes on, grabbed my helmet and ran my bike out like a speed demon onto the biking area.

As soon as I got out of the transition area, I tried to jump on my bike and go. Unfortunately, I had forgotten to put my bike in the lower gear so as I tried to start pedaling, instead of taking off, I awkwardly tried to get enough leverage to move my pedals forward. I eventually got it but it resulted in me awkwardly half-falling off the bike, collecting myself, standing and restarting the whole process before I was finally able to take off. 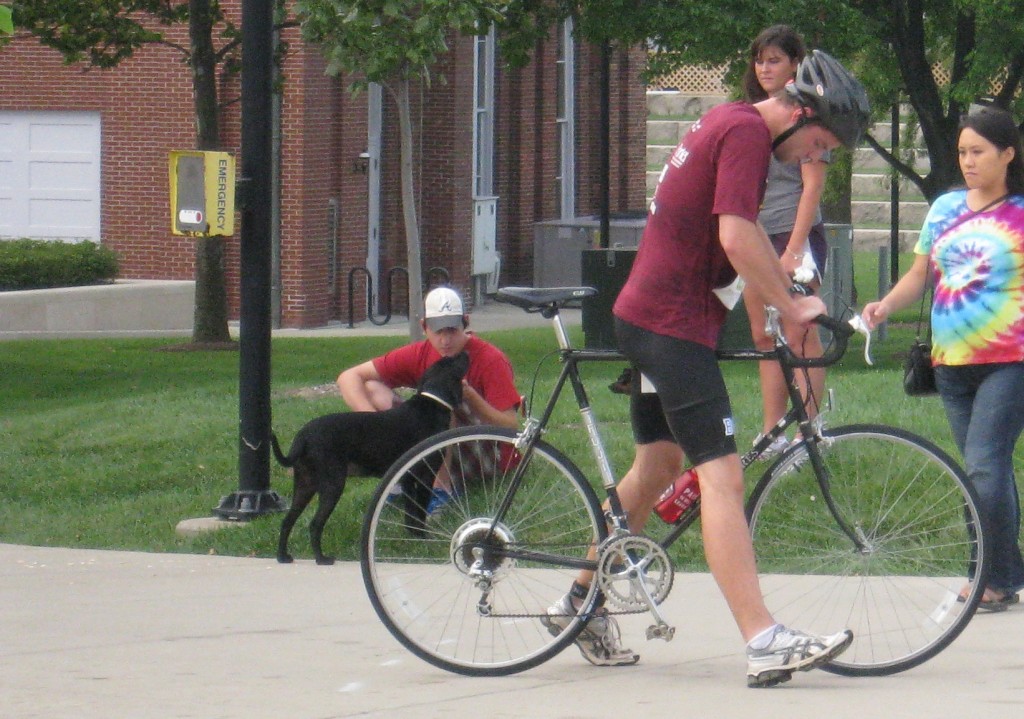 Remembering How to Ride my Bike

I started biking and was going at a pretty good clip. The race wasn’t on the nicest of the roads [a lot of bumps & even a few train tracks] and there were a lot of turns, but it was pretty fun and with my new $150 bike, I was going faster with a lot less effort. I’m actually almost glad I experienced a race on a mountain bike because the whole race I was just grateful that I didn’t have to ride it again. I passed a few mountain bikers and instead of laughing to myself about their situation, I had a lot more empathy for them, cause I know how hard it was.

About halfway through the course, I had something happen to me that hasn’t happened since I was 12. I got my shoelace stuck in my pedal. Apparently while pedaling, my shoelace came untied [I don’t have bike shoes] and started to wrap around the pedal as it rotated. It wrapped around 2 or 3 times before it started tugging on my shoe and made me notice. I couldn’t keep pedaling because my shoelace was attached to my shoe, which in turn was attached to my foot. I tried my best to coast to a stop and did another awkward half-fall off of the bike on to the side of the road. Once I had the bike on the ground, I was able to unwrap the shoelace, re-tie it and tuck it in my shoe so it wouldn’t happen again. The scenario probably took a minute at least off my time and more than a few notches off my ego, but I got back up and soldiered on.

Having to stop and fix my shoe while people passed me actually gave me good motivation for the rest of the biking portion. I noticed all the people that had passed me while I had my shoelace-gate and made it my goal to catch back up to them. I eventually did and even passed quite a few.

I was hoping to take 5 minutes off my time with the new bike, and if I said that if I could take off 10 minutes I would be ecstatic. Well I’m more than ecstatic. I finished this section in 38:57. 15 minutes faster than my previous time!! [52:58]. Thank you new bike! To be fair, this Tri Indy was about 1 mile shorter than the Valpo Tri so it wasn’t entirely a time comparison. I checked out the mph to get a better comparison and while I was chugging along at 14mph for Valpo, I averaged 19.1mph on Sunday.

When you factor in the wasted time I had awkwardly getting on my bike with the time spent on the side of the road untangling my shoelaces, I’m pretty happy. The bike performed really well and while I wasn’t the top bike time by any means, to improve as much as I did is really exciting.

Pretty straightforward transition. Dropped my bike off, dropped the helmet and headed off for the run. Total damage? 43.2 seconds. Good enough for the 15th best T2 time in the whole race [503 total participants]. No big deal =).

Thankfully I had a little more experience with bricks [biking & then swimming] this time around than before so even though the running portion sucked for the first mile, I knew that was the case beforehand. I stuck that first mile out until I was able to get some legs back and actually start running rather than just hobbling along. Unlike my goal of simply surviving the run of the last race, I wanted to finish this one in less than 28 minutes. I started motivating myself by picking off people to pass one-by-one and I ended up doing just that. 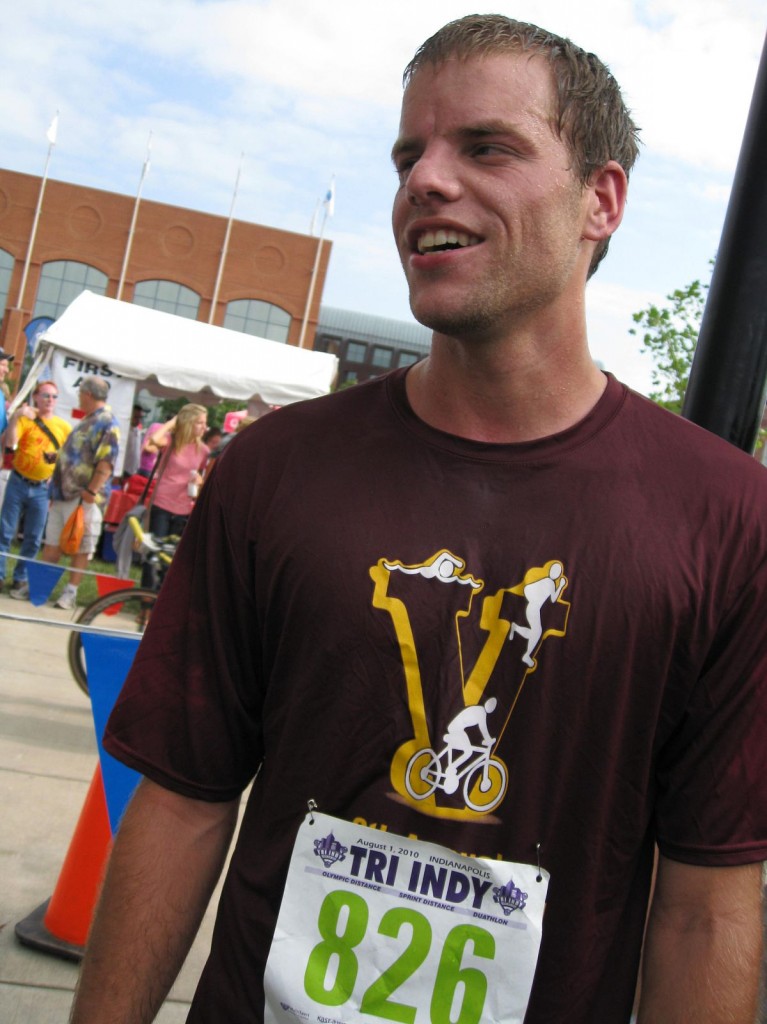 I’m very happy about this race. I literally improved every single time except for my swim. I’m okay with that considering the conditions and the fact that I wasdumb and didn’t time myself. I was amazed at how much faster I went on my new bike. I was about 5-10 minutes faster than my expectations [shoelace-gate and all] that my media crew actually missed me because I did the course so fast that they weren’t ready for me. While some of the distances were different, the time I made up was almost exclusively in the bike portion, while my faster run & slower swim time cancelled each other out. I’m very happy with the overall time and am really encouraged by how things went. I felt like I had a much better idea of what I was actually doing and am starting to get really pumped for Chicago. Can’t wait!

Thank you guys for all the support via twitter & facebook. I’d talk more about how awesome I think you all are, but you already know that.