You are here: Home / 777 / The Two Oceans Marathon: The Final Ultra

The last time I was in South Africa was 3 years ago for the Comrades Marathon, before I started 777.

In South Africa, there are mainly 2 races – Comrades + Two Oceans and they are Big Deals. Capital B. Capital D.

So while I might come back for Comrades in the future, I wanted to see what the hype was for Two Oceans was, so back in December, I signed up for the race. I told Alan Perlman (one of my longest internet friends) #nerverush, that I was going to do this race and it seemed awesome.

He responded by sending me an email confirmation for his race entry about 2 days later. #giddyup

I didn’t realize it back in December, but after the past couple of months running off to 15-odd countries and doing miles upon miles alone in the wilderness, I would be very grateful to have a friend there somewhere in the mix, feeling the same pain I was.

We took an Uber to the start line and did the 30 minute wait-in-line-for-a-porta-potty-dance that’s required for all major races these days. Part of the reason I like ultras is usually if you have to go to the bathroom, you just run off into the woods (TMI? deal with it).

After smashing a banana, we listened to the South African National Anthem which the entire crowd knew and I felt like I should have studied since my last race here. 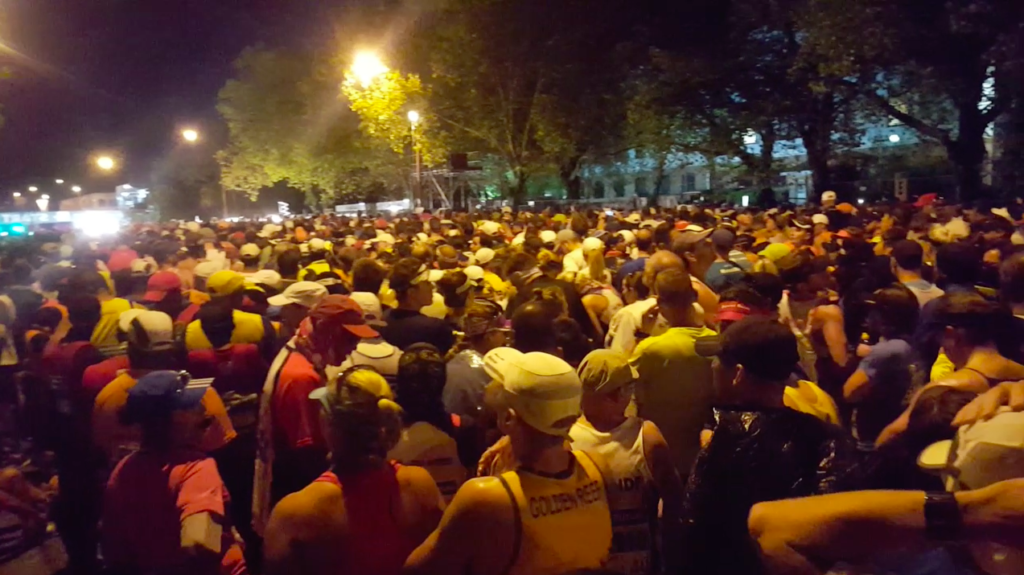 The first 30k were pretty flat. We had a blustery headwind, which is expected in Cape Town, but the majority of the running of the first half of the race is pretty flat, so it didn’t affect me too much and I tried to make up some time.

I went out at a 9 minute clip fueled by the crowds and the adrenaline of the race. I was happy to be banking some time early in the race that I would be using later on when it came to the hills.

The groups were “supposedly” going to thin out after the first 5-10k, but while it was definitely easier to run some of the race after the first few miles, there was never any open road space the entire race – much in contrast to Finland or Antarctica – where I was running completely alone in some cases.

While navigating the groups of people did make some sections difficult – especially navigating the water stations – they did make it easy to maintain your pace since you were running with a school of other fish – or runners in this case.

About 20k in, I felt a slight tweak in my hamstring. I got worried. All I could think to myself was:

I AM NOT GOING TO NOT FINISH THIS RACE

I kept running and paying attention to my hamstring, but it didn’t get any worse, so I kept pushing. This was not going to stop me.

When we hit 30k, we started to climb Chapman’s Peak. I had scouted the race earlier and knew that the first part of Chapman’s was a nice climb but nothing too crazy. However, After that, it pretends to flatten out before doing these huge, sweeping uphill, S curves for another several kilometers.

Something like this (except this is looking down and we were running up). 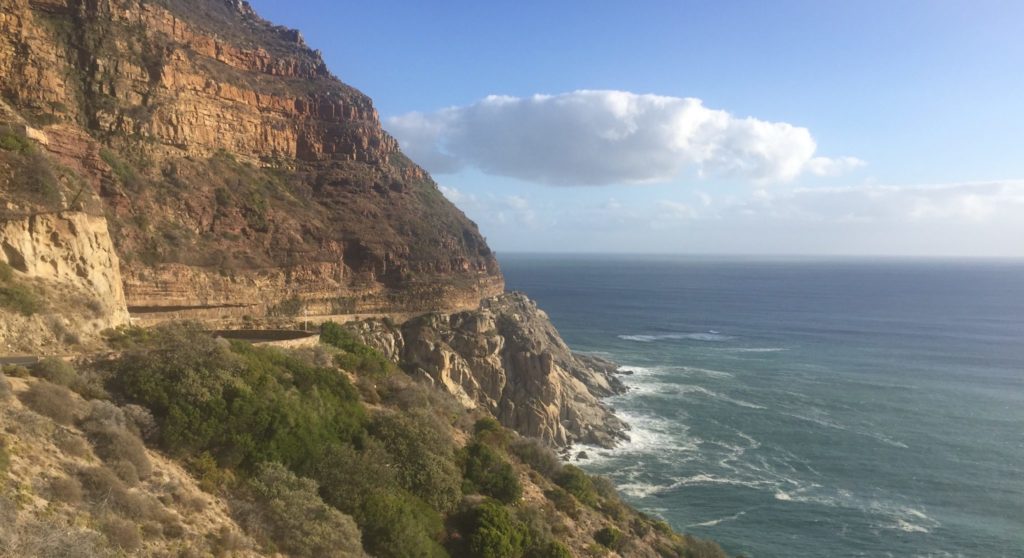 That was good information to know.

When we hit the first climb, I felt pretty good power hiking it, but as we pass the flat section and hit the second part of the climb, I was not happy.

It was an endless hill that reminded me of Comrades, but it was long – and you couldn’t see the top.

So, each time you’d come around the corner at the top and think you were done, you’d realize there was a whole other S curve waiting for you to climb. Sure, it had nice views, but still, another hill waiting, then another, then another.

Nevertheless, I put my head down, relished in the fact that I’ve done far worse than this (at least this was a road!) and used the section to work on my power hiking and got after it. 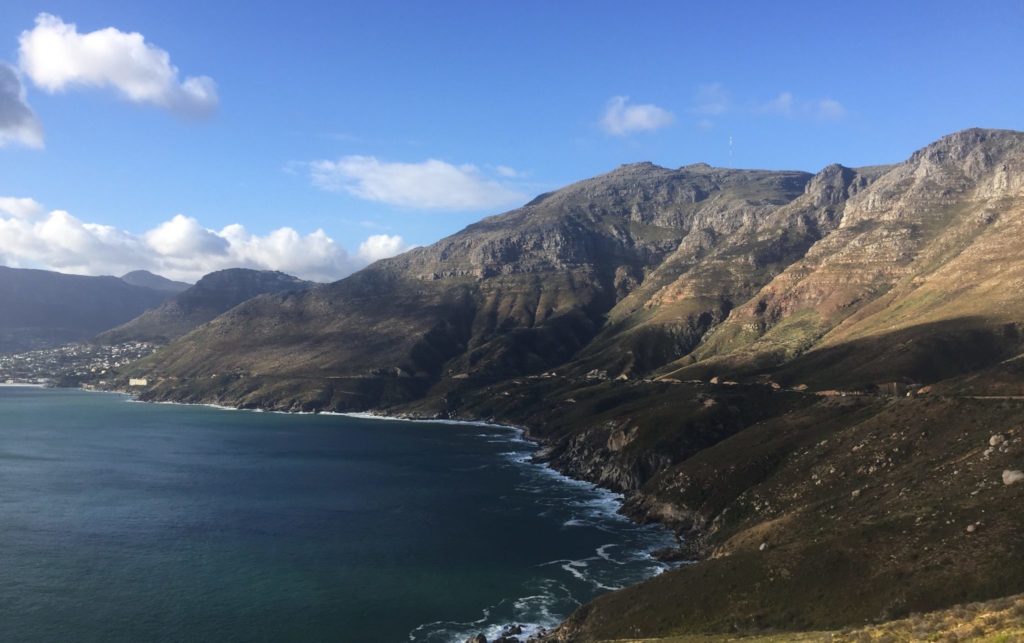 After we reached the peak, we turned around the corner. While I wanted to make up some time on the downhill, I was careful not to hammer too much and completely obliterate my quads on the way down. I still had more than 15k to go!

While cruising down the other side of the peak and coming into Hout Bay, I did some math games in my head to figure out the various times that I would be able to finish at.

When I realized I could walk the rest of the way at a 20 minute pace and barely make it, I was able to relax a bit and just focus on running. I wasn’t even doing 20 minute miles when I was slogging through snow piles in Finland, so I’d be okay.

After we cruised through Hout Bay, we started the long climb towards Constantia. One that our cab driver mentioned that cyclists think is one of the toughest in South Africa. Not because it’s particularly steep, but it’s a long, long slow incline that doesn’t seem to end.

After the last big climb into Constantia, we got to the top and there was a marching band up there to celebrate. Neat

I found out later that the course used to be slightly different and finish all the way downhill, which would be nice.

However, in recent years, they changed it to end at the University which meant that there were 2 or 3 other mini climbs before we finished the race. Fun.

These weren’t anything like the other climbs we had hit, but after 30-odd miles, your brain just starts to yell “REALLY?” to no one in particular.

I knew that I had a few odd miles left and I wanted to push it, so I did my best to keep up the pace and kick it through the end as the crowds picked up. I came through the gates and there were about few hundred meters of stands full of people cheering as I cruised through the finish line.

Overall, I felt really happy with the race. It wasn’t the fastest I’ve ever run, and my power hiking game on roads needs some work, but considering the elevation gain and some of the other factors of the race, I felt I held on for a pretty decent clip and am very, very happy to finish the race and the last race of 777!

When you add in to the factor that it was on roads, we had an incredible South African crowd and Alan showed up to run it (he killed his race), and it was an awesome finale race to finish with 777.

I'm pretty sure @alan.perlman is my original "internet friend." We met in 2010 after starting our blogs and immediately connected, talking about traveling the world, business ideas and BASE jumping. #nerverush . Since then, he's become one of my go-to random-adventure friends – whether that's an impromptu undocumented marathon around New York or just a climbing session that I'll inevitably embarrass myself at, he's always up for it. . I remember registering for @2oceansmarathon back in December and telling Alan that it was supposed to be an awesome race. He responded a couple days later by sending me a confirmation email for his entry and saying "giddy up" (I'm not sure if he actually said this, but he probably did). Just like that, he was in, despite never running an "official" ultra before. . The more and more I do hard stuff, the more I appreciate the friends around me that are "in", those that are up for the adventure before even knowing all the details. They'll say "yes" and figure it out later. . Alan's off to Namibia to do a post-ultra cool-down by wrestling a Hyena or some other African mammal because that's just what he does, but huge shoutout to him for coming all the way out to South Africa, beasting the race and hanging out for the week in Cape Town. Let's do it again sometime soon!

First of all, the RACES ARE DONE!

It feels GOOD to finish what you started – even if it took me months and months longer than I originally planned.

Over the next couple weeks, I’m going to be sharing a few more things from the project including the Finland race video (this might be my favorite yet), the Two Oceans video and the video from my visit to Laos!

But, there’s another order of business to take care of: The 7 Schools

Next week, I’ll be sharing a new video about the trip to Laos and the work being done on the ground to show where all the money raised is going towards.

We’re looking for a few more donations, but we’re almost there and it’s even much closer than it looks because for the rest of the project, I’m matching all donations $2 for $1.

Feels good to be done 👊🏼💥 #777project . I didn't realize till afterwards that there were 3 girls posing in the sign behind me. They played it off pretty well, huh? . 📸 by @jennysansouci

It’s been a whirlwind the past few months to finish these races and I’m still a bit in shock that I finally got the last one done. I’m going to work on a post-mortem for the entire racing portion of 777, but over the next few weeks, I’m going to be committing to finishing out the fundraising and sharing the stories of the work that PoP is doing beyond the fundraising.

If you’ve been following around for any amount of time (or especially since the beginning), thank you for reading and thank you for contributing. It means a ton.

I’m glad you asked! There are two ways you can still help out with the 777 Project

Like I said, I want to put my money where my mouth is and show that small actions can add up quick. That’s why I’m double-matching all donations for the rest of the project. If you you haven’t yet contributed to the project, I’d love to 3x your donation here.

If you’ve already contributed to the project, I’d love for you to share the project with a friend. Maybe together we can inspire them to push their limits and do something impossible.

The 777 Project is an endurance, adventure and philanthropic initiative by Joel Runyon & IMPOSSIBLE to run 7 ultra marathons on 7 continents in order to raise money & awareness to build 7 schools with Pencils of Promise and provide opportunities to those for whom a basic education can be impossible.

As of this post, I’ve run 7 ultra marathons on 7 continents and we’ve collectively raised $143,842 – enough to build 5 schools – and counting! You can see previous races recaps + videos below.

I am matching all donations through IMPOSSIBLE through the end of the project $2 for $1. If you’d like to get involved, you can donate here and I’ll match each dollar of your donation with $2 of my own.