You are here: Home / Adventures / I’m Jumping Out Of A Plane At WDS – Who’s Coming With Me? 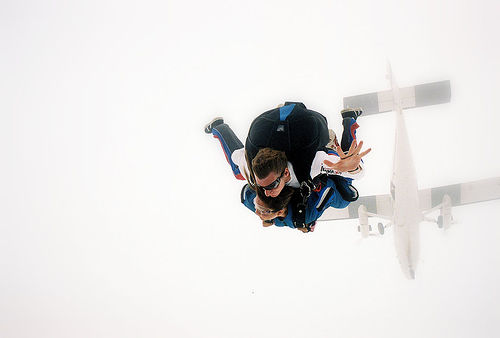 Most of you know already about the World Domination Summit. If you don’t, you can find out a lot about it here.

Here’s the one sentence synopsis of the event – “In June 2011, a small army of remarkable people will converge on Portland, Oregon for a weekend of strategizing and adventure.” The World Domination Summit [WDS] is a conference being organized by Chris Guillebeau, so like most things he does, it should be nothing short of amazing [no pressure, Chris].

I’m sure the actual conference will be lots of fun [it’s already been sold out 5 months in advance], and filled with lots of great speakers and interesting information. However, what I’m really excited about is hanging out with interesting people like Sean, Steve, Alan, Mark, Nina, Dusti, Matt, Mark, Chris, Nate, Matt, Adam, Dave, Jenny, Tyler, Tammy, JD and lots, lots more.

The cool thing about getting a group of adventure-centric people in one place is the opportunity to do a lot of adventurous things together. After talking with a few of them, I decided that I’ll be checking yet another thing off the impossible list and jumping out of an airplane [hopefully with parachute attached] while I’m out in Portland for WDS.

Jumping from heights is a scary ordeal, parachute or not, and one I’ve never done it before so I’ll be bringing some friends along with me in order to hopefully relieve the nerves. I’ve mentioned skydiving as a group to several people and I have gotten really great feedback from them, so I figured I’d open it out there for you guys.

Want to come skydiving with me in Portland at WDS?

Yes, I am announcing this almost 4 months out from the conference, but organizing a large number of people to stare death in the face tends to take some planning and I’m planning on being prepared.

So how about it? Are you going to the World Domination Summit this year? Are you just gonna to happen to be in Portland in early June? Do you feel like jumping out of an airplane with me and a bunch of other awesome people? If you’re even slightly interested in what’s going down, just click the link below to find out more information

>> Sign up here for more info on jumping out of a plane with me and lots of other awesome people.

Don’t worry, the form is not a final commitment and you don’t have to put down money yet, but I am trying to gauge initial interest so I know how much I’ll have to plan for and what dates may or may not work for people. This is one of the sure-to-be-many “unofficial” adventure activities going on at WDS, so I wanted to get a jump start on planning & numbers. No matter what those numbers do end up being, what I do know is this – there will be a small group of us that are going one way or another – even if no one else decides to come along for the ride.

>> Seriously, you should come jump out of a plane, it’ll be fun.

Not going to Portland in June? Don’t worry, while it won’t be as fun as being there, you can bet I’ll be writing about it here at BIT and you can still help make it an awesome experience even if you don’t go!

Here’s what you can do:

The more people there, the merrier – so pass this along and lets see if we can get a massive group together to jump out of a plane together in Portland!

>> Last chance! Wanna jump out of a plane with a bunch of crazy people in Portland? Click here.