You are here: Home / Fitness / The Women’s Guide To Triathlon

Today is the first ever guest blog post here at the Blog of Impossible Things. We don’t do these often (read never), but today’s post is special.

As I went to put together Impossible TRI, I realized that I could speak a lot to triathlon from the men’s side of the world, but there was still 50% of our audience that’d I’d be forgetting to address – all the women reading this who want to run a triathlon. So, while writing it, I asked Susan to step in on behalf of the women triathletes and tell it like is – no excuses allowed. With Susan’s regular columns at Competitor.com and No Meat Athlete as well as an Ironman and dozens and dozens of triathlon races under her belt, I knew she knew her stuff.

We decided her advice shouldn’t just be relegated to the triathlon guide, so I asked her again to step up and write a guest post – just for the girls. 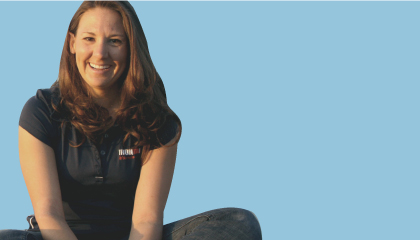 So, ladies, if you want to do a triathlon, but think you’re a little intimidated by the prospect of jumping into such a testosterone-drenched sport – Susan’s here to kick your butt.

Take it away Susan!

It’s Ladies Night at The Blog of Impossible Things!

I’ve kicked Joel out and taken over today with my feminine wiles (contrary to what my habits of peeing in bushes and blowing snot rockets may have you believe, I do have feminine wiles).  I recently had the delightful opportunity to work with Joel on Impossible TRI, and upon the release of the book, both of us heard the same thing from many women:

A lot of y’all are scared of triathlon!

What gives, girls? Look, I know the sport seems intimidating. If you go to any triathlon, it’s a real sausage fest – there are far more men in the sport than women. But that doesn’t mean women can’t do it. Women can, and should, be a part of the triathlon community. Listen, we were built for the pain of childbirth…surely we can handle a little swim/bike/run, right?

I’d like to help you get started. In addition to my contributions to Impossible TRI, Joel has asked me to share a few tips for women looking to get started in the sport:

Because triathlon is still a relatively new sport, manufacturers are still learning a lot of things – specifically, that making triathlon gear for women is more than just making men’s gear in a smaller size and dying it pink. Though our gear looks identical, my partner, Neil, and I can’t exactly swap bike shorts without consequence. Eliminating the ick factor (dude, his sweaty balls were in there), Neil’s gear is constructed for men. It won’t work for my – ahem – delicate flower.

Female-specific bike shorts have a chick-friendly chamois (the padded part), a wider cut in the hips and thighs, and bigger leg openings. There’s also female-specific triathlon suits (with built in sport bras), goggles (made to fit our smaller eye sockets), bike seats, and more. When purchasing triathlon clothing and gear, search for female-specific options.

Just because there’s female specific options doesn’t mean you have to purchase them. For example, when it comes time to purchase a bike, don’t let anyone pigeonhole you to the “women’s-specific” options. My first bike wasn’t women’s-specific; my current bike (a triathlon bike) is. There is a wide variety of bike sizes and geometry available for riders, and a good bike salesperson should be more interested in getting you on a bike that fits you and your budget, even if it is a so-called “men’s” bike.

If the thought of sharing a swim, bike, or run course with a bunch of aggressive, Type-A males intimidates you, consider women-only events until you feel more comfortable in the sport. SheROX, See Jane Run, and Athleta Iron Girl are just a few race organizations who put on triathlons specifically for females. Many bike shops and triathlon clubs have organized group rides and runs for females only, for those afraid of not being able to keep up with the guys.

…But Don’t Shy Away From The Guys!

For the longest time, I put off participating in my triathlon team’s co-ed group rides because I was scared. The rides were mostly attended by faster guys, and I worried I wouldn’t be able to hold my own with them. One day, on a promise from one of the guys that they wouldn’t leave me behind, I headed out on my first group ride and was instantly hooked. Even though the guys were faster than me, they motivated me so much that I wanted to stay with them, so I worked harder. Those guys knew how to push buttons I never knew existed. As a result, I became a much faster rider – and got a new set of big brothers in the process. 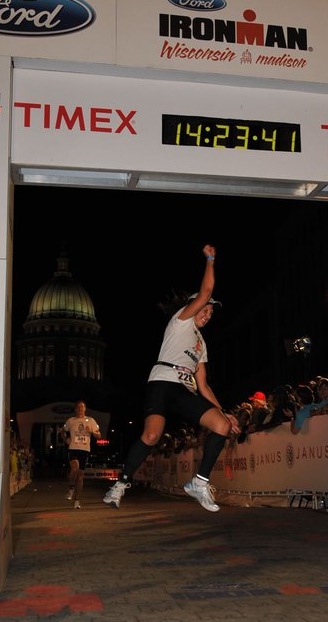 Though most guys are really cool and welcoming of women in the sport, some guys in this sport fear getting “chicked,” tri-slang for “beat by a girl.” This paranoia about being beat by the “weaker sex” causes some guys to live up to their anatomical namesake – yup, they can be real dicks.

I once did a triathlon where I ran alongside such a dick for a little bit. He was full of smack talk, and it was kind of intimidating at first. Eventually, though, his jokes about my running skirt and pink sports bra became annoying, and I decided to run harder just to teach him a lesson. I soon dropped him, and hit the turnaround of the run course long before he did. When our paths crossed again, he was struggling. I just smiled and waved as I dashed off toward the finish line.

The moral of the story? Don’t let the dicks intimidate you. If (actually, when) you beat those jerks, just smile and wave.

After all, it isn’t ladylike to gloat.

It’s time to stop being so scared of triathlon. Put on your big-girl pants and come join me at the races! Impossible TRI has training plans for girls (and guys) as well as interviews with myself and 4x Ironman and 15x 1/2 Ironman Hailey Manning. Got more lady-specific questions as you get started? You can always shoot them my way via Twitter (@SusanLacke).